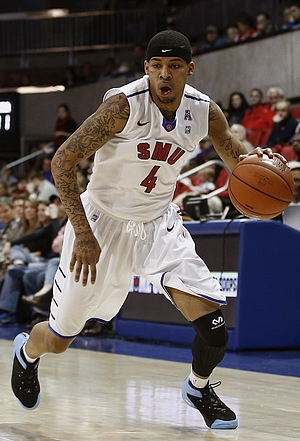 A 2013 McDonald's All-American, Keith Frazier was a useful cog as a freshman for SMU, despite playing just under 15 minutes per-game. Averaging 5.4 points and 1.8 rebounds per-game while shooting a shade under 40% from beyond the arc, Frazier provided valuable floor spacing for Larry Brown's Mustangs.

Standing 6'6 with just a 6'6 wingspan, Frazier has solid, but not spectacular size for a shooting guard prospect and still has plenty of room to get stronger. He is a fairly fluid, impressive athlete, flashing the ability to finish lobs acrobatically and beat his man off the dribble with his first step.

Frazier's main contributions offensively came as a jump shooter, as he flashed the ability to knock down shots with terrific consistency with his feet set. A whopping 88.3% of Frazier's field goal attempts in the half court were jump shots, of which he connected on 35.5% according to Synergy Sports Technology. That number is a bit misleading however, as Frazier shot an outstanding 42.3% with his feet set, but a poor 24.3% off the dribble, as he looks rushed when pulling up. Shooting the ball with terrific mechanics despite turning his lower body more than the average player when he elevates, Frazier is a great spot-up threat who is still developing the rest of his offensive arsenal.

When Frazier did get opportunities to finish at the rim, he showed terrific explosiveness, but his ability to get to the rim off the bounce in one-on-one situations and on the pick and roll remain very much a work in progress. Though Frazier's shot selection can be ambitious at times, he makes some solid passes to find the open man in SMU's offense. He may not have been overwhelmingly efficient, scoring .911 points per possession a year ago, but there's certainly plenty of room for optimism with regards to Frazier's offensive game moving forward.

Defensively, Frazier is not quite as impressive. He didn't bring much to the table as a rebounder and gets lost off the ball from time-to-time, but isn't indifferent on this end of the floor either. Frazier's size and athleticism give him some upside as a defender to go along with a decent motor. Even if his length if just average, he should improve on this end as he matures, something that should earn him more playing time.

Looking ahead, Keith Frazier will once again provide a long-distance threat for what should be a deep, balanced, and talented SMU roster during his sophomore season. Whether the Kimball product is able to up his usage significant remains to be seen, but an incremental season of growth as a slasher and defender, even in a small role, would help his standing from a NBA perspective.
Read full article