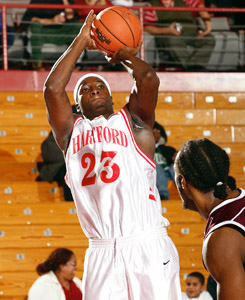 Mike Schmidt
@DraftExpress
Kenny Adeleke is still adjusting to the international game, though he played well. He was a force on the offensive glass, where he collected 5 offensive rebounds, and turned many of them into easy baskets. Adeleke has clearly been working on his game away from the hoop, and was making jumpers from all over the court during warm-ups. Unfortunately, he has not translated this improvement to the free throw line quite yet. Adeleke fouled out with 5:17 left in the game, and had 12 points to go with his 11 rebounds.
Read full article

Blogging Through Israel (part one)

Mike Schmidt
@DraftExpress
All of us at the pre-draft camp in Orlando were very impressed by Kenny Adelekes play, and he continued to play well for Galil. It was his first game, and his coach doesnt really know how to use him correctly, as they ran a lot of pick and rolls with Adeleke away from the basket. He did make 2 three point shots which was very surprising, but Adeleke was most impressive when down on the block. He was able to easily establish position, and scored with a left handed hook shot numerous times. Adeleke is usually a great rebounder, but was off last night in that regard. He also gave up inside position a few too many times on defense, but it will take him a while to adjust to the game over here. He picked up some cheap fouls by hitting the offensive glass a little too hard. Adeleke finished with 20 points on 7/14 shooting and 6 rebounds in 20 minutes before fouling out.
Read full article

Eric Weiss
@DraftExpress
In a camp full of disappointments, the one player that everyone in attendance can agree had a standout week is Hartford power forward Kenny Adeleke. Adeleke doesnt have experience at a big time college program on his resume, but that hasnt stopped him from being effective everywhere he has played this past year. That includes a senior season in which he challenged Paul Millsap for the right to be called the nations top rebounder, and a very impressive Portsmouth showing at which he was named to DraftExpress All-Tournament Third Team. Therefore, maybe it shouldnt have surprised anybody that Adeleke ended playing the best basketball out of any player in Orlando.

Adeleke certainly doesnt stick out from the crowd at first glance. With a round body and awkward open-floor gait, he almost appears out of shape. However, conditioning wasnt a factor when he started banging bodies in the paint. Adeleke has an impressive natural understanding of how to operate in the post, almost always appearing to be a step ahead of the competition mentally. He knows what he wants to do in the paint offensively before the ball arrives, and has already completed his move by the time any sort of help can get to him. He can rely on an assortment of hooks and scoop shots to convert around the rim. Adeleke has a relentless, physical nature to his game, relishing contact and never giving up on the glass. Despite seeming to be limited athletically, Adeleke gets off the ground remarkably well around the basket. He was a terror on the offensive glass here, and does an outstanding job of anticipating where a missed shot is headed. Simply put, there was no prospect at the camp capable of containing Adeleke around the basket.

So where does this leave Adeleke in terms of draft stock? After two impressive pre-draft camp performances in a row, it is hard to see him not getting drafted somewhere in the second round. However, there is some question as to how Adelekes game will translate into the NBA. He was able to dominate this camp with his physicality, but it must be emphasized that there probably werent very many NBA big men in attendance. It remains to be seen how effective the 68 Adeleke will be at operating amongst the trees he will find at the next level. Adeleke has significant work to do on his body, but he also looks like a player that will put the work in to improve that area. A toned up Adeleke can certainly carve out a niche for himself in the NBA, in a Reggie Evans-style role.
Read full article

Eric Weiss
@DraftExpress
Adeleke has been the best player in this camp by far. For the second consecutive day, Adeleke attacked the competition with a good-spirited intensity that got results. Adeleke is extremely vocal with his teammates on defense and plans out his attack strategy early in the possession. On one play Adeleke was defending against the much larger Frans Styn. Knowing that he couldnt challenge Styns release if he let him get on the block, Adeleke stepped away and waited for Steyn to turn into his drop step which he then attacked and forced Styn to travel by denying the dribble.

Offensively, Adeleke showed tremendous hustle and skill. His footwork is quick and decisive and he executes secondary moves so well off his pivot the refs assumed on 2 occasions that he must have traveled-not the case. Adeleke shot two beautiful left handed hooks after banging bodies with Eric Hicks, showing soft touch after impact. On another occasion, Adeleke scooped up a low bullet pass right off his shoe tops and finished in one fluid motion. His double jump and aggressive fight for every rebound was impressive. Adelekes best rebound came on a possession where the perimeter inlet man faked the pass and shot the ball, which put Adeleke behind his man and the basket. Adeleke was able to twist around his man and tip the ball to himself before going up for another easy bucket. This was the best individual performance to date.
Read full article

Eric Weiss
@DraftExpress
Adeleke was one of the strongest interior players in the tournament offensively. His interior scoring drew continual double teams and really helped to open things up for the guards on his team. By the second half of his first game, Adeleke was a natural target for almost every offensive set. He needs to work on his agility/mobility more than anything else. Dropping bulk and adding quickness and range of motion could really make him a dangerous offensive weapon. Adeleke needs to show a competent 12-15 foot jumper in order to really set up his game, though, something he didnt show in these games. Adeleke has an NBA post game. His assortment of fakes, footwork, and finishing touch were a cut above. Defensively, Adeleke is very vocal and worked extremely well with his strong side wing defender. Communication and teamwork like this are key attributes for any player.
Read full article