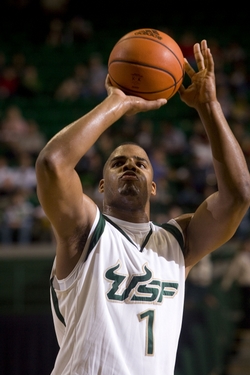 What We learned from the NBA Draft Measurements and Combine

Jonathan Givony
@DraftExpress
Gransberry's team finished the season all the way back in early March, meaning he had nearly three months to get himself in the best shape of his life before coming to the pre-draft camp. Instead, he posted the third highest body fat percentage in pre-draft camp history, only behind Oliver Miller and Marco Killingsworth. Measuring out at 6-6 ¾ without shoes and without an incredible wingspan or standing reach to compensate doesn't help, even if he can clearly rebound the ball.
Read full article

Joey Whelan
@DraftExpress
Kentrell Gransberry was a disappointment this week, and even despite garnering a double-double with 13 points and 14 rebounds in his final game of the tournament, there were clearly some issues with the big mans game. Gransberry looked out of shape and at times struggled to keep up when the pace of play would pick up. He struggled in the post, showing very poor footwork and an underdeveloped back-to-the-basket game; the majority of his points during the three games came as a result of nice feeds inside by his teammates.

Perhaps most discouraging though was the body language we saw from Gransberry. Towards the end of his final game he looked to be pouting on the court and started to get very chippy with the opposition. Gransberry was tagged with an intentional foul and could have easily been hit with a second on a play where it appeared he threw Sundiata Gaines to the floor on a driving attempt. His terrific hands and timing for rebounds were on display in this last game, particularly on the offensive glass, but were beginning to wonder if that will be enough to carve out a spot for him in the league. He looked fairly underwhelming in person.
Read full article

Joseph Treutlein
@DraftExpress
With his college career coming to a close in about two weeks, this is probably as good a time as any to offer up a progress report on Kentrell Gransberrys senior season. South Florida went through a coaching change this past summer, and although they werent all that much more competitive in the Big East, Gransberry seemed to improve to a certain extent on an individual basis under Stan Heath.

Gransberry was relied on very heavily by South Florida offensively, quite a bit more than hell be expected to at the next level. Over 50% of his offense came on post-up situations, with the rest coming primarily from offensive rebounds and cuts to the basket. Gransberry was not terribly efficient finishing his post-up moves, as hes mostly a below the rim player, but he did get to the free at an excellent rate (7.5 attempts per game). He doesnt have anything resembling an outside jumper, as you can probably guess by the 53% he shoots from the free throw line.

Gransberry does a good job using his strength to establish position down low, backing players down, and being fairly patient waiting for plays to develop. He lacks any real quickness to go around defenders or the explosiveness to go up and finish strong at the rim, but possesses a solid jump-hook and drop-step he can go to, and is extremely aggressive trying to make his presence felt, initiating contact and using his body well. Almost everything he does comes with his right hand. Hes also a solid passer out of the post, which is nice considering how big of a role he had in this offense.

Gransberrys best attribute as far as the NBA is concerned has to be his rebounding ability. He is averaging 11 rebounds per game this season, and his 13.9 per-40 minutes pace-adjusted ranks him 8th in that category amongst all players in our database. He was actually better in this category last year, at 16 rebounds per-40 minutes pace adjusted.

Regardless, he does a phenomenal job getting a body on players and boxing out down low. He has terrific timing and anticipation skills, and his excellent hands and strength let him do the rest. What Gransberry lacks in explosiveness he makes up for with sheer tenacity, going after every rebound with the type of ferociousness that epitomizes all great glass-cleaners.

Defensively, Gransberry cant be considered anything more than average at best for a potential NBA power forward. His lack of quickness is very obvious both in the post and especially on the perimeter, where he struggles to move his feet and stay in front of players. Gransberry would be well served to shed a good 20 pounds leading into the pre-draft process, as hes clearly carrying a great deal of extra weight that he just wont need at the next level. His conditioning obviously isnt the best, and this has hurt South Florida on a couple of occasions this season in close games, as their star player just wasnt able to perform up to his maximum potential due to fatigue.

Gransberry is going to have to endear himself to scouts at the pre-draft camps, starting at Portsmouth and continuing in Orlando. He has the type of five on five game that doesnt translate all that well to private workouts, so he would be well served to take advantage of any opportunity he gets to show himself in front of NBA executives in a team setting. There is a spot in the NBA for players like Gransberry who can get after it, generate extra possessions for his team, and play within himself offensively, but hes not a sure bet to make it at this point. He should definitely take advantage of the extra time he has compared with others to prepare for the draft, and get himself in the best shape possible.
Read full article

Joey Whelan
@DraftExpress
It has been a well traveled few years for Kentrell Gransberry. The Louisiana native began his college career at the junior college level starring at San Jacinto College for two seasons. As a sophomore, he led the JUCO level in rebounding, at 13.7 per contest. After San Jacinto, Gransberry enrolled at LSU, where he would only manage two minutes of playing time during a preseason game; he would soon thereafter transfer to South Florida where he became eligible at the conclusion of the fall semester (he missed the first seven games of the season). After putting up impressive numbers last year (15.6 points, 11.4 rebounds), Gransberry is set for his first full season with the Bulls.

Standing only 69, Gransberry isnt that tall for the power forward position, but at 270 pounds, he has a frame that can certainly hold its own physically in the paint. He is very strong, able to bull through opponents and rip down rebounds with tremendous authority. Gransberry runs the floor pretty well for a player his size, but he doesnt have great quickness or explosiveness.

As one would expect, Gransberry makes his living in the post offensively. While his 15.6 points per game is a very solid mark, dont let it fool you, Gransberry is not a go-to low post scorer. He was forced into the role simply because of South Floridas overall lack of scoring ability. Gransberry has a very underdeveloped post game. While he does a great job sealing off defenders and establishing position, he struggles from that point on. He shows some signs of a developing a drop step move, but more often than not takes a quick dribble into his defender to create space, and then throws up a shot, often before he is square. Gransberry has average touch around the basket and has a lot of his shots blocked due to his lack of vertical explosiveness. Adding some head and ball fakes to his repertoire would help in this area.

What can be said of Gransberry is that he shows a tremendous amount of hustle, especially on the glass. He averaged better than four offensive rebounds a game, and picked up a lot of easy baskets or trips to the free throw line as a result of his efforts. Scouts will definitely like the fact that Gransberry averaged better than six free throw attempts per game last season; they wont like his 55.7% shooting from the line, though. Gransberry seems to have a pretty good sense of how to move around the paint without the basketball, and as a result was the recipient of some nice open looks over the course of the season. The lack of a true point guard on the team though did limit the number of times Gransberry was passed to in these situations however, and you have to wonder whether he was being sold short by that fact at times considering that hes not a great shot-creator himself.

On defense, Gransberry suffers at times from a lack of athleticism. While he is a tremendous rebounder due to his positioning and strength, he needs to improve in other areas of his game. His lack of quickness makes it easy for more versatile post players to beat him off the dribble, and it also renders him ineffective most of the time as a help defender. His poor leaping ability makes it easy for many players to elevate over him, which explains his .5 blocks per game last season. If nothing else though, Gransberry is a big, wide body that is tough to get around when posting him up. He holds his ground fairly well, and doesnt often bite on fakes.

Gransberry has a lot to improve upon in his game both skill-wise and physically. What does need to be noted about Gransberry is that he is being asked to do things at South Florida that he wouldnt be by an NBA team. There he would be one of the last scoring options, not the top one, and his responsibilities would be more limited to rebounding and playing tough defense, which he is clearly better suited for. Another strong showing this year by Gransberry will be enough to get him invited to the pre-draft camps at the end of the season, and hell have a chance to really make a name for himself if he brings his typical hustle.
Read full article