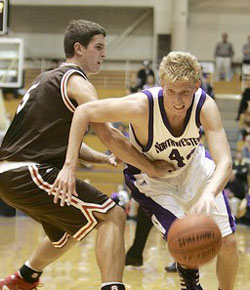 Joseph Treutlein
@DraftExpress
Northwestern's Kevin Coble is one of more unknown prospects in high-major basketball; he also happens to be one of its most productive players. Last season he made the admirable decision to skip the first two months of his team's season in order to be with his mother as she fought breast cancer in Phoenix, Arizona, which undoubtedly affected his production when considering his sophomore season as a whole.

Capable of playing multiple positions at the collegiate level, the 6'8, 200 pound Northwestern junior averaged 15.9 ppg (48.1% FG, 38.9% 3FG, 81.3% FT), 5.4 rpg, and 1.8 apg last season. Though his NBA outlook is not extremely bright, Coble has the chance to emerge as one of the best players in a very weak Big 10 as well as one of the better shooters in the country. 34 and 37 point games against Michigan and Indiana (shooting a combined 26 of 34 from the field) gave us a glimpse of just how productive Coble can be when he catches fire on any given night.

Standing 6'8, but possessing a very slight frame, Coble projects as a shooting specialist at the next level. The real problem, however, is that he lacks NBA-caliber quickness and athleticism, which will likely always limit his long-term upside ultimately. Still, there have been plenty of players to make the NBA after finding their unique niche, which is exactly what Coble must now focus on.

Offensively, Coble does a majority of his damage shooting spot up jumpshots, which, according to Synergy Sports Technologies account for 41.5% of his offense. Despite the good reputation that comes along with a 38.9% perimeter shooting percentage, Coble's shooting mechanics are far from perfect. He has an unorthodox looking jumpshot, bringing the ball up from his chest and releasing his shot far away from his body, deliberately but fairly quickly; he lands with his legs far apart and does not get nearly as much elevation as a player of his size should. Regardless, when given a second to set his feet and take aim, Coble is absolutely outstanding on the catch and shoot, which makes him quite a threat on the perimeter considering his excellent size at 6-8.

Arguably Coble's largest improvement last year was his expanded offensive repertoire. While he still attempted over four perimeter jumpshots per game, he showed an expanded mid-range game, using fakes and pull-up moves to get his shot off. He does not have a good first step, but he did improve his ball handling to the point where he was able to somewhat overcome his athletic deficiencies. Similarly, while he lacks the bulk to take much contact around the basket, he did a slightly better job of slashing to the hoop, though this is an aspect to his game that displays limited potential due to his poor physical tools. His post game is similarly developing. He'll likely never be strong enough to bang in the post in the physical Big 10, let alone the NBA, but Coble was able to score in the post last year thanks to some decent moves, including an improved turnaround jumpshot.

Arguably his biggest asset besides his shooting, however, is his basketball IQ. Coble is a smart player who passes well in the perimeter as well as from out o the post. He moves extremely intelligently, knowing how to get open off of screens (10.3% of his offense) and by cutting (22.6% of his offense). Sometimes he does not know his limitations, particularly attempting shots off the dribble, but for the most part he is a very smart basketball player.

Defensively, he uses his length well to harass shooters on the wing and to get into passing zones, but outside of that, his athletic limitations, particularly his poor lateral quickness, will never allow him to be a good defender: even at the collegiate level. Considering the quickness and athleticism of NBA guards and wings, Coble will be an incredible defensive liability should he make it to the next level.

There has been talk of shooting specialists like Kyle Korver, Jason Kapono, and Steve Novak when discussing Coble's future (although he's not quite at that level yet), and while he will always get his fair share of looks considering his perimeter prowess and productivity in the Big 10, the odds will be very much stacked against him. This season, he must improve his defense and continue to put on nightly scoring exhibitions if he wants a look in the future. It is very safe to say that Coble will be a four-year college player, but at this point, it is essential that he maintain relevance in the eyes of NBA scouts by producing heavily.
Read full article

Joey Whelan
@DraftExpress
In an absolutely loaded freshman class last season in the Big Ten, there was one name that probably came a surprise to most on the Big Ten All Freshman team: Northwesterns Kevin Coble. Not exactly a household name, the wing posted averages of 13.4 points, 5.2 rebounds, and 1.6 steals per game while shooting a sizzling 49% from the field and 39% from beyond the three point arc. While these numbers may not blow you away on first glance, they are downright outstanding for a player who wasnt even considered a top 300 recruit nationally and whose next highest offer besides Northwestern was mid-major Pepperdine.

The ability to shoot the ball is what is ultimately going to land Kevin a job playing professional basketball somewhere. While he does not get much lift on his jump-shot, his smooth, quick release allows him to consistently get his shot off over more athletic defenders. Combine that with the fact that he is 68 and has NBA range, and you see why he caused problems for so many opposing players last seasonparticularly playing in Northwesterns Princeton Offense. Although he does most of his damage as a catch and shoot player, he also showed that he can score from midrange regularly just as well. Coble is comfortable going either way, can shoot off of the dribble, and proved that he can take defenders off of the dribble when intensely pressured on the perimeter.

While shooting is surely the strong point of Kevins game, he also showed the ability to post up a bit and score points from the blocks. He doesnt have the post game of a traditional power forward (the position he played last year in Northwesterns office), but goes to a plethora of shot fakes and turnaround jumpers to score his points in the pivot. Like when he is playing on the outside, Coble fully uses his height and length to get the ball up over bigger players when placed within 10 feet of the cup.

Showing potential as a scorer, Coble could be much more deadly if he would improve upon his marginal ball-handling abilities. While he can put the ball on the floor one or two times n a straight line when pressured and get to the rim, he is unable to create for himself regularly off of the dribble in isolation situations. Preferring to go with a pick and roll, it is not uncommon for Coble to catch the ball and wait for a ball screen to come, instead of attempting to put the ball on the floor in isolation situations.

Athletically, Kevin is already beginning to face some problems when matched up against some of the more athletic players that the Big Ten has to offer. He is not overly quick and is a really poor leaper, playing the game well below the rim. Given the style of his game and the fact that he is a lights out shooter, this might not as big of an issue, proven by the fact that marginal athletes such as Kyle Korver and Jason Kapono have established themselves as players who will be sticking around the NBA for a long time to come. This is probably the route that Coble will have to take.

Defense is the area of Cobles game that will be under the most scrutiny, given that he will be forced to guard perimeter players at the next level. In Northwesterns defensive scheme last season, he usually guarded the opposing teams power forward when the Wildcats were not playing zone defense. While his gritty play was enough to pester some posts, there were many times in which the Arizona native was just too weak to keep up with stronger post players. In the very few times that we did observe him defending on the wings, it was apparent that his lateral quickness surely needs to improve if he hopes to reach his potential at the next level. The length that Kevin possesses really comes into play on the defensive end, however. His tremendous wingspan allows him to get his hands on a ton of balls and alter opposing players shots, despite his very limited quickness and leaping ability. The numbers back this up as well, with Coble averaging 1.6 steals and nearly one block per game.

In terms of intangibles, Kevin has everything you could ask for out of a player only 19 years of age. He moves incredibly well without the ball, plays hard every time he is out on the floor, and exhibits outstanding shot selection. Within five minutes of watching Coble play, you realize that this kid has received some outstanding coaching throughout his life and really knows how to play the game. The basketball IQ that hes blessed with allowed him to be one of the best freshman in the conference last season, despite being a limited player athletically.

More recently, some unfortunate news came out regarding Coble and his family. Kevins mother Carlys (who attended every one of her sons games last season) was recently diagnosed with breast cancer, and Kevin decided to go back to Arizona to be with his mother during these trying times. The university and the NU coaching staff have allowed him to take an indefinite leave of absence from the team, but Coble will be eligible whenever he is able to return to the court.

With the promise that Coble displayed last year as both a shooter and pure scorer, he will certainly be on the radar of NBA personnel whenever he takes the court this year. With development athletically and in terms of putting the ball on the floor, it is certainly not out of the question for Coble to develop into a Steve Novak type prospect by the time his tenure in Evanston is over, although it appears that it will be a while before he is in position to consider the NBA a viable option.
Read full article