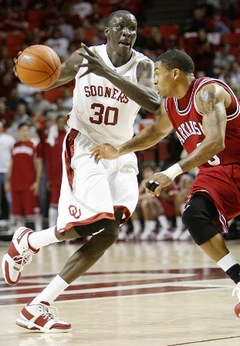 Joey Whelan
@DraftExpress
After his strong first day performance, Longar Longar really fell off in his last two games, having trouble catching passes with his poor hands and not showing the best coordination or balance, really failing to make a strong impact for his team. His reaction time also seemed to be a bit on the slow side. With his physical tools, he should have a chance at making the NBA in the future, but due to his advanced age for his class, many will question how much upside he has left.
Read full article

Joseph Treutlein
@DraftExpress
Longar Longar isnt your typical college basketball senior, as hes 24 years old, has only been in the United States since he moved here from Africa in 1998, and didnt start playing basketball until high school in 1999. He was old for his class to begin with, but he also didnt earn college eligibility initially, forcing him to spend a year at a prep school prior to coming to Oklahoma.

Under former coach Kelvin Sampson, Longar couldnt earn more than eight minutes per game as a freshman and sophomore, but his playing time picked up substantially last season, and has carried over into this season as well. Hes shown noticeable improvement in his game, which was extremely raw entering college.

Longar is a decent athlete for a big man, showing pretty good mobility and coordination with nice ability to get up and down the court. He isnt very explosive, and is certainly not an elite athlete by any means, but he does boast very nice length for his size.

Longar has a decent groundwork of skills on the offensive end, but not what youd expect from someone who will be turning 25 in three months. In the post, Longar has decent footwork and a few moves in his arsenal, though he doesnt show exceptional awareness or many counter-moves. He also has not shown any ability with his left hand, and because of such, vastly prefers working on the right block and turning off his left shoulder, looking very uncomfortable when forced to go the other way. When he is in his comfort zone, though, Longar has shown a mini-hook shot, a drop-step move, a turnaround jumper, and a series of fakes to get past his man. Hes had varying success with these moves, but his footwork has been solid and he shows good coordination in getting the moves off.

Longar also has shown the groundwork of a jump shot, though he hasnt had much success with it from the video weve analyzed. He missed on six of seven jumpers from the 15-20 foot range from what we saw, and didnt have much more success in the 8-10 foot range, where he rushed a few contested jumpers. His shooting mechanics are nothing to rave about, as theyre not very refined, but he has a high and quick release, and its something he could possibly develop in time by working with a trainer or coach.

Longar gets a lot of his baskets by getting open near the hoop and finishing on uncontested jams, which he also has a pension for in transition. He doesnt show the same strong finishing ability when matched up with a defender, though, not possessing the strength to go through most defenders, even at the college level. Hes put on noticeable weight in his four years at college, but hes still not very thick, and since his shoulders are not that broad, its questionable how much more bulk he could add at his advanced age.

On the defensive end, Longar still looks very raw, not showing a great base of fundamentals, biting for fakes often, and looking uncomfortable when forced to move laterally on the perimeter. He also doesnt seem to have the greatest concept of leverage in the post, and gets pushed around by larger opposition fairly easily. He can block some shots with his length, but doesnt have the explosiveness to be a real force in that regard. On the boards, Longar gets his fair share by using his size, length, and decent athleticism, but hes inconsistent with boxing out, and can get pushed around by opponents bigger and stronger than he is. He only pulls down 6.5 rebounds per game, which is nothing exceptional for a 6-11 player coming off a fairly weak non-conference schedule.

Longars an interesting prospect, but its hard to project him in the draft due to his age and rawness. Some team could take a flyer on him in the second round and hope he still has a lot more learning curve in him, but many teams could be scared away by his age and his less-than-dominant performance in college against players 2-6 years his junior. In all likelihood, hell need to spend a year or two in Europe or the D-League continuing to develop his game to have a chance to make an impact in the NBA.
Read full article