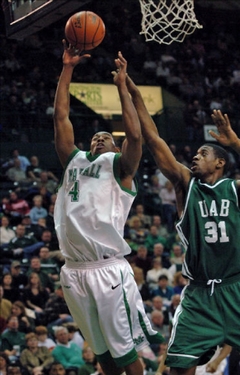 Joey Whelan
@DraftExpress
After an already-promising freshman year, Humphrey nearly doubled his scoring output in his sophomore campaign, finishing the year averaging 14 points per game. At 65 and 215 pounds, he possesses ideal size for an NBA shooting guard prospect. This season will prove to be crucial for Humphrey, who will be the primary scoring option for the Thundering Herd.

The junior fully utilizes his excellent athleticism on the offensive end, displaying an outstanding first step that he uses to get to the rim at every available opportunity. His strength and athleticism allow him to be an outstanding rebounder for a wing guard, posting an average 6.5 rebounds per game as a junior. Around the basket, Markels outstanding body and ability to jump most C-USA opponents allows him to convert at a high clip. With his ability to overpower players around the basket, it would be nice to see him post up a little more, however.

Humphrey is able to shoot the ball out to the NBA three point line, albeit inconsistently. He is a very streaky shooter, but does have the ability to get hot from beyond the arc. The lefty gets his shot off in a hurry with decent lift, but has inconsistent mechanics leave him with mixed results as a shooter. One area in terms of shooting the ball that Markel certainly needs improvement in his mid-range game, which is virtually non-existent. With the ball in his hands, he looks to either settle for a three point jumper or take the ball all the way to the cup, leaving him a bit predictable for opposing defenders.

Another facet of Markels game that must be improved upon if he hopes to solidify his chances of making the league is his ball-handling skills. He is very much a two dribble player, putting his head down and usually going straight to the rim, no matter who is in front of him. If Humphrey is able to improve his ability to create shots and score with better versatility, he has the potential to be a 20 point per game scorer in C-USA.

Defensively, Humphreys size makes him quite versatile. At times last season, we saw him guarding point guards all the way down to power forwards. Moving his feet well for a perimeter player, Markel does find himself out of place at times however. His tendency to gamble on the defensive end often leaves him out of place, resulting in him being a somewhat marginal defender on those occasions. With improved fundamentals and headier play on this end of the floor, Humphrey could very well wind up as a nice defensive player by the time it is all said and done.

With his size and athleticism, Humphrey finds himself as one of the top shooting guard prospects at the mid-major level. His junior campaign could be explosive for him in terms of his draft potential, as he will have the opportunity to show his stuff in front of plenty of NBA personnel during Marshalls matchups with national powers Memphis and Louisville. Most will play the wait and see game with Humphrey before gauging him as immediate NBA prospect, although he certainly has the potential to find himself in the league by the time it is all said and done.
Read full article