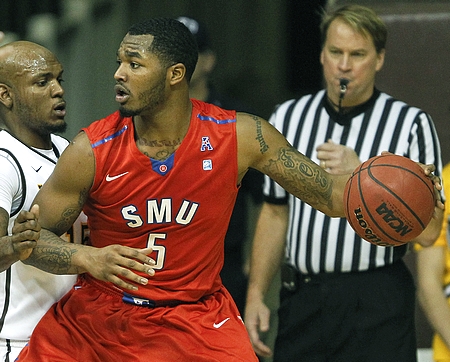 Markus Kennedy's basketball career has been somewhat of an odyssey thus far. After playing for five different high schools (one technically a prep school), he's now going into his third year of college basketball at his second school after transferring from Villanova to SMU.

Kennedy was worth the wait for Larry Brown and SMU, as he was named to the AAC's All-Conference second team after pumping in 20 points, 11 rebounds, 2.6 assists, 2.5 steals and 1.9 blocks per-40 minutes as a sophomore, and helped the team make the NIT Final Four after being surprisingly snubbed by the NCAA Tournament committee.

Kennedy weighed in at 268 pounds at the LeBron James Camp in 2009, but elected to transform his body during his redshirt year after leaving Villanova, now being listed at 245, and looking far better conditioned as well.

The focal point of SMU's offense in his 25 minutes of action per game, Kennedy saw the biggest share of his offense with his back to the basket, where he draws fouls prolifically thanks to his strong frame, but hits just 44% of his field goal attempts in these situations. Kennedy is somewhat of a throwback in his style of play, being decidedly below the rim, but using an array of shot-fakes, spins and fancy footwork to get his shot off with either hand. His strong frame allows him to establish deep post-position, and his soft hands make him a very reliable target for his guards to throw the ball to inside the post.

Kennedy is also a good passer, doing an excellent job of reading the floor and finding teammates from both the high and low post. He has a high basketball IQ and a solid understanding of the game, something head coach Larry Brown looked to utilize more and more as the season moved on.

Kennedy has a nice feel for scoring inside in general in terms of his instincts, body control and touch, even if his lack of athleticism makes it difficult for him to score over length at times around the basket, something that will likely become more of an issue in the NBA, where big men are far more gifted physically than in the AAC.

More of an undersized center than a true power forward, Kennedy rarely strays very far outside the paint for scoring opportunities, taking less than one jump-shot per game last season and hitting just 26% of his attempts. Considering the fact that he shot just 59% from the free throw line, Kennedy's jump-shot still has a long ways to go before it can be considered a major weapon, something he'll likely need in his arsenal to carve out a niche at the NBA level.

Defense is another area that Kennedy still has work to do to. He plays the 5 primarily for SMU, but is a few inches small for that spot from an NBA standpoint. He has good, but not great length to compensate for that, and as mentioned is not exceptionally athletic either. Bigger players are able to shoot over the top of him fairly easily, and he doesn't appear to have great lateral quickness stepping out to the perimeter. His intensity level leaves something to be desired as well, but to his credit, he does show terrific instincts and anticipation skills jumping into the passing lanes, where he comes up with an outstanding 2.5 steals per-40 minutes. No other college big men posted such a high steal rate last season besides Mitch McGary, who only played 197 minutes.

Kennedy's nose for the ball also translates to the work he puts in on the glass, where he posted a very solid 11.4 rebounds per-40 minutes, thanks to his strong frame, excellent hands and timing.

Kennedy is undoubtedly an extremely productive and effective college player, but it's difficult to project exactly what type of role he might play coming off the bench for an NBA team at this stage, as he doesn't fit into too many traditional molds. There's still time for him, though, as despite the fact that he's already 23 years old, he still has two years of college eligibility left. It will be interesting to see how many minutes he sees next season playing alongside 6-11 center Yanick Moreira, who is coming off a very strong showing in the FIBA World Cup after only playing 14 minutes per game last season. The two could form a very strong frontcourt if they show that they can play together effectively on both ends of the floor, something that would help Kennedy's prospects seeing reps at the power forward spot.
Read full article