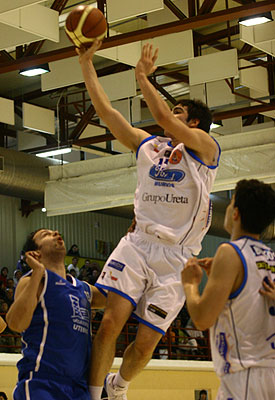 Matt Williams
@DraftExpress
After spending the past few seasons bouncing around the Spanish LEB, Matias Nocedal has landed in LegaDue with Aurora Basket Jesi on loan from Caja Laboral Baskonia. Having seemingly been on the radar of scouts forever, Nocedal has certainly made the rounds as a European prospect. The Argentinian point guard has played at the Nike Hoop Summit, the Adidas Eurocamp in Treviso, a host of junior championships, and has even seen a few minutes in the Euroleague.

Averaging 8.8 points per-game this season next to former Georgia Tech wing B.J. Elder, Nocedal has been extremely efficient shooting from the perimeter in spot-up situations and scoring off the bounce when going one-on-one, but hasn't been functioning as Jesi's primary ball-handler. He's spent the vast majority of his minutes at the two spot since he is better at using his creativity to score than pass, gets a bit out of control at times, and is simply looking to score first when he attacks. Nocedal has improved his shot considerably over the years, but still likes to put his head down and attack the rim with reckless abandon. Though his forays into the paint sometimes results in a savvy pass to a cutting big man, more often than not, Nocedal attempts to finish his drives himself with an array of scoops and floaters.

An extremely active defender, Nocedal is limited on both ends of the floor by his skinny frame, and while he shows very good quickness, he lacks the physical profile and explosiveness to effectively play the shooting guard spot at the NBA level making his lack of experience as a lead guard that much more significant. There's no doubting Nocedal's potential in the European game, and consistent minutes in Lega Due should be a nice stepping stone for him, but he has yet to emerge as the NBA caliber prospect some expected him to develop into earlier on in his career, and at this point, it's unlikely that he will.
Read full article

Mike Schmidt
@DraftExpress
Though he didn't play many minutes, Matias Nocedal displayed impressive tools as a point guard during his 13 minutes of play. Physically, the guard displayed impressive quickness and solid all-around athleticism, as well as a tight handle. The Argentinean has a nice feel for the game as well, displaying the ability to create for others on the pick and roll, as well as the vision to find the open shooting with the draw and kick.

As a scorer, Nocedal has somewhat unorthodox mechanics on his jumper, but shoots it with a very quick release and impressive accuracy. With the ball in his hands, he plays with a certain Argentinean flare, especially with the very flashy passes he shows the capability of making. Despite his quickness and physical tools, we really didn't see him finishing anything at the rim at all this week, and it would be nice to see him develop some type of mid-range game as well.

It will be quite interesting to watch Nocedal progress as a player with Tau Ceramica in Spain. It's tough to say how much of a prospect he is for the NBA at this point, as it seems way too early to draw any type of definitive conclusions. If he really continues to develop as a scorer and mature with his ability to run a team, he could turn into a very nice prospect down the road.
Read full article

Roundup: Tomic, Finesse on the Court

Luis Fernández
@DraftExpress
Currently sharing the floor with Nunes, Matias Nocedal arrived to Merida a few weeks ago. We had the chance to watch his debut in LEB Bronze, perhaps not the best situation to evaluate a player, but we wont likely have any other for the remainder of the season.

Logically, Nocedal often looked a bit out of place, still in the process of merging with his teammates. He played both guard positions, but apparently will primarily fill the point guard spot. Beyond his normal struggles given the fact that hes new to the team, Nocedal again exposed his current limitations as a playmaker. Hes not a consistent distributor and game director. He didnt create much offense for his team, and didnt always take good decisions. Hes a rather explosive player who can easily take his opponents off the dribble, but he would often find himself unsure about how to follow his slashing move, not finding his teammates fluidly, and sometimes running into dead-ends.

However, he did also left plenty of intrigue. Besides his ability to easily beat his match-ups relying on his athleticism and ball-handling, Nocedal looked good shooting from behind the arc, and showcased his remarkable off-the-dribble ability with his jumper, connecting on a wild mid-range attempt. He also showed his athleticism finishing a cut with a layup high off the glass and especially with an aggressive put-back dunk as he attacked the offensive glass storming in from the perimeter. He also looked good in transition, dishing a few excellent passes. Defensively, he had some troubles against the very quick American point guard he had to defend for some stretches, so he might need to work a bit on his lateral quickness.

Theres nothing much more to say. Only that he can really benefit from this stint in Merida, earning valuable experience that should allow him to mature as a point guard and settle his game down.
Read full article

Luis Fernández
@DraftExpress
Matias Nocedal has been relocated in the LEB-Bronce (Spanish fourth division), where he will end the current season. The Argentinean guard, whose rights are owned by Tau Vitoria, enjoyed very little playing opportunities in Bruesa, one of the strongest squads in the extremely competitive LEB-Oro (Spanish second division). Indeed he had played less than 60 minutes in 11 games, totaling 17 points. Still, he often didnt look bad at all coming off the bench as an energizer, but its true that he wasnt the most reliable presence on court for a team whose sole objective is to promote to the ACB. He will now enjoy more playing time, although against significantly inferior competition. Actually, he already made his debut with Merida this past weekend, spending over 27 minutes on the court to end up with 10 points, 3 rebounds, 2 assists and 2 steals.
Read full article

Luis Fernández
@DraftExpress
There's apparently quite a big void alter the current Argentinean generation that has been delighting basketball fans around the world for some years now. Nobody seems to enjoy truly great potential, nobody except this 16-year-old gem called Matias Nocedal. Signed through a very long contract with Tau Vitoria, he took part in the Division B of the U-20 Circuit playing with AutoCid Burgos, since the Basque club doesn't have a team of its own in this competition.

A skilled and rather athletic combo guard, Nocedal is a very talented player with an excellent feel for the game. At this point, he's still a pretty wild guy who needs to learn the ropes of the playmaking. He's not a pure point by any means, but he displays nice tools and certainly has time to improve. He comes up with excellent and creative passes from time to time, either off the drive or from the perimeter, showing good court vision, but he's not a consistent distributor.

Quite strong for his age, showing a good frame for a guard and nice wingspan, the Argentinean often falls in love with his ball-handling skills and ability to beat opponents off the dribble. He's a very solid ball-handler with his right hand, but rather suspect with his left. Still, he's pretty explosive for his age, quite effective with crossover dribbles and shows excellent footwork on slashing moves (for example, he likes to split both defenders on pick and roll traps), so for him it's pretty easy to get into the lane. However, he often forces too much and runs into dead-end streets. On a positive note, he's a tough guy who can play off contact and also finishes with both hands near the basket (better with the right), although he releases his layups a bit too low, therefore easier to block.

A rather intriguing part of his game is his ability to knock down jumpers at his young age. For a guy with his slashing abilities and physical gifts, it's refreshing to see that he doesn't only rely on them. Although he needs to gain some consistency from the arc, Nocedal displays nice form and is pretty consistent shooting off-the-dribble.

To sum up, Nocedal displays a nice array of skills to work with, while his biggest weaknesses are nothing that maturity and work shouldn't be able to fix up to certain extent.
Read full article