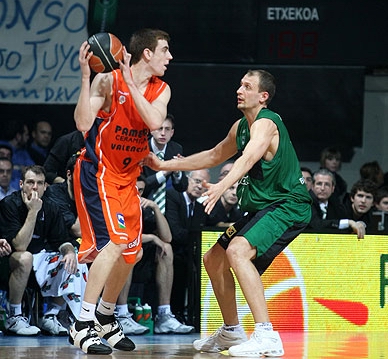 In a season full of up and downs, actually more frequent in the downs, Victor Claver just happened to deliver his best offensive effort this past weekend. His 24 points where crucial for Pamesa Valencia to erase a 16-point deficit they suffered late in the third quarter against Kalise Gran Canaria, becoming just the second team this season to come away from the Canary Islands with a victory under their belt.

Regardless of his inconsistency, coach Katsikaris has played Victor with some regularity, giving him chances to regain his confidence. The mental side of Clavers game is always important to stress: hes not the most self-confident player around, while his skill limitations hinder his ability to produce consistently.

Claver continues living off his ability to take advantage of the different opportunities that arise for him during the game, but he struggles to make things happen for himself. Playing as a full-time power forward this time (as hes been regularly doing in the past weeks), he didnt waste the looks he enjoyed on the perimeter, netting three of the four open spot-up treys he found. He was active moving without the ball, and his cuts towards the basket provided him easy layups, dunks and free-throws (he almost completed a spectacular reverse dunk by the baseline after being fouled).

2985[c]ACB.com[/c]
When it came to putting the ball on the floor, Claver basically only tried to do so with the defense unbalanced, always with good results for his team. Still, he needs to become more aggressive creating opportunities off the dribble. Perhaps his ball-handling skills are not the greatest around, but his first step is excellent, and especially when playing power forward, there shouldnt be any match-up capable of keeping up with him. He also could develop more of a mid-range game, as a resource to finish when the lane is too crowded (actually he showed something of this nature back in the junior category, but hardly anything with the veterans).

It wasnt only about scoring, as Victor delivered a few excellent passes, feeding the low post or some cutters, while he stayed very consistent on defense. Although matching-up against power forwards, he switched several times on smaller players, showcasing improved lateral quickness. Anyway, he was effective both in his man and team defense, showing great activity and a good sense for positioning. However, he also benefited from not having to face really big opponents, and indeed was almost never taken to the low post during the game.

It was a pretty complete game for him, but as exposed, theres still a long way to go for Victor in order to become a reliable player, to fulfill the star potential he enjoys. The draft doesnt look like a particularly appeal option for him at this point, perhaps not even next year (of course, always depending on his development).

A Look at Yong Xu

While we wait for the next big Chinese prospect to emerge, perhaps the most intriguing stuff coming from a youngster in the CBA this past season has been delivered by Xu Yong, an athletic wing who plays for Shanghai Sharks.

Not precisely a new name in the basketball world, Yong was selected MVP of the Adidas Asia Camp back in 2005, spending the following season in the States at the Bush School in Seattle. This past summer we could take a look at him at the U-19 World Championship, where he emerged as the most interesting player on a very weak Chinese team, while averaging 15.8 points, 3.8 rebounds and 2.1 assists. Back in China, he has been able to translate that nice summer effort to the CBA competition, going for 18.2 points, 6.3 rebounds and 3.4 assists throughout the regular season. He has even shown nice progression during the season, improving in the five-game span that closed the campaign for 25.2 points, 6.4 rebounds and 5 assists.

Yong has little competition in his country in terms of physical promise. Fluid and fairly quick, he easily gets off the floor showing good elevation that allows him to often play above the rim, quite a rare feat for a perimeter player in the Asian country. And not only is he athletic, but he also enjoys solid length for a wing player. There are controversial reports on his size, listing him up to 6-9. Hes not by any means that tall, most likely around 6-7, although he might very well stand a legit 6-8 in shoes. Rather skinny, his frame is noticeably better than your average Chinese player still.

Despite his offensive production, Yong still hasnt been able to emerge as a go-to player on the Shanghai Sharks (by the way, a below-average team in the CBA these days). Not the greatest ball-handler around, he struggles working with his left hand in traffic, while his right-hand can only be described as just decent. So its not common to see Yong attacking his opponents in one-on-one situations. When he does, he usually goes right, and still he struggles to get rid of his defender, mostly because hes not lighting quick off the dribble, and he barely shows any ability to change directions on the move to answer his match-ups reaction. Therefore hes not a player you can consistently trust to create offensive opportunities for the team.

Still, Yong stays pretty active on the floor looking for opportunities. Hes a fairly aggressive player who shows a certain tendency to visit the paint, either cutting from the perimeter, on slashing moves taking advantage of an unbalanced defense, trying to cash in off his superior size in the low post (although his hook shot seems to need a lot of work), or sometimes looking for good position to crash the offensive glass. Certainly the general softness of the CBA helps him in this regard.

A very average shooter, Yong still hasnt been able to develop a consistent jumper. He can knock down open spot-up treys, even off-the-dribble perimeter attempts if it doesnt mean having to change directions sharply, but hardly on a regular clip (he has failed to break the 30% mark this season). He shows nice elevation his shot, but his point of release looks inconsistent. He looks a bit better from mid-range distances, showing also better ability to connect on wilder attempts, sometimes a profitable solution for those drives when he cant get rid of his defender.

A nice open court player, Yong thrives in transition, exhibiting his solid quickness, while he loves to finish with powerful dunks, thanks to his excellent leaping ability. He loves to play above the rim, and not only is the dunk his favorite scoring option, but hes often pretty active on defensive rotations trying to block shots on the other end of the floor. To be more precise, Yongs team defense rotates between disinterest and flashy activity. This seems especially true with the Shanghai Sharks (with the National Team he looks more devoted to the cause), being more in tune with a CBA league where defensive rotations are not particularly emphasized. When it comes to one-on-one defense, hes not as effective as his tools should allow him to be, lacking aggressiveness on the ball, and perhaps better footwork to translate his athleticism into lateral quickness.

Were yet not especially sure about where his basketball IQ stands. It often looks like he could take better advantage of his tools, but anyway hes proving to be pretty effective in the CBA at his young age (supposedly born in 1989). Besides, he shows some signs of intriguing passing ability, with arguably the most common dishes coming off his driving attempts, often feeding continuations to his left while he attacks the basket with his right hand.

It doesnt get much more interesting anywhere else in the CBA, and yet Yong has a very long way to go. For starters, he will need to seriously work on his ball-handling skills, actually on his general off-the-dribble game, and his shooting ability. If he managed to become more consistent in those departments, as well as continued to fill out physically, he would likely become a serious NBA prospect.

Serge Ibaka delivered his best game of the season against one of the very top LEB teams, Alicante Costa Blanca, although his team eventually fell just four points short of the victory. Anyway, Ibaka had 27 points (including a three-pointer), 11 rebounds and 4 blocks (he leads the league with almost 3 rejections per game). Filling a complimentary role in LHospitalet, perhaps to the point of being underutilized, it hasnt been easy for Ibaka to come up with good scoring efforts. A couple of weeks ago he managed to score 19 points, so he might be in the middle of some kind of turning point.

Ante Tomic probably had a season-best game as well, leading his team Zagreb over Red Star with 20 points, 10 rebounds and 5 assists. Its interesting to note that Ante averages almost double digits in rebounding in the last five games. Indeed, he ranks second in the Adriatic League with 7.3 rebounds per game.

Vladimir Golubovic is the guy preceding Tomic in the rebounding ranks, leading the Balkan competition with 8.4 per game. His last effort came this past weekend as he led Vojvodina to the victory over Helios with 20 points, 11 rebounds and 2 blocks.
Mantas Kalnietis, while struggling to become useful for Zalgiris in the Euroleague, continues enjoying playing opportunities in the Baltic competitions. He took advantage of the last one, an easy victory against Aisciai-Atletas, to amass 13 points, 6 rebounds and 11 assists. Its needless to stress how difficult is to reach double digits in assists under FIBA rules.

Nicolas Batum has completely lost his scoring rhythm in the last weeks. He only credits a combined 22 points in the last 4 games, although he has continued playing meaningful minutes (24 per game in that span, just a few minutes under his average in the season) while his team is currently going through a six-game winning run.

Matias Nocedal has been relocated in the LEB-Bronce (Spanish fourth division), where he will end the current season. The Argentinean guard, whose rights are owned by Tau Vitoria, enjoyed very little playing opportunities in Bruesa, one of the strongest squads in the extremely competitive LEB-Oro (Spanish second division). Indeed he had played less than 60 minutes in 11 games, totaling 17 points. Still, he often didnt look bad at all coming off the bench as an energizer, but its true that he wasnt the most reliable presence on court for a team whose sole objective is to promote to the ACB. He will now enjoy more playing time, although against significantly inferior competition. Actually, he already made his debut with Merida this past weekend, spending over 27 minutes on the court to end up with 10 points, 3 rebounds, 2 assists and 2 steals.
Read Next...