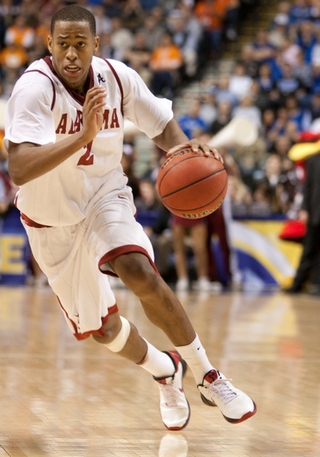 Matt Williams
@DraftExpress
Mikhail Torrance has remarkable size for a point guard, and he was more efficient last season that many more heralded prospects.

A 65 point guard, weve written a great deal about Torrance since his performance at the Portsmouth Invitational Tournament. He stacks up fairly well here his overall points per-possessions of .981 is good for fourth in this group, and is third amongst college players. He doesnt turn the ball over at a high rate either, coughing the ball up less than average on 16.2% of his possessions. However, his 15.3 possessions per-game render him as one of the lowest usage players on our list.

Torrance stands out the most in transition, where his size clearly helps him as a finisher. He scored 1.354 points per-possession in transition, ranking as the best fast break scorer in the group. Though only average in half court situations, Torrance is the third most effective isolation player in the group shooting 47.5% and has a lot of experience on the pick and roll, with 30.8% of his possessions coming such situations (3rd most).

Despite his size, Torrance isnt a great finisher (46.6% FG), nor is he going to make teams pay with his catch and shoot ability when left open (38.9%), but his form could allow him to improve as a shooter and if he develops his finishing ability with his right hand, he could become a very unique player at the next level given his size.
Read full article

Landry Fields: There Are No Direct Flights to Portsmouth

Landry Fields
@DraftExpress
My favorite player to watch, though, was Mikhail Torrance from Alabama. Its crazy, I couldnt figure out which hand was his dominate hand, and still dont know to be honest. It seemed like he made every pass with his left hand, but shot it with his right. He spent most of the time on the left hand side of floor and was able to finish with either hand. For some reason I have a fascination with guys who are ambidextrous.

Not to mention, for how big Torrance was, he has legit handle; no one was taking his ball away. There were a couple plays where he would get in the lane and explode up, but in mid-air would shift the ball around away from defenders hands and score easily. He reminded me of Russell Westbrook a little bit. His ability to score and break down his defenders was most exciting for me to watch.
Read full article

Jonathan Givony
@DraftExpress
Mikhail Torrance has fantastic size for a point guard, coming out at 6-4 without shoes with a near 6-7 wingspan. His measurements are nearly identical to Rodney Stuckey and are slightly superior to O.J. Mayo and Jrue Holiday.
Read full article

Joseph Treutlein
@DraftExpress
Perhaps the player with the best long-term upside of any prospect seen in Portsmouth, and clearly the one who made the biggest jump in draft stock comparing where he started and ended the camp, Mikhail Torrance had an excellent week any way you slice it.

Torrance has great physical tools for either guard position, standing 6-5, with a nice frame, long arms and excellent athleticism. He did a great job putting pressure on the defense all week long, getting to the basket time after time with his powerful long strides and showing terrific creativity running the pick and roll and finding the open man off the dribble. The fairly wide open nature of this setting benefited him greatly, as he looked very comfortable showing off his passing skills and terrific court vision and was able to make some very impressive plays in every game he played.

The aggressive slashing mentality Torrance showsrarely will he hesitate to take the ball to the basket with a full head of steamcombined with his size and quickness make him very intriguing prospect in todays NBA. He collected a large number of assists and got to the free throw line at a great rate, helping negate the fact that hes not a great finisher around the basket.

He dishes the ball in a variety of ways, be it with fancy bounce passes, creative lobs, bullets through the teeth of the defense, or simple, fundamental kickouts. A willing distributor, its fairly rare to see a converted wing player embrace the point guard position so thoroughly, as the talent he shows passing the ball is clearly innate.

Fairly turnover prone, Torrance coughs the ball up a lot more than youd hope, at times stretching the limit of his creativity and at times simply making unforced errors that hint at his inexperience running the position.

A very unorthodox player, Torrance drives left almost exclusively (77% of his drives go in this direction according to Synergy Sports Technology) despite the fact that hes right-handed. He looks highly uncomfortable finishing with his right hand around the basket, often switching awkwardly to his left even when the play doesnt call for it. With that said, he shoots jumpers and free throws with his right hand, and when asked which one he prefers, jokingly says that it depends on what day it is.

As a shooter, Torrance is improvable, particularly in catch and shoot situations, where hes not particularly consistent. He has excellent shooting mechanics, getting very nice elevation on his jump-shot and being able to create separation nicely from his defender in the mid-range area in particular, but can still improve his consistency, which would benefit him greatly. At his size, hell likely be asked to spend some time playing off the ball as well, so it would benefit him to show that he can be relied upon as a spot-up threat.

Defensively, Torrance has excellent potential thanks to his size, length and lateral quickness, but his average fundamentals render him not as effective as he could be in this area. He often looks too upright in his stance and gets beat off the dribble more than youd like, swiping at the ball and gambling in the passing lanes more than youd like him to. Better coaching and more experience could make him an excellent defender in time if hes willing to put his mind to it, and considering his likely role-player status, could be the difference between being a rotation player and not sticking in the NBA at all.

All in all, Torrance is an intriguing prospect that came out of this camp with quite a bit of buzz thanks to his excellent performance. He went through quite a bit of turmoil in his four years at Alabama, with coaching changes, a rotating door of players and especially point guards coming in and out of the program, and very little to show for it in terms of his win-loss record in turn. With that said, players with his size, athleticism and versatility can add a lot of versatility to an NBA teams backcourt, especially those with undersized combo guard types at the 2, and while hes clearly not a finished product, he seems to have a good amount of potential to continue to improve down the road.
Read full article

Standing out from the opening tip due to the sheer size (6-5) he brings to the table at the point guard position, Torrance showed terrific physical tools and potential and likely established himself as a legitimate draft prospect in the process.

With his excellent first step and aggressive slashing mentality, Torrance got into the lane all game long against the much smaller Devan Downey, both in transition and off the pick and roll. Wisely looking more concerned with showing off his playmaking ability in order to prove his mettle as a point guard prospect (for which hes far more interesting for the NBA than at the 2) than scoring, Torrance made some extremely creative passes all game long, both with flashy bounce passes off the pick and roll and with drive and dish plays finding open teammates right underneath the rim.

While Torrances conversion to the point guard position is clearly not a finished processas evidenced by the 7 turnovers he committedhe showed enough potential in this area to show that hes more than just another 2-guard masquerading at the 1. Hes a willing distributor with solid court vision and nice creativity, even if he needs to do a better job of cutting down on unforced errors and possibly taking as many risks.

While Torrance played an excellent first game, there are still a couple of areas we want to continue to study over the course of the next two games. One would be his defense, an area that he clearly has potential in thanks to his size and athleticism, but seems to struggle in at times to his seemingly average fundamentals. Another is his shooting stroke, which looked a bit streaky in this game.

While obviously not a finished product, Torrance is exactly the type of prospect an NBA team might be willing to spend time and energy developing because of the benefits they could reap down the road. Torrances ability to defend either guard position could give a coach a lot more versatility to play alongside a smaller combo guard without great playmaking skills. Torrances SEC counterpart Garrett Temple could be a good example to look at. Even if Torrance doesnt make the NBA on the first go-around, hes someone teams might want to continue to keep tabs on to see how he progresses down the road.
Read full article