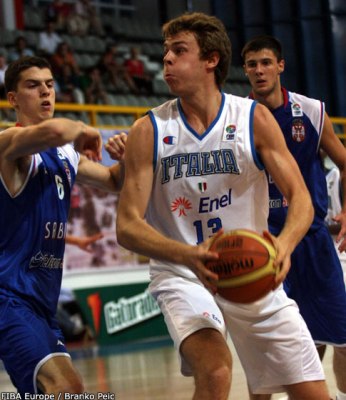 Matt Williams
@DraftExpress
Last time we checked in on Nicolo Melli, he was fresh off a solid, but unspectacular showing at the adidas Nations Experience back in the fall of 2008. He spent last season with Trenkwalder Reggio Emilia in Lega Due, getting off to a slow start, but picking up his play in December before suffering a season-ending shoulder injury. Melli has taken a big step forward this season, leaving the comforts of his hometown behind to compete at the highest levels of European basketball with Armani Jeans Milano, but struggling with his recently-added weight while adjusting to his new, much more demanding surroundings.

Averaging right around 10 minutes per game both in Euroleague and Serie A competition, Melli has received consistent minutes off the bench as a jack of all trades, master of none power forward for a Milan team that is off to a fast start in Serie A, despite a number of injuries. Though he has struggled to score at times and isn't explosive or overly mobilesomething that is even more noticeable now that he's bulked up as much as he has--he has some intriguing skills for a player his size, appears to have a great feel for the game, and does a great job anticipating angles as a rebounder. While he is certainly stuck in between the forward positions at this point as a prospect, Melli still has time to define his role, reshape his body to reach his full athletic potential, and become a more finished product.

The promising Italian forward does a bit of everything offensively in limited touches for Milan, but hasn't had the opportunity to handle the ball and make plays for his teammates with his heady passing like he did last season with Trenkwalder. Operating exclusively off the ball and primarily out on the perimeter as something of a stretch-four, Melli has also seen some possessions working the middle of zone defenses in the high-post and with his back to the basket down low. Displaying a pretty impressive skill level for a 19 year old, Melli is capable of putting the ball on the floor and getting to the rim with straight-line drives,, but will need to time improve his overall polish and consistency and seems to be in the process of adjusting to the more athletic defenders he's facing in the Euroleague.

Still lacking aggressiveness, a degree of toughness and possessing underwhelming explosiveness, which limits his ability to finish around the rim, Melli is still shaking the dust off of his perimeter shot after his shoulder injury, and tweaks to his mechanics have rendered him largely ineffective from perimeter. He has also turned the ball over at an extremely high rate in limited minutes, regularly getting called for traveling and struggling to deal with physical defenders when he puts the ball on the floor two tendencies he could certainly overcome in time. His combined 35% shooting and extremely high turnover rate are pretty disconcerting, but his versatility certainly catches your eye when you watch him on film nonetheless.

Melli is still in the process of making the transition from LegaDue to the highest level of European basketball--something that will surely take some time-- and it will be important for him to continue seeing playing time to help him acclimate to his new body-type and role. If he can overcome some of his mental mistakes, improve his physical tools, and become more consistent from the perimeter, he could garner some looks in the second round of the draft when he decides to test the NBA waters. Right now his current contract has no exit clause for this coming summer, meaning we're likely talking about a prospect for the 2012 or 2013 draft at the earliest.
Read full article

Jonathan Givony
@DraftExpress
After a somewhat disappointing performance at the Reebok Eurocamp in Treviso (going up against players far older than him we must point out), it was good to be able to see Melli compete against players in his own age group (or in this case, sometimes a year older).

The results were somewhat mixed, as Melli started off the camp very slow, but got better as it went on, showing some intriguing tools, but also quite a bit of room for improvement as is expected considering his tender age of 17.

Melli is a versatile player, capable of (and very much enjoying apparently) grabbing a rebounding and bringing the ball up-court himself. He is a good ball-handler and a solid passer, also showing a nice stroke from outside, and some very basic ability to play with his back to the basket in the post. He is pretty skilled for his size (6-9) and shows a good frame too. Athletically he is good, but definitely not great, and his touch and all-around feel for the game leave a lot of room for optimism regarding his future development.

With that said, there are definitely some concerns to share as well. Melli often looks extremely tentative on the court, going through long stretches of unproductiveness, playing very passive, even soft to a certain extent, looking afraid to throw his body around and put himself in harms way. This is exactly where the wide-spread comparisons with Danilo Gallinari appear to come up short. Hes a very average finisher around the basket, struggling badly in particular if asked to finish through contact, and is an even worse defendershowing concerning lateral quickness that raises serious question marks about his ability to guard the perimeter down the road. Melli is definitely stuck between the 3 and the 4 at the moment, showing the size and the frame of a PF, but the skill-set and mentality of a SFbut not enough aggressiveness or athleticism to guard either spot effectively.

Melli will continue to play for his hometown club of Reggio Emilia in the Italian second division--Lega Duethis season. Teams like Tau Vitoria and Armani Jeans Milano (amongst many others) have been linked with his signature this summer, but it appears that hell spend one more season getting playing time at a fairly solid level of competition.
Read full article

Luis Fernández
@DraftExpress
Much like happened with Jodar, Nicolo Melli wasn't too much of an offensive reference for Italy. Actually, both have similarities in the sense that they are forwards placed at the four position in this category. Still, Melli looks a little bit more naturally skilled playing off the dribble. He showed the ability to put the ball on the floor with both hands, although he probably lacked aggressiveness attacking the rim and he's not the most explosive guy around to get by his opponents. Instead, his mid-range jumper looks pretty consistent, which still can't be said of his long-range stroke.
Read full article

Jonathan Givony
@DraftExpress
Also present here was 1991 born Italian Nicolo Melli, who had quite a bit of hype coming into this camp after an excellent final game in the playoffs of Lega Due (16 points and 15 rebounds). Unfortunately for him, he barely managed to show anything going up against players mostly 4-5 years older than him, looking very tentative and even apologetic on one occasion when he accidently knocked a player to the ground. He put the ball on the floor a few times with either hand, knocked down a 3-pointer in the final game, but for the most part tried to stay out of peoples way, not really seeing a great deal of playing time, but not exactly showing much to prove that he deserves more when he did step on the court.

Melli has a mature frame, and good size at 6-9 if he ever will be able to make the transition to the small forward position, but he didnt show a great deal of athleticism or incredible upside to perhaps backup the strong reputation the preceded him. Then again, hes only 17 years old, so clearly, time is on his side.
Read full article