DraftExpress
@DraftExpress
Serbian power forward Nikola Jankovic has been built like a pro since we first wrote about him in 2010. An absolute bully at the junior level, who has averaged 16.1 points and 6.2 rebounds per game this season in the Belgian League for Pepinster, the 94-born prospect has parlayed his rugged interior scoring ability into a fair amount of success at the international level already. Scoring 16 points on 12 shots and even knocking down a 3 today, Jankovic is one of the more mature players in attendance here, and it showed on the floor. Not known for his shooting ability early in his career, Jankovic's ability to knock down perimeter shots is a point of interest as the development of his scoring arsenal away from the rim appears to be ongoing. Though his upside is limited from a NBA perspective by his lack of explosiveness, this was a strong showing for one of the more productive young players at the domestic league level in Europe. Opting not to declare for the 2015 NBA Draft, Jankovic will be automatically eligible next season and should receive some interest even if he isn't among the top long-term prospects in his age group.
Read full article

Jonathan Givony
@DraftExpress
-For Serbia, Nikola Jankovic grabbed an impressive 14 rebounds, though many of them came on the offensive glass on his own misses. He converted just 3/13 two-point attempts, many of them chipees around the rim due to his average explosiveness finishing in traffic. The rest of the team was very balanced with a good amount of talent. We'll talk more about them as the camp moves on.
Read full article

Jonathan Givony
@DraftExpress
Arguably the top prospect seen in Paris (despite being two years younger than most of the competition), there is little doubt that Nikola Jankovic has an extremely bright future ahead of him. 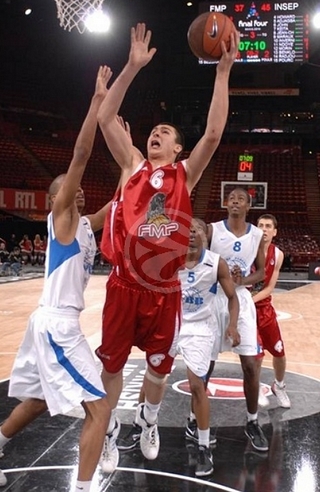 Listed at 6-7 (but possibly an inch taller), Jankovic is a physically mature 16-year-old with an outstanding feel for the game. He's an extremely smooth, fluid athlete, and while he's not incredibly explosive, he possesses more than adequate physical tools to reach his high ceiling.

Jankovic is a very skilled player for his age. He looks comfortable handling the ball in the open floor, but is at his best when creating shots for himself in the post. His amazing hands allow him to catch virtually anything thrown his way, which, combined with his nimble feet, his wherewithal around the basket and his unusually patient demeanor with the ball, make him simply a load to deal with at this level. Jankovic can finish with either hand around the rim and shows excellent touch on top of that. He's capable of playing above the rim but can finish plays in other ways as well.

Offensive rebounding is where Jankovic excels. He has an excellent knack for coming up with loose balls--as he has great timing and terrific quickness pursuing extra possessions--and he's extremely quick going back up for easy baskets. His excellent hands again show up in a major way here. He averaged about 7.5 offensive rebounds per 40 minutes in nine NIJT games, which is a simply phenomenal rate.

Another area where Jankovic shines is passing. He finds teammates from both the low and high post--showing a basketball IQ that is far beyond that of your typical 16-year-old.

Jankovic's on-court demeanor is encouraging. He appears to possess excellent leadership skills. He was often seen taking responsibility and encouraging his teammates in huddles despite being two years younger than most of them. By all appearances, he is a highly unselfish, competitive young player--which is a great sign.

A couple of areas that Jankovic can improve are perimeter shooting, free throw shooting and defense. He has plenty of time to work on these things, considering his age.

The challenge for Jankovic now will be to continue to work on his game and not get complacent, because he's more physically mature than other players his age and can probably get away with simply relying on his strength advantage. If he keeps getting better over the next few years, he could develop into quite a prospect down the road. Watching him play, it's hard not to think about how similar he looks to Kevin Love when we saw him at the same age.
Read full article