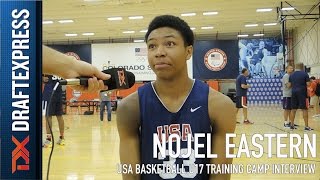 Mike Schmitz
@Mike_Schmitz
Coming off a nasty left ankle injury in late April, Nojel Eastern (#36 Scout, NR ESPN, #41 Rivals, #67 24/7) was only in Colorado Springs to rehab, but was a constant presence in basketball, sliding around on his Ron Hunter style scooter trying to shoot one-handed jumpers. His measurements showed that he's continued to grow in the past seven months, as he's now up to 6-4 in shoes, with a 6-7 wingspan, an 8-5 standing reach and weighs 192 pounds.
Read full article