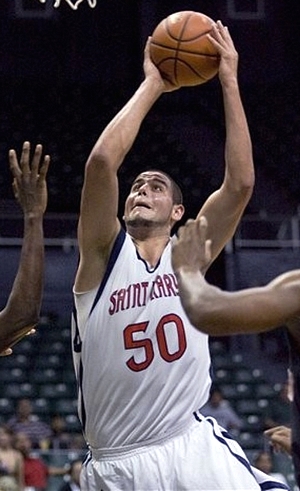 Last time we checked in on Omar Samhan, he was fresh off a double-double against Hasheem Thabeet. At that juncture in late 2006, both players were freshman. Three seasons of steady development later, we find the senior center emerging as one of the top mid-major conference big men in college basketball. With Patty Mills and Diamon Simpson moving on, Samhan has assumed his role as the Gaels first option and has thrived thus far ranking amongst the most efficient players in our database this season.

From a draft perspective, Samhan is intriguing because of his blend of size and feel for scoring in the post, but isnt a prototypical athlete by NBA standards. Though the 50-pounds hes lost from when he arrived at St. Marys have helped his speed considerably, Samhan lacks the explosiveness that would make him a surefire draft pick. Standing 611 with a nice frame, Samhan has worked tirelessly to improve his conditioning and is reaping the benefits, but will fall under scrutiny for his ability to translate his game to the next level.

Few players at the college level boast Samhans combination of touch and post instincts. Capable of operating over both shoulders in the post, Samhan gets almost 60% of his offensive possessions in the post according to the data at our disposal. Receiving the ball on the left block on the majority of his possessions, Samhans knack for putting points on the board stems from the way he takes what the defense gives him. Prone to putting the ball on the floor almost every time he receives the ball in the post, Samhan does an excellent job surveying the floor and then shielding his man from the ball from the mid-to-low post two things that get him to get to the line at a very solid rate.

Once Samhan picks up his initial dribble, he shows tremendous fluidity in his post repertoire, stringing drop-steps and step-throughs together seamlessly. Not blessed with great quickness, the senior plays with pace and is extremely decisive when he makes a move. Very discerning when deciding whether to use his hook shot or jump shot when going right, Samhan is a tough guard due to his ability to knock down short jumpers. He may lack tremendous hangtime, but his ability to turn into the lane and fade away often gives him the space he needs to take advantage of his defender before help arrives.

The deft touch Samhan shows on the block doesnt translate to his midrange game just yet, but hes able to make an impact when hes not isolated on the block by being active without the ball. Presenting a big target and displaying excellent hands, Samhan proves to be a solid finisher, but struggles to play above the rim a trait that wont help his stock. His size and hands allow him to make an impact on the offense glass as well, where he frequently uses his ability to gain position to rebound his own misses.

Defensively, most of Samhans value revolves around his ability to pull down rebounds at a high rate. Doing a better job recently stepping out and contesting perimeter shots, Samhan is an active defender, but his poor lateral quickness makes him a liability when defending cutters or offensive players with developed face up games. Able to block shots from time to time thanks to his length and solid timing, Samhan will go straight up when his man makes a move to the rim, but would likely struggle to make the same impact in this area on the NBA level.

A talented senior who has improved in each of his collegiate seasons, Samhans work ethic is clear in his gradual weight loss. Though hes played extremely well this season, hell need to continue proving his mettle, and would benefit considerably from a strong NCAA tournament considering the lack of quality big men hell find in the WCC conference outside of Gonzaga. The 25-point, 18-rebound outing he posted against Andrew Ogilvy and Vanderbilt was a step in the right direction, but beyond that the schedule looks pretty flimsy as far as big-time matchups are concerned.

It will be important for Samhan to show well the rest of the season, especially against Gonzaga, but ultimately, hes a perfect candidate for the Portsmouth Invitational Tournament. If he can hold his own against some of the more athletic seniors hell encounter in this class, hell give himself an opportunity to earn a spot in the second round on the workout circuit considering the premium NBA decision-makers place on size.
Read full article

Mike Schmidt
@DraftExpress
Where many other elite freshmen have already showcased their abilities in big time non-conference matchups, Jim Calhoun has essentially protected his young group with a laughably easy non-conference schedule. Sunday was no different, as the Huskies rolled over St. Mary's. However, 7'3 freshman C Hasheem Thabeet actually had his hands full with a legit big man in 6'11, 265 pound freshman Omar Samhan - a solid prospect in his own right.

Even though the outcome was never in doubt after the opening minutes, this individual matchup stayed interesting the entire game. Thabeet and Samhan are almost polar opposites in terms of development, with Samhan displaying outstanding skill and feel for how to score in the post, but still having to work very hard to produce against the unfathomable length of the very raw Thabeet. Where Thabeet is nothing short of an natural athletic freak for his size, Samhan had to work very hard to lose weight and get into the passable shape he is in today.

The Gaels looked for Samhan early and often, attempting to get Thabeet into foul trouble. Samhan was generally more active and physical, able to react to plays much more quickly than Thabeet, and forcing Calhoun to pull the plug on the freshman early in the first half. Samhan showed great footwork, solid touch around the rim, and an excellent activity level for such a young big man. Even with Thabeet on his back and the rest of the Connecticut defense collapsing around him, Samhan found ways to produce.
Read full article