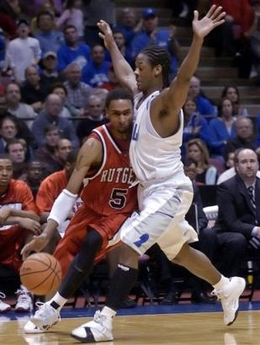 Jonathan Givony
@DraftExpress
A former first round pick with 143 NBA games underneath his belt in three seasons, Quincy Douby wasted absolutely no time finding his latest job in Turkey once he was released by the Toronto Raptors in mid-November. He surprisingly signed with tiny Darussafaka (a sister team of Efes Pilsen) just a few days later, and has been plying his trade for the worst team in that league (record: 0-12) ever since, predictably putting up huge scoring numbers along the way. Douby is averaging almost 24 points per game, tops in the league by a wide margin, to go along with 4.6 assists. Hes getting to the line over 8 times per game and converting 37% of his 3-pointers, none of which is a surprise considering the reputation Turkish league defenses have around Europe.

Douby is showing off his entire offensive repertoire, be it his terrific perimeter shot, his ability to get to the basket with either hand, or his outstanding mid-range game. He has phenomenal touch on his floaters and pull-ups and is extremely natural at creating shots for himself with his shifty change of pace dribbles. On the downside, he isnt much of a point guard despite standing just 6-3 and suffers from extremely poor shot-selection at times. The main thing likely holding him back from playing in the NBA is probably his lackadaisical demeanor on the defensive end, something that is just as evident in the Turkish league in his do-it-all offensive role, and isnt likely to change in the situation hes currently in.

Douby is easily the type of player who could earn himself another NBA paycheck with a string of excellent summer league games (something hes done before) or even single workout where he shows off his immense offensive skill-level. Until he becomes a better defender, though, he probably isnt much more than a marginal NBA player, which is something he may need to work on playing on a big team in Europe that competes outside of their domestic league as well.
Read full article

Mike Schmidt
@DraftExpress
Douby was just tremendous yet again today. Hes really showcasing his quickness and creativity, finding all kinds of different routes to the rim. He over-penetrates at times, leading to turnovers, but hes a risk taker and thats always going to be a problem for him considering the way he plays. His jump shot was lights out today, and hes a great catch and shoot player from college three point range. Unfortunately, his range is somewhat limited and hes still developing his consistency. Perhaps the most impressive aspect of Doubys performance today was his defense. He showed unreal anticipation, accumulating numerous steals due to his length and vision. His hands are very quick, and while he has a slight frame, hes capable of attacking the rim and getting to the line. Doubys been one of the most impressive players in attendance and while he doesnt have a position due to his lack of playmaking ability, hes a nice option off the bench in Sacramento.
Read full article

Matt Williams
@DraftExpress
Douby had a good outing today, showing the ability to put points on the board in a hurry. He got extremely hot from the perimeter, knocking down shot after shot in the second half. Despite the strong showing, Douby hasnt answered questions about his ability to transfer those skills to the NBA level. He lacks the quickness to beat his man of the dribble and has too slight a frame to bully his way to the rim. Sporting a big t-shirt today, it is clear that Douby has not gained much weight since his time at Rutgers. Those two things work against him when he goes against physically superior defenders. His inability to run the point was apparent today, and he just isnt comfortable bringing the ball up the floor and initiating the offense. He doesnt do a great job setting up his teammates or protecting the ball. Douby showed some nice things defensively today, using his length to block some shots and get his hands on some bad passes.
Read full article

Mike Schmidt
@DraftExpress
Joining us for the 2nd time in the past month is one of the hottest names in the NCAA as of late, Rutgers combo guard Quincy Douby.

Douby went on the road and shattered the record for points scored in the Carrier Dome by putting up a career high 41 points in 43 minutes. His team came heartbreakingly close to knocking off Syracuse, but a miracle three-pointer by Terrence Roberts in overtime at the buzzer eventually saw them leave with a narrow 2 point defeat. Quincy Douby was as good as anybody I've ever seen in here since this building's been open," Syracuse head coach Jim Boeheim said. "We were pushing up on him, man-to-man and zone, trying to do anything we could to get him to just miss a little bit."

Douby was nothing short of amazing down the stretch, knocking down three-pointer after three-pointer from deep range despite Syracuses intense defense and doing a great job of mixing up his scoring with his passing and defense, something that wasnt always the case in his three year career at Rutgers so far. His shot selection was much better than usual, and we are seeing less and less of the immaturity and me-first attitude that has made us so hesitant to call him a legit top notch prospect despite being the best scorer in easily the best conference in America. Douby has now scored in double figures in every single game this year and has reached 20 points or more in 15 of his last 19 games. Rutgers looks like an extreme longshot to make the NCAA tournament at this point, but people are starting to notice just how good of a player Douby is and how impressive it is to see him accomplish what he is despite the double teams and the competition level he is going up against.

Were talking about one of the better athletes the Big East has to offer. Not only does he have excellent quickness and an explosive first step, he also changes gears like a true pro, doing a great job keeping his defender off-balance, going left or right and always making you wonder which direction he is going to contort his body in next. Doubys excellent footwork helps him out tremendously in this area, making him one of the best shot creating guards in the entire country if hes being defended straight up. His ball-handling shows a lot of potential, one of the areas he has made the biggest strides in over the past year. Douby doesnt just have the potential to be a great slasher, though, he is one already, being more than willing to take the ball strong to the hoop and finish amongst the trees even with plenty of contact.

Thats not where his offensive game ends, as Douby is also one of the best 3-point shooters in the Big East despite the attention he draws from opposing teams. He shoots nearly 40% from behind the 3-point arc, and can score both off the dribble with a hand in his face or off the catch and shoot showing a lightning quick release.

If his extremely polished offensive game isnt quite enough to convince you that he is a legit draft prospect, the work he does on the other end of the ball probably should. Douby is an able and willing defender who has no problem getting low in an aggressive defensive stance and getting right in his mans chest. He has quick hands and comes up with a good amount of steals thanks to his quickness and length.

After reading all this you might wonder why Douby isnt placed firmly in the top-20 of our 2006 mock draft. And while its possible that he ends up there, there are just too many glaring weaknesses to his game that are almost impossible to ignore. First would be his position in the NBA. At 6-3, he will probably need to play at least a little bit of point guard, but when he played that position last year, the results were disastrous for his team, winning just 3 games in the entire Big East slate. He is clearly much more comfortable coming off the ball and focusing on his scoring. His negative assist to turnover ratio this year does not exactly dispute that. Second would be some baggage that has been a constant distraction both on and off the court. According to most accounts, Douby has too many people around him who arent exactly looking out for his best interests. His basketball IQ looks questionable at times, and some NBA types already wonder just how coachable he is. His body language can be extremely poor at times, clapping incessantly at his teammates when they have the nerve to refuse to pass him the ball and clear out the floor, killing the ball-movement of his team and overdribbling, getting frustrated easily and generally showing a poor attitude. Third would be his teams record, sitting at just 3-6 in the Big East and being dangerously close to missing the conference tournament if his team doesnt pick up some big wins in the next few weeks. There is no doubt that he is capable of putting up huge numbers on a fairly bad team, but can he do it without dominating the ball with more talented teammates around him?

With that said, there is a place in the NBA for a player in Doubys mold. He is your classic off the bench energy type to come on the floor and erupt for points while providing solid defense for his teams 2nd unit. His trash-talking NYC swagger will find its fans in NBA circle, and hes shown a better maturity level as the season moves on. His feel for the game is good despite only playing organized basketball for the last 5-6 years, being able to find the open man when he wants and showing a lot of passion and fire to his game. Even though he is saying all the right things right now (and everyone always does at this point in the year), I dont think anyone would be surprised to see his name on the early-entry list come May.
Read full article