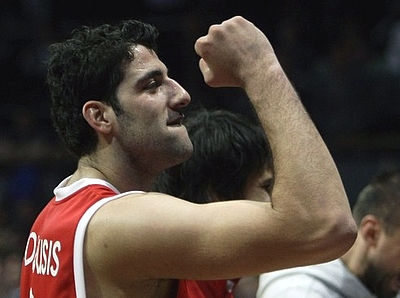 Bouroussis topped our list last year, and will continue to do so for the foreseeable future. Hes clearly the cream of the crop amongst European big men, and is young enough to still think that he may not yet have reached his peak as a player when considering his late blooming background. Bouroussis reportedly had a number of NBA offers on the table this past summer, most notably from the San Antonio Spurs, but decided that he was not yet ready to make the leap over and instead inked a lucrative 3-year, 5 million Euro contract extension with Olympiacos instead. He left the window open with a comfortable NBA buyout and quotes stating as much, meaning hes still very much a name that NBA teams need to continue to evaluate as a potential big-time roster addition for the future. Seeing the amazing success that Marc Gasol is having this season in Memphis, and comparing their resumes, its not a stretch to say that Bouroussis could be a very productive NBA player in his own right.

Mozgov was covered in depth in an article two weeks ago, which can be found here.

Langford was covered in depth in an article two weeks ago, which can be found here.

Drafted in 2008 by the Golden State Warriors late in the second round after a pre-draft physical uncovered potential red flags in his knee, Richard Hendrix was unceremoniously dumped by Don Nelson when he found out that he shockingly is not a fit for his system in the least bit. Hendrix seemed to have made out just fine from the deal, pocketing a cool half a million dollars in guaranteed cash for under a month of service. He proceeded to join the D-League, where he looked somewhat disinterested at times, but still found a way to average nearly 15 rebounds per-40 minutes pace adjusted, good for second in the league. He then played extremely well in two separate summer leagues (Orlando and Vegas) as a member of the Magic and Nuggets rosters, but when no NBA team came calling with guaranteed cash, opted to sign in the Spanish ACB with CB Granada.

The move seems to be paying off quite well for Hendrix, as hes already established himself as one of the more productive big men in the leagueaveraging nearly 20 and 10 per-40 minutes pace adjusteddespite being a 23-year old rookie in the toughest domestic league in Europe. If anything, hes upped his value significantly in Europe by showing that he can translate his game over to a new style of play, and hes surely improved in his own right along the way.

What Hendrix brings to the table is quite obvious for those who have seen him or followed him throughout the years on this site. Hes a brute force underneath the basket with his terrific body, huge hands and 7-3 wingspan. Hes not a terribly skilled offensive player but is regardless fairly effective around the paint, particularly with his back to the basket. His main virtues lie in his rebounding ability, as he boxes out opponents extremely well and does an excellent job pursuing loose balls with his soft hands and long arms. He is yet to develop much of a face-up game and still a liability from the free throw line, two things he must address as his career moves on, but is a highly efficient player (leading the ACB in field goal percentage) who understands his limitations and comes off as quite an intelligent and fundamentally sound player.

Defensively, Hendrix is an undersized center who is effective guarding the post thanks to his strength, smarts and tenacity, but loses effectiveness the more he steps away from the basket. In todays NBA, though, where players like David Lee and Chuck Hayes are thriving at the center position that might not be as much of an issue as it was in years past, despite the fact that Hendrix cant be described as anything more than an average athlete at best.

As the Kurt Thomas and Reggie Evans of the world slowly get phased out in favor of younger big men, its only natural for teams to look in the direction of players like Hendrix to fill their void in their respective rotations. Considering the way hes produced at every stage of his career thus far, its not out of the question that he could surprise someone and develop into a valuable asset.

After spending the entire 2008/2009 NBA season with the Cleveland Cavaliers, averaging just under 6 minutes per game in 50 contests, Tarence Kinsey decided to head back to Turkey where he found a lot of success in 07/08 with Fenerbahce Ulker once he was cut by the Cavs in training camp. With over 100 NBA games under his belt (at 12 minutes per) he obviously wont need any time to transition into a new role, and still has the upside of being a 25-year old wing with size and athleticism who had eight 20-point games in the span of one month while playing for the Memphis Grizzlies as a rookie in 06/07.

Defensively, Kinsey has an average wingspan and is not particularly strong, but regardless finds ways to be effective thanks to his athleticism and the effort he usually brings to the table. He gets in the passing lanes at a nice rate and can put solid pressure on the ball, but tends to lose focus at times and not play with great consistency, a problem that can be reflected on both ends of the court. Regardless, Kinsey is still only 25 and may not have reached his peak at this point, particularly if he can find a way to put more bulk on his frame.

Nachbar was covered as part of the following article.

McIntyre was covered as part of the following article.

Gordon was covered in depth in an article two weeks ago, which can be found here.

Anderson was covered in depth in an article two weeks ago, which can be found here.

Sato was covered in depth in an article two weeks ago, which can be found here.

At the tender age of 31, Pete Mickael may be having the best year of his career, as he finally appears to have broken into the elite category of American players in Europe, and is having an absolute stellar season in the Euroleague in particular. Mickeal is a well-built, athletic and ultra tough small forward who operates as a sort of Paul Pierce of European basketball. He can take his man down to the block and convert shots with great efficiency, but hes also skilled enough to face up from the perimeter and take his man off the dribble and get to the free throw line. Moreover, hes finally become a consistent 3-point shooter, at least to the point that he needs to be respected from beyond the arc. He offers quite a bit with his defense and excellent rebounding as well, and has really blossomed into a versatile team player who is willing to do all the little things to help his team come away with a win.

Normally Pete Mickael wouldnt show up on a list of this nature, hes after all, already 31 years old and thus one of just two players (along with Terrell McIntyre) over 30 amongst our top 50 overseas free agent prospects. Mickeal is a bit different than your average American player, though, as he seems to have peaked a bit later on his career than most and was still expressing NBA sentiments this past summer in his
Hoopshype blog.

Its not out of the question that Mickeal could draw interest in free agency from a playoff team looking to add a tough, experienced veteran to bolster their rotation, and considering his status as one of the top small forwards in European basketball, coupled with his NBA friendly profile, he could emerge as quite a valuable asset.

A former first round pick with 143 NBA games underneath his belt in three seasons, Quincy Douby wasted absolutely no time finding his latest job in Turkey once he was released by the Toronto Raptors in mid-November. He surprisingly signed with tiny Darussafaka (a sister team of Efes Pilsen) just a few days later, and has been plying his trade for the worst team in that league (record: 0-12) ever since, predictably putting up huge scoring numbers along the way. Douby is averaging almost 24 points per game, tops in the league by a wide margin, to go along with 4.6 assists. Hes getting to the line over 8 times per game and converting 37% of his 3-pointers, none of which is a surprise considering the reputation Turkish league defenses have around Europe.

Douby is showing off his entire offensive repertoire, be it his terrific perimeter shot, his ability to get to the basket with either hand, or his outstanding mid-range game. He has phenomenal touch on his floaters and pull-ups and is extremely natural at creating shots for himself with his shifty change of pace dribbles. On the downside, he isnt much of a point guard despite standing just 6-3 and suffers from extremely poor shot-selection at times. The main thing likely holding him back from playing in the NBA is probably his lackadaisical demeanor on the defensive end, something that is just as evident in the Turkish league in his do-it-all offensive role, and isnt likely to change in the situation hes currently in.

Douby is easily the type of player who could earn himself another NBA paycheck with a string of excellent summer league games (something hes done before) or even single workout where he shows off his immense offensive skill-level. Until he becomes a better defender, though, he probably isnt much more than a marginal NBA player, which is something he may need to work on playing on a big team in Europe that competes outside of their domestic league as well.
Read Next...