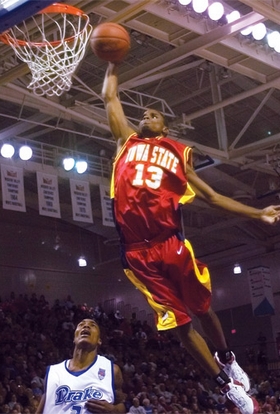 Jonathan Watters
@DraftExpress
Rahshon Clark possesses a lot of tools that help his NBA potential. He is incredibly athletic, and explodes off the ground very quickly. In addition to his freakish athleticism, he has a well developed body. Unlike a lot of college players, Clark knows how to use his body, and controls himself very well near the basket which gives him the chance to finish while drawing contact. Offensively, Clark is a good spot up shooter. He shot 37% from the three point line last season, following his 40% mark as a freshman, albeit on a limited number of attempts. In addition to his shooting, he finishes very well inside when he receives the ball in the right position. Clark can finish from anywhere inside of 12 feet, and has a very nice feel for how to use the glass inside. In addition, he has very good rebounding skills. A lot of players rely solely on athleticism to get rebounds, but Clark knows how to use his body and time his jump.

There are a few main weaknesses limiting Rahshon Clarks NBA potential at this point in time. He has the size to play the small forward position in the NBA, but he lacks the ball handling ability. When he scores, its either off of a set shot, or a teammate getting him the ball in the right position. This lack of ability to create anything off the dribble will have to improve drastically if Clark is going to make it in the NBA. A lot of the time when youre watching him, he leaves you thinking that youre watching a power forward in a small forwards body. Though he has a good shooting stroke, Clark is sometimes streaky. In addition, he doesnt have great lift on his jumper, which allows it to be disrupted at times. Clark sometimes gets lost in the flow of the offense, and floats around on the perimeter waiting for the ball. This hurts floor spacing, and causes break downs in the offense. Clarks lack of feel for the offense also hurts his passing ability, and he sometimes takes far too long to make decisions.

This season, Rahshon Clark will have every opportunity to break out and be the man at Iowa State. Will Blalock and Curtis Stinson have moved on, and big man Shawn Taggert transferred. First year coach Greg McDermott has also suspended Michael Taylor, so Clark will be expected to be the main scoring option. Right now Rahshon Clark projects as a second round pick at best, but he could vastly help his draft stock by developing some ball handling skills, and a better feel for the game. He is intriguing because of his shooting and athleticism alone, but at this point it is hard to project him to a position at the next level. A breakout year is definitely within the realm of possibility considering the circumstances he is playing under, so it will be interesting to see how his game develops during the 2006-2007 season.
Read full article