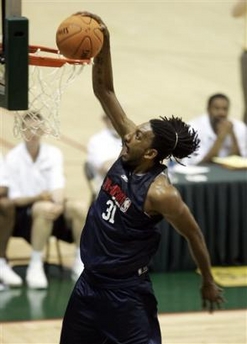 Matt Williams
@DraftExpress
Overview: Undersized power forward whose hustle, defense, and scrappy play offensively allows him to effectively fill both forward positions. On the short side, only measuring in a shade over 6-5 without shoes, but boasts a 7-1 wingspan. Not the strongest player around either, but is a solid athlete and plays with an energy that helps him compensate for his size. Not a highly recruited player after attending a number of different high profile basketball academies, took time to mature and grow into the player he is now. Was a rather unheralded prospect coming out of South Carolina too, using back to back NIT titles and a NIT Most Valuable Player Award to earn a surprise selection in the first round. Was tabbed by then Knicks decision-maker Isaiah Thomas after his performances in Madison Square Garden and the Orlando Pre-Draft Camp. Has proven to be the type of defensive-minded roleplayer that he was billed as coming out of college. Rebounds the ball well and has become an efficient scorer, despite his lack of ideal jump shooting ability. Appears to understand his role and fill the defensive specialist role pretty well. Needs to take a page from Trevor Ariza and Mickael Pietrus and improve his shooting and polish some other aspects of his game to diversify what he brings to the table.

Offense: Functions almost exclusively as a hustle player. Able to add some value with his relentless pursuit of the ball. Gets about half of his offense off of cuts to the basket and offensive rebounds, with another quarter coming in transition. Not asked to create essentially any offense for himself. Doesnt possess much in the way of perimeter scoring ability due to a lack of catch and shoot ability, a highly unreliable pull up jumper, and mediocre ball handling ability. Displays adequate form, though he needs to get more elevation on his jumper and develop better touch to expand his range. Lack of touch shows in his poor free throw percentage. Effort level wont come into question. Constant motion and ability to get out in transition allows him to earn himself some open shots right at the rim. Competent finisher who is the beneficiary of a lot of good passes. Doesnt have to deal with a lot of contact when he is looking to score at the basket, allowing him to be relatively efficient. Not an ideal option in half court sets due to his lack of polish, but doesnt turn the ball over at a high rate. Strictly a fifth option almost any time hes on the floor at this juncture.

Defense: Good defensive player whose hustle helps him make a much bigger impact on that end. Uses his length to effectively contest shots out on the perimeter, doing a decent job getting a hand in his mans face when he can rotate to the shooter fast enough. Has some weaknesses that detract from his ability to be a good team defender. Tends to watch the ball when defending the weakside, leading to some open jumpers when hes late getting back to his man. Often sells out to try and block the shot when closing out the perimeter, forcing his teammates to play 4 on 5 for the rebound. Has even more trouble with screens, getting taken out of the play too easily. Does not show great intensity or urgency with the way he moves defensively, but is considerably more aggressive and focused when his man looks to take him off the dribble. Shows good lateral quickness and appears to take a lot of pride when defending one-on-one. Wont back down from a challenge, being very aggressive in isolation situations, but knowing that he isnt big enough to defend back to the basket players and giving smart fouls. Long enough to block some shots, pull down some rebounds, and force some turnovers. Needs to improve his team defense to be a more complete defender.
Read full article

Eric Weiss
@DraftExpress
Balkman had a very strong camp, jumping into the draft picture and possibly propelling himself into this years second round. If he chooses to remain in the draft, he will definitely have a chance at making an NBA roster, even if its through summer league.

Balkman, at 66 ½ with a long 71 wingspan and a wiry build, projects to be a small forward in the NBA. Here at the camp, he made most of his contributions by simply out-hustling the competition with his athleticism and quickness. His greatest contribution was on the glass, both offensive and defensive, where hed frequently come from nowhere to grab a rebound or score a putback. Thats where Balkman got most of his scores, as hes a pretty raw player on the perimeter, where he isnt very accurate with his jump-shot. He did show some nice flashes of a slashing game and some ball-handling in the fullcourt, though. He also threw out a few nice passes in both the half and fullcourt. Defensively, Balkman did a solid job at the camp, but with his physical tools, he has the potential to develop into a very good defender at the swingman positions.

Balkmans game is not much unlike current NBA player Trevor Arizas. They have the same knack for rebounding, the same long and athletic physical attributes, the same energy on the floor, and the same raw perimeter game. Ariza is a better ball-handler than Balkman, and has recently developed a larger semblance of a mid-range jumper, but otherwise, Balkman could play a very similar role for an NBA team that Ariza does, providing energy in the passing lanes and on the break while contributing some slashing and rebounding offensively.
Read full article

Balkman had a surprisingly effective showing, using his combination of athleticism and hard work to track down loose balls and rebounds relentlessly while also finishing a lot of shots around the basket. Balkman is about 6'6, long, athletic, and provides a constant energy on the floor. He was most impressive today attacking the glass, where he'd frequently grab rebounds away from opponents much larger and stronger than he is. In terms of the NBA, his game appears to best translate to a small forward, where he would serve a type of garbage player role, as he is not particularly skilled at any one thing. He hasn't shown much proficiency with outside shooting, though he did have quite a few nice passes today and handled the ball fairly well. He also has a good touch around the basket and finished a lot of baskets both in the halfcourt and transition today.
Read full article