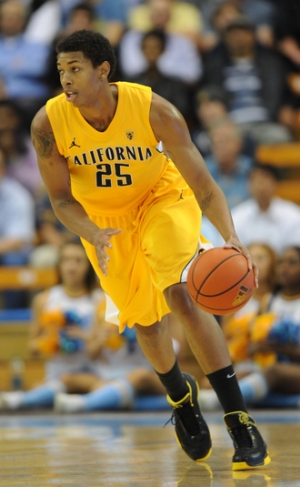 Just missing out on making the USA U19 National Team this summer, Richard Solomon returns to Cal looking to build on a solid, albeit largely developmental, freshman season.

Standing 6'10 with a massive wingspan and an extremely lanky frame that he'll absolutely need to continue to add weight to down the road, Solomon is a good athlete with nice size for a power forward from a NBA perspective. While he lacks truly elite explosiveness, he's mobile, fairly smooth, and finishes plays easily above the rim by virtue of his length. While the young forward still has a lot of work to do to round out his physical profile, he shows a few interesting tools for a young player in his mold.

Perhaps the most significant of those tools is his solid worth ethic on both ends of the floor. By no means is Solomon a go-to threat or a terribly polished offensive player at this juncture, but he makes the most of his size and length by sitting in gaps in the defense and capitalizing on the opportunities his teammates create for him. He seldom sees the ball with his back to the basket and is still getting acclimated to the physicality of the college game, but began playing within himself more and more as the season went on, made an effort to crash the glass, and ran the floor hard in transition.

Away from the basket, Solomon attempted a handful of three-pointers, showing a foundation for development as a spot-up threat, but has a long way to go to be a reliable shooter from distance and from the foul line. When defenders gave him the chance, the Los Angeles native did show the ability to make straight-line drives to the rim, but across the board is still in the early stages of his development on the offensive end.

Defensively, Solomon's length allows him to make an impact and overcome some of his mistakes, but he'll have to get stronger and improve his fundamentals to become a more capable one-on-one defender. His lack of bulk is his biggest weakness at the moment, as it hurts his ability to maintain position when defending the post and when boxing out. When he's defending off the ball, the Los Angeles native has some nice moments blocking shots from the weakside and attacking the passing lanes, but is clearly still getting used to sitting in the back of Cal's zone.

Considering his age, now is not the time to make any long-term conclusions on what Solomon's future holds, but he has some fairly clear things to work on moving forward, namely his offensive polish and frame. If he improves those things, he's going to see significantly more playing time, at which point we'll revisit his standing as a prospect.
Read full article