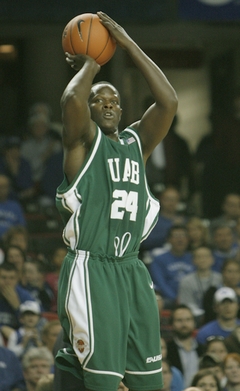 Jonathan Givony
@DraftExpress
Robert Vaden finished off the camp with another fairly solid performance, scoring 11 points in 21 minutes to go along with 3 assists and no turnovers. Hes really impressed with his ability to move off the ball, read screens and find open shots for himself, elevating sharply and creating separation from his defender and throwing the ball in the basket with machine like efficiency, despite his violent leg kicks. Hes really strong and has clearly worked on his body since the season ended, and did a much better job playing within the offense and setting up teammates than he did earlier in this camp. On the negative side, hes not the most athletic or creative player youll find in terms of his ball-handling skills, favoring his right hand strongly and struggling to finish that at times around the rim. It appears that hell be returning to school, and it will be interesting to see what kind of year he has next season.
Read full article

Joey Whelan
@DraftExpress
After two solid seasons at Indiana under Mike Davis, Robert Vaden chose to follow his coach to UAB after his resignation, forcing him to sit out last season due to transfer eligibility rules. Vaden reportedly worked hard during his season on the bench, which has paid off, as he has led his team to a 22-9 record, while averaging 21.8 points per game and earning First Team Conference USA honors. Vaden had made some slight adjustments to his game by becoming the clear-cut #1 option for the Blazers, which has resulted in less assists and less rebounds, along with a lot more attempts from behind the arc, to the tune of 11.9 three-point attempts per 40 minutes pace adjusted, tops in our entire database. Even though Vaden lost some weight prior to the season, he still has a strong build for 65, though hes a below average athlete by NBA standards.

Looking at Vadens game, it becomes apparent quite quickly how reliant his game is on the three-point shot. 327 of his 488 field goal attempts (67%) came from behind the arc, and he actually shot slightly higher on three-point attempts than two-point attempts (.422 vs. .416). His shot has good form, with a high, consistent, and fairly quick release, which he can get off in a lot of different ways. Hes clearly at his best when spotting up in space, but he doesnt alter his shot when contested. He can also come off screens, catch-and-shoot on the move in transition, or pull up off one dribble following a shot fake. He does a good job getting his feet set in tight spaces to get his shot off when contested, but can show questionable judgment against more athletic defenders, sometimes forcing the issue, leading to blocked shots. He also will make some questionable decisions pulling up when he doesnt have good body control, but for the most part doesnt take many bad shot attempts, and hes capable of hitting some of the high difficulty ones he does try.

With 13.8 of his 21.8 points per game coming on three-point shots, the rest of Vadens scoring game really isnt much to talk about. Hell occasionally hit some spot-up shots from mid-to-long range, hell occasionally pull up off one or two dribbles coming off a shot fake inside the arc, and hell occasionally finish on some off-ball cuts, but he really doesnt have the ability to consistently attack the basket, not having the tightest of handles. He can take the ball to the basket in space, but struggles splitting double teams and doesnt show many advanced ball-handling moves, while most of his turnovers come from mishandling the ball or having trouble trying to penetrate the defense. Even when he does get to the rim, he doesnt show the best finishing ability, as hes not the greatest athlete, often throwing up right-handed floaters that arent highly accurate. To Vadens credit, he seems to recognize his limitations well and usually doesnt stray far from them, as evidenced by his ridiculously high number of three-point attempts per game.

Vaden does show nice court vision and passing ability, showing good sense to find the open man either on the perimeter, cutting to the basket, or in transition. He averages 2.5 assists per game, and averaged 3.5 as a sophomore at Indiana when he was less relied on as a scorer, while most of his turnovers come from ball-handling, not errant passes.

On the defensive end, Vaden shows good attentiveness and hustle, sticking with his man off the ball and playing good team defense, though his man-to-man defense is lacking at times, as he shows questionable lateral quickness and when his man is close to turning the corner, he usually will try to gamble for a steal rather than continuing to shift his feet. With his good hands and timing, this works some of the time, but it also leads to blow-bys.

Itd be in Vadens best interest to return to UAB for his senior season, where he could continue to develop as a player, most notably by trying to improve his ball-handling and ability to attack the basket, to become a more complete player. Hell need to become more than just a great shooter to have a likely chance at the NBA, though he should be a very productive player overseas if he doesnt make it there.
Read full article