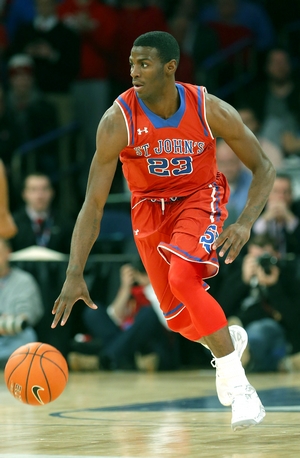 The highest rated recruit (#31 RSCI) Steve Lavin has reeled in during his tenure at St John's thus far, Rysheed Jordan lived up to his billing somewhat inconsistently in his first season of college, being suspended for a few days in the midst of a rocky start early on, but nevertheless rebounding and making the Big East's All-Freshman team.

Offensively, Jordan was neither a prolific (14.5 points per-40) or efficient (49.7% TS%) scoring threat as a freshman. The biggest share of his offense came in transition according to Synergy Sports Technology, as his size and athleticism make him an excellent threat to push the ball ahead in the open floor, but he isn't overly effective once there, shooting just 47% from the field in these situations.

Jordan is able to create his own shot and get inside the paint in both the half and full court fairly effectively, as he has a long, strong and quick first step driving in both directions, but he doesn't always know what to do once there. His touch around the basket is average at best, and his inability to finish with his left hand is something opposes defenses are aware of and like to game-plan for.

Jordan's ball-handling ability hasn't caught up yet with his physical tools, as he only plays at one speed and relies too much on his strength to overpower defenders and get into the lane. He coughs the ball up at a high rate-- his 19% turnover percentage ranked fifth worst among all Top-100 college prospects-- as he's prone to making lazy, careless passes in traffic and can be fairly wild with the ball in his hands.

As a facilitator, Jordan is a mixed bag at this stage. He can create for teammates in drive and dish situations, and will generate some assists by way of making the extra pass unselfishly within the flow of the offense, but doesn't show brilliant court vision and is prone to over-dribbling. His feel for operating on the pick and roll is just average due to his inability to play at different speeds and lack of creativity.

Jordan's jump-shot is another area he will need to improve on. He was very inconsistent as a freshman, hitting just 28% of his 3-pointers and 66% of his free throws. Jordan's shot doesn't appear to be broke, his mechanics in catch and shoot situations are actually decent, and he had a few games last season where he made multiple outside jumpers, he just doesn't have very good shot-selection and settles for too many extremely difficult looks. He creates nice separation from his defender on his jump-shot, but sees very inconsistent results because he shoots it differently virtually on every attempt.

Defensively, Jordan shows very intriguing potential, and this might be the area that gets and/or keeps him in the NBA if he really decides to focus and perfect this part of his game. He has tremendous tools here, with his superior size, length, and frame, coupled with his ability to move his feet and put strong pressure on the ball. Jordan can guard multiple positions (up to three at the college level), which gives him very nice versatility, and he gets in the passing lanes at a high rate, averaging nearly 2 steals per-40 minutes adjusted.

Like many young players, Jordan wasn't terribly consistent on this end of the floor as a freshman. He loses his focus easily, gets lost off the ball too frequently, and doesn't always play with the same intensity levelnot fighting through screens, gambling excessively for steals, and closing out lazily on the perimeter.

While fairly inefficient and inconsistent, Jordan showed some very intriguing flashes of potential as a freshman. Now moving into his sophomore year, NBA teams will want to evaluate how much of his struggles early on were due to a lack of experience and how much were due to things he can and will improve on. Already 20, Jordan is a little older than some of his peers in the sophomore class, but will be a prospect scouts will watch closely to see how his skill-level and basketball IQ are developing.
Read full article