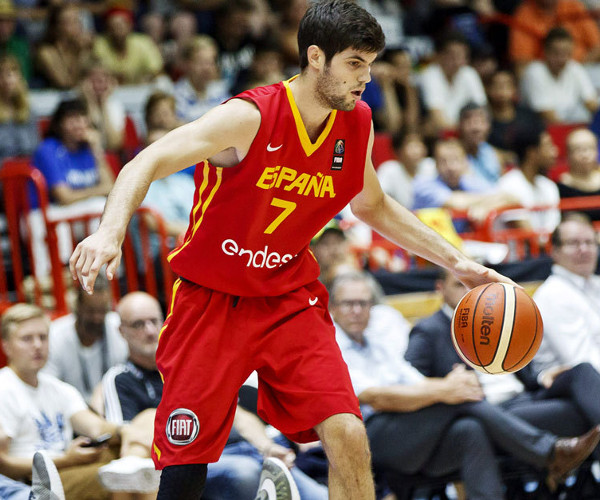 Mike Schmitz
@Mike_Schmitz
Among the top performers on the final day of games was ACB prospect Santiago Yusta. Playing steady minutes with Obradoiro this season averaging 5 points and 2 rebounds per game coming off the bench, Yusta is known for his flashy passing, defensive instincts, toughness, and craftiness off the dribble, but made perimeter shots at a strong rate today, a nice change of pace from his struggles during the regular season. His release appears to have improved a bit, and coupled with his slashing ability, make him a player to watch next season. Lacking the most polished decision-making ability attacking the rim on the move, Yusta could raise his profile considerably if he can become a more consistent decision maker and a reliable threat from beyond the arc given his size, athleticism, and instincts. He has some interesting tools to build off long term, and the experience he's garnered seeing steady playing time in the ACB the past two years make him someone to track next season.
Read full article

Outlook: Signed a three year contract with mid-level ACB team Obradoiro, which should give him more opportunity to find minutes at the senior level than he would have staying in Real Madrid. Shows potential in different parts of the game, and has been very productive in other settings, particularly the Euroleague ANGT, where Real Madrid won the championship.
Read full article

Matt Williams
@DraftExpress
-Santiago Yusta, was, according to members of his camp, a late addition to the roster, but he's awaiting authorization from Real Madrid to attend as he's a member of their first team, having already appeared in a number of ACB games this season. Yusta is a physical and versatile 6'7 swingman who proves fairly creative off the dribble and can make an outside shot, albeit sometimes inconsistently.
Read full article