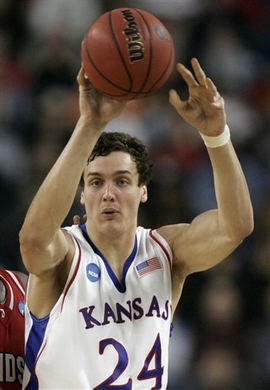 Joey Whelan
@DraftExpress
An experienced big man who never developed quite the way some people expected after his excellent sophomore season, Kaun entered the NCAA Tournament as somewhat of a forgotten guy on a team loaded with prospects. Despite featuring great size, excellent hands and a good feel for the game in the low post, Kaun posted similar numbers in his senior year as he did two years ago as a sophomore. Against Davidson, the Kansas senior was perfect from the field and showed some good tools that will certainly place him on the radar of NBA scouts during the Final Four and going into the heart of the draft process over the next couple months.

Offensively, the senior showed the ability to score with both hands against Davidson, a trait that has aided him in shooting 62% from the field this season. As a player who was only once comfortable with his right hand, it was impressive to see him spin to his right shoulder on his first three scoring attempts. He still lacks any type of game away from the basket, but showed decent agility throughout the game, specifically on an alley-oop dunk in the second halfa set play that Kansas runs somewhat regularly for him. Kaun failed to make the subsequent free throw attempt to complete the three point play, however, and has only converted on 54.1% of his charity stripes attempts this season.

Defensively, the Kansas senior has no fear in banging in the post, and shows good potential as a man to man defender. He rotates well on the weak side as well, and seems to have the proper understanding of how to defend and recover on the pick and roll. Though he moves well in the paint and rotates properly, Kaun doesnt really stand out as a shot-blocker at this point in time, as hes not quite that explosive to establish himself here.

Right now, the senior is held back offensively by his limitations outside of the paint. He shows good comfort and patience in the low-post, but appears lost with the ball on the perimeter. Kaun cant hit a mid-range jumper even when left open, and his passing ability out of the high post leaves a lot to be desired. Rebounding will also be another area of focus for Kaun. He positions himself well under the basket most of the time, but has poor timing and instincts, and sometimes struggles to hold onto the ball. Foul trouble has also plagued the big man at times this season, and might be part of the reason he only played around 18 minutes per game this season (though the incredibly stacked Kansas front court probably has a lot to do with this as well).

Though its rare to talk about a senior with 7 point and 4 rebound per game averages as a potential draft prospect, Sasha Kaun has the tools that could make him an NBA player. It will probably help his cause that he has experience as a role player next to a top level big man at the college level. Kaun will most certainly gain an invite to the Portsmouth Invitational and pre-draft camp in Orlando, and his package of size and scoring ability could allow him to really emerge in that type of setting. Even if his name isnt called on draft night, he will be given every chance to make a team as a free agent next fall. If he doesnt make it, no one should shed any tears for him, as he will quickly be able to work himself into a 7-figure salary back in his native country of Russia, where local rules make domestic players of his size and quality an invaluable asset.
Read full article

Joseph Treutlein
@DraftExpress
At 611 and 245 pounds, Sasha Kaun has a good build for a potential NBA center. Kaun also brings good length and a decent level of athleticism and fluidity to the table. Entering his junior season, which will only be his sixth year playing organized basketball, Kaun has a lot of intrigue to his game. As of now, Kaun is strictly a post scorer with no semblance of an outside game, but he had an effective and encouraging sophomore season at Kansas. Expected to return as the teams starting center, many will look for Kaun to expand on his currently narrow but effective game.

Kaun has a pretty reliable post game, though its lacking much versatility at this stage in his development. About 90% of the time when he has his back to the basket, Kaun will turn across his left shoulder for a soft hook shot with his right hand. Kaun has also shown the ability to use this move to fake his man, getting him up into the air, and then switching the ball to his left hand while stepping through the defender to go up with a left-handed lay-up. This is something he very rarely will do, but its something he should definitely work on to add versatility to his post game. Kaun also has shown the ability to use a left-handed hook shot, though his touch with his left hand is not up to par with his right. Its obvious that Kauns post game is still developing, but its encouraging to see flashes of a multitude of different moves, all of which hes been able to use with at least some effectiveness.

Kaun fights hard for position in the post and is very active in calling for the ball. He does a good job to seal out his man when on the inside, and has good enough hands that he rarely will bumble a pass. Kauns footwork is something he could use some work on, as he can look uncomfortable when he goes out of the comfort zone of his basic go-to move, the right-handed hook shot. When faced with multiple defenders, Kaun doesnt show much grace with his feet in trying to create a shot opportunity, occasionally stumbling or losing his balance. Kaun does have very good recognition of where he is on the court, though, also understanding how and when to use the glass with either hand. Kaun is not an athletic freak by any means, but he has enough athleticism for his post game to get by should he reach the next level. At 611 with good length, Kaun doesnt have many problems getting his shot off. He also shows a good level of fluidity at this stage of his development, even in spite of his currently non-advanced footwork.

Kaun is also a pretty good offensive rebounder, exhibiting the same motor as his post game in his relentless to establish position. Kaun does a good job at getting inside position, then being able to effectively seal off his man. Even when he doesnt initially have the inside position, he can slip around the defender to get the inside track, then using his length to either tip the ball or pull down the rebound.

As mentioned earlier, Kaun doesnt have any semblance of a perimeter game. He has not displayed any kind of jump shot, even from 5-10 feet, and also has no face-up game to speak of. He doesnt play from the perimeter, and hasnt shown an ability to play from the high post either. The only time Kaun does step out of the painted area is to set picks. Kaun also has not shown much proficiency passing the ball, not doing much in terms of hitting cutters or making a kick-out for a perimeter shot. Kaun isnt turnover prone either, though, as hell pass the ball out and let the play reset if he doesnt have anything down low.

Defensively, Kaun is an adequate man-to-man defender in the post, generally being able to stay in front of his man and contest any shots while not fouling too much. Hes also strong enough that hes generally not overpowered at this level of play. Kaun is a pretty attentive player on defense and makes most of the necessary rotations. He doesnt do much in terms of blocking or altering shots, though, as he lacks explosiveness from the weakside. Kaun hasnt shown much in terms of man-to-man defense on the perimeter, though his lateral quickness would definitely be a question mark. He does however show enough mobility to be able to hedge the ball-handler on pick-and-rolls, and still be able to recover to his own man. In terms of rebounding the ball, Kaun is adequate there as well, for the most part maintaining good position and boxing out his man.

Kaun had a very strong start to the previous season, putting up some very impressive statlines early in the year, though his play tailed off as the season wore on. Scouts will be looking for more consistent production from the junior big man, but that will be tough given Kansas abundance of talent at the other four positions on the floor. Still, if hes been working hard in the offseason, he should come back with a more diversified post game and hopefully at the very least a semblance of a 5-10 foot jumper. In an era where serviceable big men are becoming more and more scarce at the professional level, Kaun has a very nice foundation to build upon with his physical attributes and reliable post game.
Read full article

Landry Fields
@DraftExpress
Sasha Kaun's sophomore season has been an up and down one, though it is hard to ignore a player as physically imposing as him. He came back for his sophomore year with a new muscular build, instantly catapulting him onto 2007 mock drafts. Kaun's game is still a work in progress, as he doesn't have the most advanced offensive skill at the moment. He finishes strong at the rim, but still looks somewhat awkward when attempting a back to the basket move. Kaun is also still learning how to use his body to his advantage, and will have to up his level of aggressiveness on a consistent basis. Just like the rest of the Jayhawk prospects, a big March could mean big things for Sasha Kaun down the road.
Read full article

Landry Fields
@DraftExpress
Kaun came into the season as somewhat of a question mark, after a freshman season at Kansas in which he played a minor role. With Wayne Simien graduated, that has changed. Kaun began the season with a 25 point, 16 rebound explosion at Idaho State, and continued to exhibit an intriguing package of skill and size at the Maui Invitational.

Kaun isn't the most polished big man you will see in the NCAA this season, but he is blessed with a 6'11, 245 pound and impressively chiseled frame. Unlike your stereotypical European big, Kaun spends nearly all of his time on the low blocks. His post game is certainly still a work in progress, but he is having better luck scoring with his back to the basket this season. This was evident in his 12 point, 6 rebound outing against Arizona, where his numbers certainly would have been better had the Jayhawk ball-handlers been even somewhat capable of breaking the Wildcat press. Where last season one may have been able to classify Kaun in the "lumbering" big man mold, he looks significantly more mobile this year. He doesn't appear to be overly athletic, but shows off some serious explosiveness when he gets close enough to the basket to dunk. Kaun is only going to get better as he learns how to utilize his NBA-level body. Sasha Kaun may still be a year or two away, he is showing early this season that the NBA is likely in his future.
Read full article