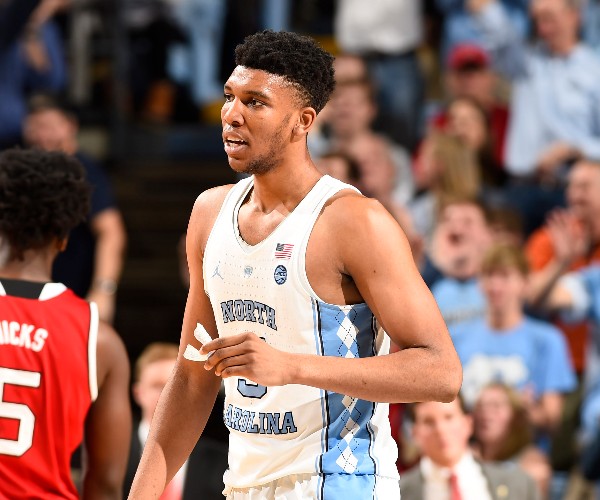 Ryan Thomson
@rthomson9
A top-30 recruit from Bartow, Florida, Tar Heels freshman big man Tony Bradley was able to carve out a niche for the eventual NCAA Champions as an energetic rebounder and opportunistic finisher, and decided to ride that momentum into the 2017 NBA Draft, opting to sign with an agent after initially testing the waters.

Bradley only played 14 minutes per game behind a group of experienced big men in upperclassmen Kennedy Meeks and Isaiah Hicks, but was able to show enough flashes throughout the course of his freshman season to be considered a potential first round pick, holding averages of 19 points, 13.9 rebounds 1.6 blocks per 40 minutes on a 59.1% true shooting percentage.

Bradley certainly looks the part of an NBA center with tremendous size and length, measuring 6'10.75 with a 7'5 wingspan and a 9'4.5 standing reach at the NBA combine in Chicago. Bradley's length helps partially negate the fact that he is an underwhelming athlete, posting the worst standing vertical leap among all centers who took part in the combine at only 24.5 inches, while also noticeably lacking much in the way of quickness and playing below the rim in-game. Bradley has a solid frame, and is fairly mobile for his size, but needs to continue to maintain his conditioning, as he weighed 249 pounds with 12% body fat and has the body type that could thicken up quickly if he's not careful.

The majority of Bradley's offense as a freshman came around the rim, both on drop-offs and put-backs, his most translatable NBA skill at this stage. Bradley's greatest strength throughout the season was his non-stop motor. He played limited minutes, but his per-40 minute production was exceptional, particularly on the offensive glass at 6.9 per 40, which is the best mark among all players in the 2017 NBA draft. Bradley has a good understanding of how to track rebounds off the rim and throws his body into open spaces while using his length to rebound outside of his area. He did, however, struggle to finish at times after corralling rebounds, in part due to his lack of explosiveness and still-developing core strength. Bradley shot 58% on all attempts at the rim and can improve his ability to convert versus length, as he'll likely have to rely more on finesse than sheer size and mass at the NBA level.

While he didn't feature heavily on the offensive end, Bradley showed flashes of being able to make good decisions as a passer out of pick and roll actions and as a post-up player. He appears to have a solid basketball IQ, and despite very average assist numbers, Bradley seems to be willing and capable of making quick reads that lead to good looks for teammates. As a post-up player, Bradley has a ways to go with his footwork, which at this stage is very raw, relying on bullying his way to get to his right hand to finish.

As a face-up player, Bradley took only seven total jumpers as a freshman and shot only 61.6% from the free-throw line which doesn't immediately suggest an ability to be a reliable jump shooter but his mechanics are very solid. Still, Bradley has shown a surprisingly high skill-level in workouts, with smooth touch out to about 18 feet, and it wouldn't be shocking to see him develop into more of a threat with his jump-shot as his career progresses.

While Bradley has the physical size and length to be a rim protector and impactful defensive player, his timing and feel on that end have room for improvement. Bradley is often riddled with foul trouble, evidenced by his five personal fouls per 40 in his lone season at UNC. Bradley's tendency to foul compounded his ability to defend effectively as he appeared afraid to foul at times, giving up deep position to opposing bigs, not using his natural size to push them off the block. Around the basket, Bradley wasn't overly effective as a rim protector (1.6 blocks per 40 minutes) and his overall upside in that area could be somewhat limited given his below the rim nature, despite his massive standing reach.

Although he can move his feet in drop situations, at the NBA level it's unlikely that Bradley could be considered a consistent pick and roll switch man, but he does have the length to recover and challenge pick and pop bigs. Whether or not he can guard on the perimeter in space remains to be seen, but he does have a certain level of mobility and fluidity that is rare among players his size. Bradley does figure to make up for some of his defensive shortcomings on the backboards. His 7.0 defensive rebounds per 40 minutes isn't elite by any means but his natural size, huge reach, high motor and overall instincts on the glass should make him a positive in that area.

Bradley's natural size, bulk and length can't be taught, and the fact that he consistently plays hard will help him see the floor for stretches early in his career. He has a solid basketball IQ and a budding offensive skill set, and if he can continue to improve his touch around the rim, turn into a dominant rebounder on both ends and be good enough defensively to get by, Bradley could turn into a very serviceable rotation big even in an era full of floor-spacing, switch-heavy big men.
Read full article

Tony Bradley played a huge role in pacing the USA South team to a 4-0 record and eventual Nike Global Challenge Championship, thanks to his steady interior play and 26-point performance (12-of-15 shooting) in the finals.

At 6' 10 with a thick 250-pound frame and a 7' 4 wingspan, Bradley isn't a flashy prospect by any means. He's very thick in the lower body, he doesn't play exclusively above the rim, isn't a monster shot blocker, and he's not out on the perimeter stroking threes.

But with all of that said, Bradley gets it done. He's strong and mobile, he competes on both ends, he doesn't play outside of himself, and he has nice touch on the interior. Bradley scored at least 14 points in every game while manning the offensive and defensive boards and playing mistake-free basketball.

Bradley can finish with either hand on the interior, has a nice jump hook game for this level of his development, and really knows how to use his body against more athletic bigs.

Bradley isn't an explosive athlete but he's fairly nimble and can dive swiftly to the rim out of pick and roll sets and actually get off the floor quickly although he doesn't have much pop.

The Bartow, Florida native also does a nice job keeping the ball high in traffic, a skill most bigs at his age haven't yet mastered. Bradley's overall skill level is very important given the fact that he has a body type that will most likely have to carry quite a bit of weight for most of his career. He'll be somewhat forced to rely on touch, footwork, savvy, and advanced moves that he's working toward as he continues to develop.

Bradley also features a shooting stroke that he should be able to extend to at least mid-range spots in time. The ball comes out of his hand nicely, and given his solid mechanics, his touch should translate to his jumper with additional reps.

Although he may not have monster upside given his body type and lack of elite explosiveness, Bradley is ahead of a lot of bigs his age from a skill perspective, and should be able to parlay that along with his strength and IQ into a very good college career.
Read full article