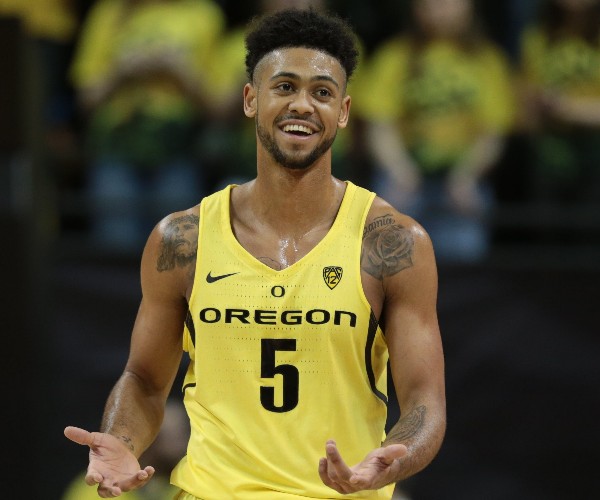 Tyler Dorsey ended his Oregon career with a bang, by averaging 26.9 points per 40 minutes in the NCAA Tournament on an extraordinary 78% true shooting percentage. He led the Ducks to the Final Four, and gained a considerable amount of NBA Draft buzz in the process. After an up and down two seasons, his hot streak could not have come at a better time for his draft stock, as he finished the year with eight straight games of 20 points or more.

The Pasadena native rode the momentum of his stellar March into the NBA Draft Combine, where he continued to impress with his scoring instincts, shot making, and overall confidence, culminating in two-game per 40 averages of 21.6 points, 8.5 rebounds, and 5.9 assists on 56% from two and 56% from three. With the continued emphasis on shooting at the NBA level in mind, Dorsey's stock has steadily climbed throughout the pre-draft process, as he reportedly shot the lights out in several different team workouts, and has become a very realistic option in the second round of the 2017 NBA Draft.

From a physical standpoint, Dorsey leaves something to be desired at 6'4.5 in shoes with just a 6'5.25 wingspan. His 183-pound frame is also below average for a shooting guard, and he doesn't make up for his subpar measurements with elite athleticism, as lacks stand-out quickness and plays almost exclusively below the rim.

Dorsey has found a way to overcome his ho-hum physical profile at the collegiate level, but there will most certainly be an adjustment period for the 21-year-old at the NBA level on both ends of the floor.

Where Dorsey's physical shortcomings don't come into play is as a shooter - his most translatable NBA skill. Dorsey's 42% three point field goal percentage ranked fourth among shooting guards in our top 100. He excels as a catch and shoot threat who can get his shot off from deep with his quick release and compact mechanics. Dorsey has tremendous confidence from virtually anywhere on the floor, evident by the 1.202 points per possession he scored on guarded' catch and shoot jumpers, which ranked in the 81st percentile according to Synergy Sports Technology.

Dorsey is also capable of getting his feet set quickly off of screens and handoffs, and can play off of his jump shot from there, attacking aggressive closeouts to score or playmake. In addition to his spot shooting and straight line slashing, Dorsey is confident pulling up from beyond the arc in transition or when defenders go under ball screens. While he's not going to break down defenders in isolation settings with his handle or change of speeds or direction, he uses screens effectively to get to his jumper off the bounce.

Dorsey certainly projects as a shot maker off the catch and in quick-hitting actions off the bounce, but he hasn't shown a high level of ball-handling ability and is primarily a straight line driver in the half court. He tries to use shoulder fakes and changes of speeds, but simply doesn't have all that much wiggle in his somewhat hunched frame, limiting his ability to create high percentage offense in the half court. Often an indicator of shot creation and finishing in the half court, Dorsey converted only 47% of two-point attempts in 24 games against teams with an over .500 win percentage, compared to an incredible 60% in 14 games versus teams with a win percentage under .500. Dorsey was able to get to the front of the rim versus less athletic teams, and he finished 57% of his shots at the cup over the course of the season, but his straight line style and below average extension at the rim limit him when faced with NBA length and athleticism.

Dorsey's skill level and craft can also improve in the paint to make up for some of his deficiencies, as he went 0-for-6 on floaters and only 5-for-20 on jumpers inside of 17 feet, begging the question - can Dorsey be more than a perimeter shooter at the NBA level?

Dorsey can fill it up as a scorer, but doesn't create much for his teammates, either, averaging just 2.3 assists per 40 minutes. While improved, he's more focused on his own scoring rather than setting up his others when he draws the defense. He keeps his eyes on the rim with the ball in his hands, which limits his vision and hinders his ability to find open teammates. He is strong on the ball, turning it over just 2.1 times per 40 minutes. He has had some success creating out of pick and rolls in small samples, and was much more unselfish at the NBA Combine with talent around him, but to have that translate to the next level, he will need to become a better decision maker overall.

Defensively, Dorsey is a bit behind the eight ball as he's not overly rangy. and lacks the length to bother jump shooters or attempts at the rim when beat. He's really best suited defending point guards, at 183 pounds with below average length, but he hasn't shown the elite quickness to keep lead guards in front. As is the case with many offensively focused college guards, Dorsey's effort level on the ball wavers. When he's locked in and up to the challenge, he does a solid job containing penetration, even if he's somewhat hunched over on the perimeter. Off the ball, Dorsey certainly has his ups and downs as well, often caught sleeping either in man to man or Oregon's zone. Dorsey will have to be competing at full force to be an adequate NBA defender given his average physical tools.

Overall few players have helped themselves more since March 1 than Tyler Dorsey. The 6'5 guard failed to reach double digits in 14 of Oregon's first 30 games, a stretch that included three games without a made field goal, but his March explosion will stick with NBA scouts and executives more than they may admit. Dorsey has a level of swagger about him and fearlessness in big moments that coaches covet. He cashed in on big shot after big shot in the NCAA Tournament and often raises his level of play when the stakes are high. Because of his unbalanced season and nearly unprecedented hot streak', scouts will have to parse out whether his performance in March was Dorsey clicking on all cylinders for an eight-game stretch, or whether he is really starting to put it all together to take the next leap in his game.

An interesting caveat in Dorsey's draftability is his mother's Greek routes. The California native was able to obtain a Greek passport prior to the 2015 U19 World Championships (thanks to his mother being Greek) and starred for Greece, posting a 32.6 PER over the course of seven games. The fact that Dorsey can count as a local player on any Greek power makes him a very attractive draft and stash option in the second round should an NBA team prefer not to keep him in the States to develop, provided Dorsey and his camp agree to that. His stock may have risen to the point that he no longer needs to consider that at this point, though.
Read full article

Tyler Dorsey did a nice job of acquanting himself to the NBA coaches in attendance who likely didn't have much of a chance to get to know him during the season, scoring an efficient 15 points with 6 assists and 0 turnovers in a win over Team 3. He demonstrated some ability to get to the basket with change of speeds and straight line drives in both directions, as well as the craftiness to finish with floaters and step-backs. Dorsey is a scorer through and through, but he didn't really force the issue and let the game come to him, which is important considering what his role will be at the next level. His shot-making ability (42% for 3 this season) both with his feet set and off the dribble is something that is at a huge premium in today's NBA, and the fact that he measured a little better than he had in the past (6'5 1/4 wingspan) and did not get taken advantage of defensively certainly helps his cause.
Read full article

Strengths:
-Good athlete. Operates at different speeds. Quick. Good first step. Can elevate a little around the basket
-Outstanding in transition
-Does a little bit of everything offensively
-Hit 52% of his 3-pointers on nearly 5 attempts per-40. Also 77% of free throws
-Has very good shooting mechanics. Was extremely reliable with feet set. Can also make shots off the dribble
-Almost never forced the issue. Made a real effort to be very unselfish. Made extra pass regularly
-Can read the floor and find the open man, particularly passing on the move
-Can create in one on one or pick and roll situations. Got to the free throw line at an outstanding clip (8.9 per-40)
-Competed on defense. Put huge effort in for the most part. Capable of moving feet and putting strong pressure on the defense when he's locked in. Averaged 3.2 steals per-40
-Rebounded exceptionally well for a guard (8 per-40). Even crashed the offensive glass with tenacity

Weaknesses:
-Physical profile is average for the shooting guard position he plays. Only around 180 pounds
-Sports a negative wingspan (6-3 ½), measured smaller than his height (6-4 ¼ in shoes)
-Struggled to finish around the basket. Lacks great strength or length, which makes it difficult for him to convert shots in traffic at times
-Awareness on defense leaves something to be desired at times. When he's playing at full intensity he's solid. But when he doesn't he really struggles.

Outlook: Had a tremendous tournament at the U19s. 25 points per-40, with outstanding efficiency (69% TS%). Looked like a completely different player than the one we saw in high school at times, particularly defensively. Accepted a compact role playing around 20 minutes per game, despite being by far the most productive player on his team. Made a real effort to fit in and play to his strengths. Was extremely successful. Named to the all-tournament first team. Certainly helped his stock going into his freshman year of college, and likely his basketball IQ as well.
Read full article