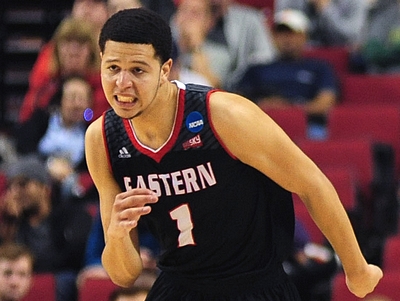 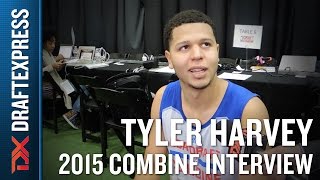 Harvey will be 22 years old by the time the season starts, and will need to quickly tone and strengthen his frame to handle the physicality of the NBA game. Teams looking for a scorer off the bench to provide points in bunches could look to Harvey and hope he can get his shot off against NBA defenses. Harvey will need to adjust to a different offensive role and make sure he improves his shot selection, as he would look to shoot every time he had the ball for the Eagles. If he can take smart shots while keeping his teammates involved, he can become a nice off the bench scorer for a NBA team.
Read full article

Matt Williams
@DraftExpress
Tyler Harvey is one of the best shooter-scorers you'll find, an absolutely lights out marksman who is liable to pull-up off the dribble from half-court if given even the slightest glimmer of daylight. His defense leaves a lot to be desired, and he isn't blessed with great size, but he is a better athlete and a more versatile shot-creator than most of the shoot-first gunners we see coming out of the low-major ranks. With a strong Tournament showing, he could very well put himself on the NBA Draft radar in a serious way, if he wasn't there already.
Read full article