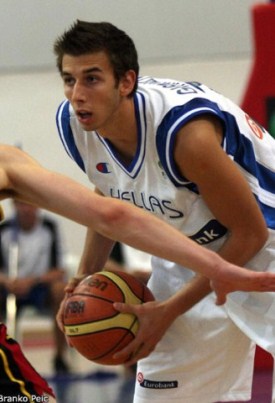 Matt Williams
@DraftExpress
While fellow prospect Charalampos Giannopoulos hasn't emerged as a high level prospect in a bit part for Panionios, Vladimir Jankovic has relished his opportunity. A solid athlete, the 20 year old Jankovic hasn't posted impressive numbers in just 10 minutes per-game, but he's flashed some nice tools. Standing 6'8 with long arms, Jankovic has nice size for a small forward, the position he's played exclusively this season. Capable of knocking down catch and shoot jump shots with range, but quick enough to get to the rim off the dribble in the Greek League, Jankovic is a smart finisher with promising mechanics on his shot.

A low mistake player, the keys for Jankovic will be developing his body, gaining experience, improving his consistency and refining his perimeter scoring arsenal. At the moment, most of his offense comes from catch and shoot jump shots and basic straight-line drives. The young Serbian-Greek wing uses changes of speeds fairly well, but still needs to refine his ball handling ability and pull up jumper to better prepare himself to deal with the more athletic defenders he'd face in the NBA. He could also stand to become more reliable with his feet set to help him spread the floor.

Having made 10 of the 19 shots he's attempted this season, Jankovic has played well when he's seen the floor. His ability to garner consistent minutes will be important to his development in the coming seasons, as he shows a nice skills level, but hasn't carved out an identity as more than a roleplayer.

Defensively, Jankovic holds his own substantially better than many prospects his age. He has solid lateral quickness for the European game, but is effective because he plays with a terrific effort level and won't back down from a challenge. If he can pack some muscle onto his frame to help him fight over screens and defend around the basket, he could project as a passable NBA defender.

With the rest of this and next season to improve his game, Jankovic is definitely a player to keep an eye on moving forward. His size, length, and intensity on the defensive end could allow him to generate some draft buzz if he makes progress offensively, gains some weight, and begins to see more playing time.
Read full article

Luis Fernández
@DraftExpress
Let's not forget Vladimir Jankovic, the Serbian native (son of Boban Jankovic) who went off to an excellent tournament start, but fell injured in the third game against Belgium.

The swingman, who stands somewhere between 6-7 and 6-8, showcased a decent perimeter touch from standstill positions, as well as the ability to knock down shots off the dribble, but especially took advantage of his athleticism and footwork to score off slashing and fastbreak situations. He also gave a serious hand in the rebounding department, cashing in off his leaping ability and notable wingspan. Not always under control, he still enjoys nice potential. He will play on loan in Serbia this year for Mega Ishrana, and has a long-term contract with Panionios.
Read full article

Luis Fernández
@DraftExpress
Finally, even if not nearly as important as the three aforementioned players, Vladimir Jankovic showed some decent potential as a regular starter and a real defensive presence. Standing somewhere between 6-7 and 6-8, he's a nicely athletic wing with long arms and an underdeveloped, but promising body. Very inconsistent with his perimeter stroke, he neither was able to provide regular production going inside despite his ability to break defenses thanks to his nice footwork and decent ball-handling skills, as he could barely get anything done against contact. Jankovic needs to gain strength, better balance and body control to emerge more effective.
Read full article