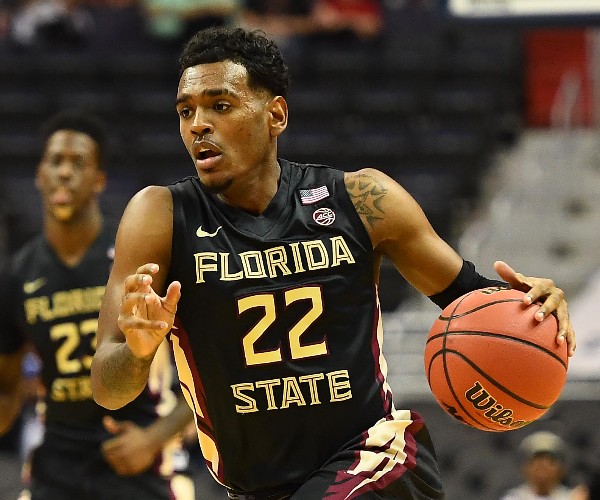 The 40th ranked recruit by RSCI in 2013, Xavier Rathan-Mayes choose to follow in his father's footsteps and attend Florida State University. Unfortunately, he was ruled ineligible for his freshman season due to issues with his high school courses which put his collegiate career on hold.

After receiving a redshirt in his first year, Rathan-Mayes burst back onto the scene in 2014-15, becoming the ninth leading scorer in the ACC at 14.9 points per game, and earning a place on the ACC All-Freshman team. He scored points in bunches, including a 30 point outburst in the last four and a half minutes in a loss to Miami. A strong second season should put him strongly in draft conversations, as he has several skills that NBA teams will covet. 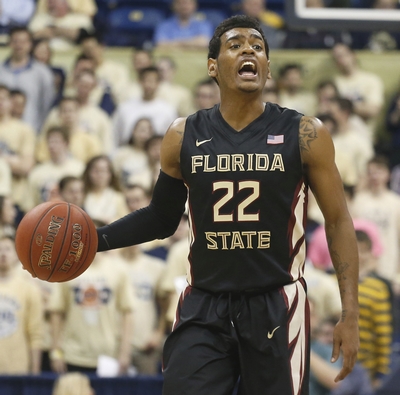 Entering FSU as a shooting guard, he has transitioned to more of a point guard role for the Seminoles. He has still taken on a big scoring role, but also improved over the year as the initiator of the offense. Almost 39% of his offensive possessions come off pick and rolls, according to Synergy Sports Technology, and he has become adept at using the screen to get into the lane and create offense. He isn't always able to shake his defender off the dribble and get into the lane using purely his first step, so he needs that screen to get separation from his defender.

He uses ball screens well, setting up his opponent with some misdirection to run him into the screen and then using changes of speeds to beat the help defense once he gets into the paint. He has solid size for a combo guard, listed at 6'4, which helps him around the rim, as he converts 55% of his half-court shots attempts inside the paint according to Synergy Sports Technology. He doesn't have high-level explosiveness, but he is able to find open shots at the rim either through his change of pace or avoiding the defender when they try to block his shot.

He gets to the line at a decent clip, averaging 5.0 free throw attempts per 40 minutes pace adjusted and his aggressiveness around the rim to absorb contact will help him score if he can't convert over NBA centers. He may need to develop a floater to become a better paint scorer at the next level which will give him several weapons to choose from when he is around the rim as a pro.

This ability to run the pick and roll will catch the eye of NBA scouts and he has shown he can pass well out the action, with 4.8 assists per 40 minutes pace adjusted. He has good vision and can deliver clean passes to his teammates. He does need to cut down on turnovers, as he gets into trouble when he dribbles into traffic or tries to make highlight-reel passes. His 3.8 turnovers per 40 minutes pace adjusted was the most of any ACC point guard. Showing improvement in his decision making out of the point guard role in his second season will help boost his draft stock, as his -1.48 pure point rating as a freshman left a lot to be desired.

His best skill coming into the season was considered to be his outside shooting, but he struggled last season, connecting on just 28% of three pointers and 33.6% of all jump shots according to Synergy Sports Technology. His stroke is pure, though, and with better shot-selection and more help around him, it appears he can rebound from a down year. He looks more comfortable in catch and shoot situations, either from a stand-still position or running off screens, but more than twice as many of his attempts came off the dribble, a cause of the ball being in his hands so often. He isn't afraid to shoot, as shown from his 6.0 three point attempts per 40 minutes pace adjusted, and he has deep range.

Despite his low percentages last season, he still has potential to be a good shooter at the next level, although a second straight below average shooting season may see more serious questions begin to arise.

Rathan-Mayes doesn't project to be a great defender at this time, but won't detract defensively. He'll be able to match-up with most players size wise, but he doesn't have great length, last measured at 6'5 in 2012. On the ball, he moves laterally well but struggles with his footwork, as he can get either get caught flat-footed or over-commit into an off-balance position, allowing his opponent to drive by him.

Off the ball, he is still learning proper defensive principles, as he doesn't always make the right read or rotation. However, he does display consistent energy, even if it hasn't yet translated to great decision making yet. Although he may never become a top of the line individual defender, improving as a team defender will support his offensive skill set and raise his profile.

Rathan-Mayes will turn 22 in April and is the same age as many seniors, despite only going into his second season of college basketball, so there is some added pressure to add to his draft stock this year. He's already shown he can put up points in a hurry, so a better shooting performance over the full year along with stronger decision making with the ball in his hands should demonstrate he can be a more complete player. He isn't a high-level athlete, so showing improvement as a passer and shooter is crucial to demonstrate to scouts he can be a versatile threat at the next level.

A strong incoming recruiting class should give him more ammunition to work with, which will help him exhibit his playmaking skills. In his second full season, scouts will be expecting a big leap out of him as he becomes more comfortable in his point guard role. If he makes that jump, his name could move up draft boards quickly.
Read full article

Strengths:
-Pure scorer
-Confident, prolific shooter with feet set or off the dribble
-Quick release and excellent shooting mechanics
-Deep deep range
-Creates separation very well from defender in the mid-range
-Solid frame. 6-5 wingspan
-Solid basketball IQ. Finds open man
-Majority of field goal attempts are 3-pointers, but made 40% in the EYBL
-Has a swagger about him. Never changes his face. Never looks rattled
-Some back to the basket ability.

Weaknesses:
-Only 6-2 ½ in shoes
-More of a shooting guard than a point guard
-Average athlete
-Will take some bad shots occasionally
-Needs to improve ball-handling/ability to score inside the paint
-Doesn't get to the free throw line
-Does not project as a great defender

Outlook:
Prolific shooter/scorer who should be able to contribute immediately at the college level. A little bit undersized as far as the NBA is concerned, but has tremendous scoring instincts and is not just a one-dimensional spot-up shooter.