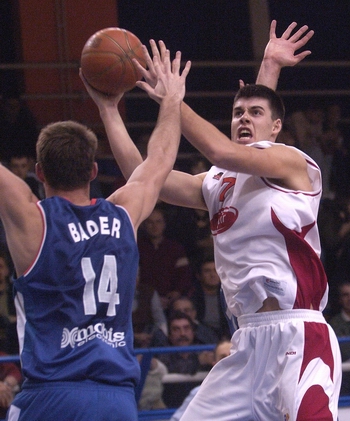 Kristian Hohnjec
@DraftExpress
Zoran Erceg had a very good season, being roughly FMP Zelezniks most consistent performer. He received an increased role within their offensive sets and proved to be capable of taking a larger scoring burden on his shoulders. Zoran is a typical European Power Forward, possessing a refined face-up game, but lacking strength and willingness to make his way in the low post.

Even if he is not a prototypical NBA prospect and didnt show much progress in the areas of concern, Erceg certainly helped himself by putting together a good season in European competition, particularly in the strong ULEB Cup, where FMP knocked off Hapoel Jerusalem and reached the Final game. Someone might take a shot at him in the 2nd round, because of his size, ability to run the floor and shooting. Europeans usually get serious looks in the bottom half of 2nd round because of the advantage of being able to stash them in Europe and develop at others expense, so Zoran might be one of those players who gets drafted and is asked to keep playing on the Old Continent until he is ready to contribute.
Read full article

Luis Fernández
@DraftExpress
Erceg is looking like quite a consistent big man this season, probably as much as his age and underdeveloped body allow him to be. His height (6-11), decent-to-nice athleticism and skill repertoire (hes a versatile power forward with inside-outside game) are surely drawing attention in the NBA front offices, but another question is whether he will convince some team to pull the trigger on him.

2277
Hes not a bruiser, nor a hustler; hes not a great defender or a remarkable rebounder; hes not a great passer or game creator; he doesnt have an NBA body; hes a finesse big man who lives off his scoring abilities, hes an offensive specialist NBA-wise with questionable effectiveness due to his thin frame. The problem here is, unless youre really a superb offensive player, it rarely makes the cut. Usually, only star players are allowed to remain as scoring specialists in the NBA, and thats even more obvious when it comes to European guys, who often struggle with the level of toughness, strength and athleticism that the NBA requires. Erceg would need to really master his skills, because he would likely be regularly outmuscled on both ends of the court.

Still, you dont find 6-11 guys with Ercegs abilities every day. He can shoot, he can drive, he can even play in the low post if his opponents strength allow him to, he understands the game, he has nice mobility, he is a real basketball player. Even if not very likely, by no means we should rule out that he could become a useful guy as he develops physically. If a somehow similar type of player like Oleksiy Pecherov (tougher, bigger physically and better rounded, thats true) managed to sneak into the first round in last years draft, Erceg certainly has a fair chance to hear his name called next month.
Read full article

Luis Fernández
@DraftExpress
Erceg, a 6-11 skilled and skinny power forward with average athleticism, is not what you call a top prospect, and he could even end up going undrafted this upcoming June. However, we shouldnt underestimate him. Hes having a notable season, and is a guy who still has potential to fulfil. His combination of size, basketball IQ and skill repertoire looks fairly intriguing. The physical development he surely has ahead of him will likely make him a significantly better player, although its fair to stress that his frame is not the best around to add weight, as his shoulders are a bit narrow.

Anyway, hes a player with a nice combination of face-up and low-post game, although inside the paint he often suffers from his lack of strength. He has some troubles establishing good position to receive the ball and still doesnt feel confident to play much in one-on-one situations down low, likely due to his inferior physical profile (actually, his moves are decent and he can finish with both hands near the basket), preferring many times to send the ball back to the perimeter-- and showing nice decision making in the process, by the way. Facing the basket he can either shoot the ball with very nice mechanics and (still inconsistent) three-point range or put the ball on the floor, not a usual option for him at this point. Besides, he moves pretty well off the ball to get open looks near the basket. On the defensive end, hes not much of a factor, being eventually outmuscled, showing average lateral quickness and not being the most intense guy around. This is an area where he needs to put more effort and work.

Again, not a very glamorous project, not really very NBA friendly (size aside), but who could evolve into a very nice player down the road. For the moment, he was already called by the Serbian National Team last summer, although he was left out of the final 12-men roster despite shining in some preparation games (against the World Champions, Spain, for example).
Read full article

Kristian Hohnjec
@DraftExpress
Erceg has very nice size and is a solid athlete with nice mobility. He possesses a reasonably quick first step, although he lacks some explosiveness, especially vertically. His best strengths lie in his ball-handling and shooting ability. Zoran has a beautiful jump-shot with smooth mechanics and great touch. He is very consistent from 18-20 feet, but his percentages drop a little when stepping behind the arc  where he is around 30% for the season. Erceg is also a good ball-handler, and doesn't have any troubles putting the ball on the floor far away from the basket and creating his own shot. His passing off the dribble has also improved considerably, and he is now regarded as an above average distributor, although he prefers to finish plays by himself.

Zoran is a typical perimeter oriented big man who spends most of the time outside of the painted area, even if he is more willing to mix it up inside then he was before. Erceg is a below average rebounder and shot-blocker for his position, and he doesn't excel guarding the perimeter either.

Being automatically eligible for June's draft, Erceg has a shot to get drafted in the 2nd round thanks to his ability to put the ball in the basket. While it is pretty clear that he will never be a force down low, Erceg could fit in the role of a sweet-shooting big man off the bench to stretch opposing defenses, and lure their big men outside of the paint.
Read full article

Luis Fernández
@DraftExpress
Erceg, a 1985-born player and therefore automatically eligible for the next draft, joins the second-round-bubble group of internationals that might be selected for some NBA team to stash in Europe hoping for successful development. At 6-11, he displays a nice combination of size, athleticism and skills. Hes a fundamentally sound and quite versatile player who can either face the basket to shoot from the perimeter, put the ball on the floor for slashing purposes, or play with his back to the basket in the low post, while he also looks active without the ball. On the downside, hes a bit skinny and doesnt enjoy the greatest frame, sometimes lacking a certain degree of aggressiveness, and struggling a bit in the rebounding department or when it comes to getting the job done after receiving the ball under the rim. He currently averages 13.4 points and 4.8 rebounds, and his future on the international scene seems quite promising (he already was in the pre-selection of the Serbian National Team last summer).
Read full article

Kristian Hohnjec
@DraftExpress
Erceg surprisingly got some action, after in the regular season he only played in garbage time. He looked like a decent athlete in the minutes he received, very mobile and quite fast. He was able to take his man off the dribble and made it clear that he is a perimeter oriented PF. He was taking shots close to the 3 point line, so obviously he has some range on his jumper. He looked very confident when stepping out on to the floor and was not afraid of taking responsibility. As expected he is very skinny and is not a force inside the paint at all at this point. Erceg has plenty of time to develop his game and be ready to contribute first at this level, so talking about his NBA future right now is definitely premature.
Read full article