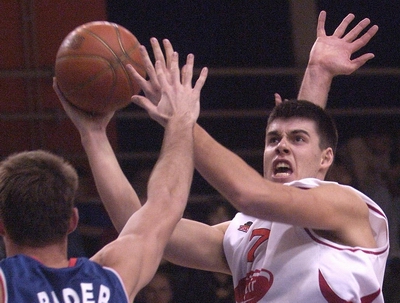 Luis Fernández
@DraftExpress
It has been a tough call this time to pick our Player of the Week nominee. We had a few intriguing performances, but none really standing out among the rest. So we decided to go with Zoran Erceg, a second-round bubble candidate for the upcoming draft who is enjoying his last chances of claiming consideration for that event. Last week he certainly delivered, upping FMP to the top of the Serbian SuperLeague. Another remarkable performer this past week was point guard Yogev Ohayon, not much of a NBA prospect, but an excellent player for international basket; we take a long look at him.

Player of the Week: Zoran Erceg

FMP tied Hemofarm this past week at the top of the Serbian SuperLeague following the excellent display of Zoran Erceg. He had 16 points in a victory against Partizan that allowed FMP to surpass the Serbian powerhouse in the ladder. A few days later, Erceg erupted for 24 points, 5 rebounds and 2 steals, while FMP consolidated its top position by easily beating Vojvodina.

Erceg is looking like quite a consistent big man this season, probably as much as his age and underdeveloped body allow him to be. His height (6-11), decent-to-nice athleticism and skill repertoire (hes a versatile power forward with inside-outside game) are surely drawing attention in the NBA front offices, but another question is whether he will convince some team to pull the trigger on him.

2277
Hes not a bruiser, nor a hustler; hes not a great defender or a remarkable rebounder; hes not a great passer or game creator; he doesnt have an NBA body; hes a finesse big man who lives off his scoring abilities, hes an offensive specialist NBA-wise with questionable effectiveness due to his thin frame. The problem here is, unless youre really a superb offensive player, it rarely makes the cut. Usually, only star players are allowed to remain as scoring specialists in the NBA, and thats even more obvious when it comes to European guys, who often struggle with the level of toughness, strength and athleticism that the NBA requires. Erceg would need to really master his skills, because he would likely be regularly outmuscled on both ends of the court.

Still, you dont find 6-11 guys with Ercegs abilities every day. He can shoot, he can drive, he can even play in the low post if his opponents strength allow him to, he understands the game, he has nice mobility, he is a real basketball player. Even if not very likely, by no means we should rule out that he could become a useful guy as he develops physically. If a somehow similar type of player like Oleksiy Pecherov (tougher, bigger physically and better rounded, thats true) managed to sneak into the first round in last years draft, Erceg certainly has a fair chance to hear his name called next month.

Yogev Ohayon, who stepped up this last week to lead Galil Elyon to the Israeli League semifinals. Ohayon matched his scoring career-high with 24 points in the penultimate game of the regular season, a decisive showdown against the other contender for that last semifinal spot, Ironi Nahariya. He also added 3 rebounds, 8 assists and 2 steals. A few days later, he recorded a career-high 11 assists to go along with 14 points, 5 rebounds and 4 steals to solidify the semifinal appearance. Actually, Ohayon has enjoyed a strong final rush in the regular season, with 17.7 ppg in the last four games.

Ohayon is very much the same played we saw at the 2005 U-18 European Championship, a classic distributing point guard with limited physical and athletic gifts, but more than enough talent to effectively run a teams offense.

At 6-2, the lefty Israeli playmaker is a bit undersized and not particularly athletic. He wont light up most defenders with his quickness, but relies on his very solid skill repertoire to get the job done (even if sometimes its not enough). A very nice ball-handler, Ohayon uses both hands and a variety of direction changes to beat his opponents, particularly crossover moves and reverses, showing excellent footwork in the process. Hes a poised and smart player who rarely gets out of control and likes to involve his teammates in the offense. Yogev enjoys remarkable court vision that he puts on display to feed his distributing vocation. His ability to dish assists off the dribble after beating his match-up and force defensive rotations is beautiful. But he can also play from the perimeter, feeding the big guys and generating ball movement. All in all, he has the makings of a real floor general.

Ohayon can score points as well. He has been steadily improving his perimeter stroke over the past few seasons, although theres still work to do. Anyway, he shows nice quick mechanics to release the ball. Hes rather effective from the mid-range area, even shooting off-the-dribble. Around the basket, hes quite skilled delivering left-handed layups. Not the best defender around, he logically suffers from his physical shortcomings, but still he does a decent job.

Obviously this doesnt look like the profile of a NBA player. But still, its fair to expect Ohayon to become a very nice player in Europe, even a premier point guard if he maximizes his potential.

Omri Casspi followed Yogev Ohayons efforts to help Galil Elyon advance to the semifinals in the Israeli league. He had 14 points in the crucial thriller against Ironi Nahariya, and improved to 22 points and 5 rebounds in the regular seasons closer versus Ironi Ashkelon.

Danilo Gallinari is emerging as a key piece in the playoffs for Armani Jeans Milano, and his input has resulted invaluable for his team to reach the semifinals in the domestic league. He was probably the best player in the third-game loss against Whirpool Varese with 14 points, 8 rebounds and 2 steals. Actually he was the only player in Milano to finish with positive plus/minus figures in the game. He kept his offensive punch in the decisive fourth game that sealed Milanos passport for the next stage, with 15 points, 3 rebounds and 2 assists. Again this time he displayed the best plus/minus stats in his team.

Nemanja Aleksandrov delivered a season-high 25 points in the Serbian SuperLeague in the victory over Masinac, also adding 3 rebounds, 3 assists and 2 steals. Its probably his best game this season, although the rival is far from being among the crop in the Balkan league. Actually Crvena Zvezda rolled over them by almost 30 points. At least Aleksandrov is giving good signs to think about a much more consistent season next year.

Igor Milosevic chose the other game Crvena Zvezda had last week to step up and showcase his abilities. With 21 points and 3 steals, he led his team in the classic rivalry showdown against Partizan (actually, a much more serious rival than Masinac). Unfortunately, they fell 5 points short of the victory. Its interesting to note that Milosevic couldnt dish even a single assist despite his offensive activity. Hes certainly not the most distributing-oriented playmaker.

Rudy Fernández couldnt stop Gran Canaria Grupo Dunas from tying the quarterfinal series in the ACB playoffs, despite scoring 23 points and grabbing 4 rebounds in the fourth game. Its impressive to see how Rudy has been able to reach double digits in scoring in the last 16 games in the ACB league.

Mirza Teletovic lost the little credit coach Maljkovic had given him the very same moment Tau Vitoria signed Lou Roe for the playoffs. Hes now the fifth man in the inside rotation and only played some garbage time in the first and third games of the quarterfinal series against Unicaja Málaga (even then, he went scoreless), just to see the entire second game from the bench, despite the fact that Tau enjoyed 20-points advantages during some stretches (they finished the game 16 points up).
Read Next...