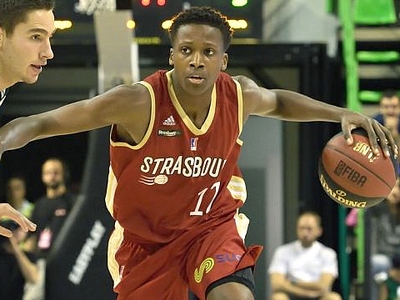 Jonathan Givony
@DraftExpress
We take a look at five of the best guard and wing prospects to emerge at the 2016 Basketball Without Borders Global Camp held in Toronto during All-Star Weekend.

Strengths:
-Has excellent size for a point guard at 6'5, to go along with a nice frame and a very long wingspan (possibly close to 7-feet).
-Plays with terrific pace. Never looks rushed. Has the ball on a string. Knows when to speed up and when to slow down. Has outstanding potential on the pick and roll.
-Terrific passer with exquisite court vision. Distributes in many different ways. Constantly looking to find open man. Extremely unselfish.
-Seems to be making progress with his outside shot. Knocked down jumpers all camp long, particularly shooting off the dribble. Shooting 85% from the free throw line this season, which is encouraging.
-Multi-positional defender. Has excellent tools to lock down either guard spot with size and length, but also puts great pride in his work on this end of the floor. Can put strong pressure on the ball. Does a great job of staying in front.
-Gets blocks, steals and rebounds with his physical tools and feel for the game
-Terrific intangibles and family background. Looks like a coach's dream.

Weaknesses:
-Career 72/231 (31%) 3-point shooter. Showed the ability to throw the ball in the basket, but still does not have ideal mechanics and has struggled in particular in French junior league play this season (16/66 3P in 14 games).
-Unselfish to a fault at times. Overpasses when it would be in his team's best interest for him to simply go and score. Spent too much time trying to get his lesser-talented teammates involved, which may have contributed to relegating his BWB team to the loser's bracket.
-Doesn't get to the free throw line at a great rate, partially due to lack of aggressiveness and partially due to lack of strength.
-Still filling out physically like most 17-year olds. Lack of strength has hampered him from seeing too many minutes at pro level thus far.

Outlook: Incredibly mature 17-year old. Carries himself like a pro. Arguably the top prospect at the entire camp in terms of physical tools, current production and long-term upside. Continues to improve every time we see him. Seeing a handful of minutes at the highest levels of European basketball with Strasbourg as a third string PG.

Strengths:
-Great size for a PG. Very strong frame that continues to fill out.
-Excellent pick and roll player. Strong ball-handler who uses changes of speeds and directions. Finds teammates off the dribble with bounce passes, lobs and kick-outs. Extremely creative with the way he distributes the ball
-Will make an occasional catch and shoot jumper
-Has the size to defend either guard position

Weaknesses:
-Lacks a degree of aggressiveness at times. Doesn't always look comfortable improvising. Needs structure and guidance.
-Somewhat introverted. Doesn't have much of a court presence in terms of leadership skills.
-Jump-shot is still a work in progress. Has some side-spin action and a bit of a hitch in his release at times.
-Needs to improve off-hand.

Outlook: Top-shelf college prospect. Seems to be making significant strides with his basketball IQ and skill-level. Started off slow but was extremely impressive in the last two days of the camp. Size and passing ability gives him a chance to emerge as an interesting prospect down the road.

Strengths:
-Has great size for a wing player at 6'9. Long wingspan (likely a little over 7-feet). Body seems to be developing nicely
-Fluid athlete. Plays above the rim with ease. Threw some some highlight-reel caliber dunks.
-Excellent potential as an outside shooter. Can make shots with feet set or off the dribble, even showed the ability to come off screens.
-Gets his shots off quickly and easily. Soft touch and beautiful follow through. Creates separation from defenders nicely. Just throws the ball in the basket from difficult angles
-Shows some impressive potential as a ball-handler. Big, swooping crossovers
-Creative player with good court vision. Will make some very flashy passes at times.

Weaknesses:
-Body is still a work in progress. Will take him another few years to fill out.
-Still working on becoming a more prolific scorer inside the arc. Very reliant on his jumper. Handle is flashy but needs to get much more compact to be utilized effectively in games.
-Tends to avoid contact at times around the basket. Will need to develop the mentality needed to take advantage of his superior athletic tools
-Lacks a degree of toughness
-Jumper is very pretty, but is still somewhat inconsistent overall in terms of results. Release can be sped up somewhat. Tends to elevate and shoot the ball on the way down at times.
-Not a particularly good defender. Partially a product of lack of strength, but also due to his average fundamentals and intensity level.

Outlook: Lithuanian who elected to sign in Germany this past summer. Has gained almost 15 pounds since arriving in Germany. May have been the breakout performer of the camp from an NBA standpoint. Has tremendous tools and talent with significant upside to continue to improve in all facets. Still in an early stage of his development, as somewhat of a late bloomer. Will need to continue to mature to realize his full potential.

Strengths:
-Has great size for a wing player at 6'9
-Frame is immature, but looks like it should fill out nicely in time. Very well proportioned
-Fluid athlete with some ability to get up around the rim
-Fundamentally sound player. Excellent shooting mechanics. Sets feet and gets shot off instantaneously. Shows potential coming off screens, as well as shooting off the dribble
-Can attack closeouts with nice footwork
-Shows the willingness to compete on defense. Gets over screens. Will surprise you with an occasional block rotating from the weakside.

Weaknesses:
-Has a beautiful stroke, but hasn't found consistency as a shooter yet. Results aren't always there. Sometimes misses badly
-Gets somewhat down on himself at times, especially when shot isn't falling
-Still working on his ball-handling skills. Loose, high handle.
-So tall that he has a difficult time staying in front of other players at his position defensively. Somewhat upright in his stance
-Frame is at an early stage of development and will take time to fill out

Outlook: Committed to St. John's. Will be a very young freshman next year. Very talented long-term prospect who will need to continue to fill out his frame and improve his skill-level to reach his full potential.

Strengths:
-Has good size for a wing at around 6'7, with a very strong frame and solid length. Fluid athlete who can play above the rim
-Very versatile player who does virtually everything on the floor at this stage
-Loves to grab a defensive rebound and take the ball coast to coast
-A freight train in transition. Bounces off opponents. Has excellent body control.
-Prolific slasher in half-court as well. Drives straight into the teeth of the defense and takes hits around the rim willingly. Shows some creativity as a finisher
-Has excellent court vision and an advanced feel for the game for his age. Makes full-court passes ahead in transition and drive and dish plays in the half-court. Sees the double-team coming and passes out of the post.
-Can carve out position in the post with his huge lower body. Has some ability to score with back to the basket
-Not a total non-shooter. Made a handful of jumpers with feet set and off the dribble showing nice touch
-Multi-positional defender. Uses his length and feel to contest shots all over the floor. Gets in passing lanes regularly.
-Has incredible self-confidence and swagger for someone his age.

Weaknesses:
-Lacks a degree of explosiveness. Has the type of frame that could get out of shape quickly if he's not careful
-Very inconsistent shooter at this stage. Rigid release that makes it difficult for him to get a shot off cleanly when closely contested
-Very emotional guy. Had some outbursts that rubbed some the wrong way. Extremely competitive but needs to do a better job of channeling his energy
-Borderline cocky at times. Can get out of control and force the issue. Very good passer but seemed to freeze out his teammates as camp moved on.

Outlook: Born in Sudan and emigrated to Canada when he was very young. Extremely unique talent who is very unheralded at this stage. Currently considered a mid-major caliber prospect by recruiting services, but undoubtedly will end up playing at the highest levels of college basketball. Do it all forward who guards many different positons and can play a variety of roles offensively. Will need to become a much better shooter to reach his full potential. May end up playing some power forward in college.
Read Next...