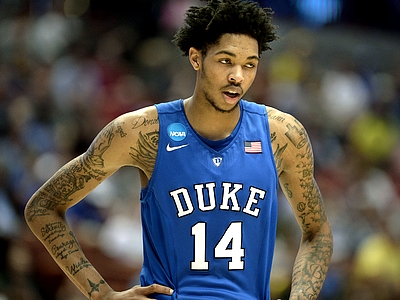 A late bloomer physically, Brandon Ingram got somewhat of a late start compared with other prospects in his class, only standing 6'2 as a high school freshman. He shot up almost eight inches over the next four years, but didn't establish himself as one of the very best prospects in his class until the end of his high school career, when an outstanding showing at the McDonald's All-American game and practices led to an invite to the Nike Hoop Summit following an injury to Henry Ellenson, the first call he had received from USA Basketball up until that point.

It was at the Hoop Summit that we saw the first public measurements on Ingram, with his 7'3 wingspan and 9'1 ½ standing reach that is more like that of a NBA center than the small forward position he's mostly projected at. Still, at 196 pounds, the then 17-year old had (and still has) a long ways to go to fill out his lanky frame, something it looks like he should be able to do with his wide shoulders.

The same can be said about Ingram reaching his athletic upside, which is very much a work in progress as it often is with players who hit late growth spurts. Ingram is extremely fluid for a player his size, possessing long strides and nice quickness getting off the floor, but does not show elite explosiveness at this point in time, struggling to turn the corner or finish above the rim through contact. Gaining strength in his lower body and core will be extremely important in unlocking his abilities as a creator, finisher and defender, as he's still in the gangly physical phase prospects in his mold often have to get past to reach their full potential.

Nevertheless, Ingram played a substantial role for Duke this past season, one of the elite offenses in college basketball. 44% of his possessions came off isolations, pick and rolls (as the ball-handler), hand-offs and transition opportunities according to Synergy Sports Technology, which is more similar to the profile of most guards than your typical forward. While playing primarily power forward defensively, Coach K utilized Ingram as his primary creator at times, using his long strides to attack in the open court off defensive rebounds, as well as his ability to handle the ball and operate in one on one situations in the half-court.

Ingram's high skill-level starts with his jump-shot, which was extremely reliable all season long, making 41% of his 3-pointers on nearly 200 attempts through 36 games. He's most dangerous with his feet set, hitting 42% of his catch and shoot jumpers on the season (1.247 PPP, 3rd best among all draft prospects behind Buddy Hield and Jamal Murray), as he has fluid and consistent mechanics, a quick release, and is very intelligent about the way he moves off the ball and finds open looks.

Ingram has significant potential as a shot-creator as well, as he's an impressive ball-handler at his size, showing terrific footwork, and big, rangy strides attacking off the dribble. He mixes in jab-steps, shot-fakes, crossovers and hesitation moves to create space off the bounce, as the threat of his jumper means he needs to be respected at all times from the perimeter. It helps that he is both a willing and able passer, seeing the floor well at 6'10, being highly unselfish, even to a fault at times.

As he continues to add strength, Ingram will be a significant mismatch for NBA defenses, as he's simply too big for most wing players, and too skilled for many power forwards in small-ball lineups. He can rise up and hit jumpers over the top of the defense if they back off him or use a smaller wing to try and slow him down, or go to work off the dribble with a more traditional big man checking him, finishing creatively around the basket from different angles using his length.

Improving his ability to make shots off the dribble will be a major key in becoming a go-to guy potentially at the NBA level. He shoots a somewhat flat ball, converting just 30% of his 80 attempts this season. His lack of strength and explosiveness made it easier for defenders to get up in his body and knock him off his spots, and he can't always turn the corner and rise up over defenders at this stage of his development, looking somewhat upright with his very long legs, high hips and narrow lower body.


Ingram struggled to finish around the basket at times against higher level competition, converting just 48% of his half-court looks inside the paint on the season overall (SST). He got to the free throw line at just a decent rate (5.6 per-40), and surprisingly struggled at times once there, making just 68% of his attempts. While he showed the willingness to go into the post and use his size and footwork, mostly to shoot smooth turnaround jumpers, he simply doesn't have the strength to operate in there consistently at this stage.

Defensively is where Ingram surprised many this year with his underrated combination of toughness and competiveness. While his fundamentals need work, his size, length and reach gives him great versatility when paired with his willingness to get stops. He showed the ability to switch out onto guards effectively at times out of pick and rolls from the power forward position, sagging off and staying in front, while still getting a hand up to contest thanks to his 7'3 wingspan.

With that said, Ingram still has a ways to go to become a more consistent defender, something that clearly didn't become a priority for him until arriving in college. He can get a little sleepy at times and lose his focus, closing out lackadaisically, standing around off the ball and looking hunched over in his stance guarding the perimeter. Duke had one of the smallest rotations in high major college basketball and couldn't afford for Ingram to get in foul trouble, which didn't always lead to him operating with the highest intensity at all times. Once again, getting stronger will help, as he tends to get caught up on screens quite a bit on the perimeter and can get pushed around inside the paint.

Ingram has some other things working in his favor that should contribute significantly to him reaching his full potential. For one, he's the youngest collegiate player in this draft, not turning 19 until September. He could easily still be in high school, as he's younger than eight of the players who competed at this year's McDonald's All-American game. He draws rave reviews from everyone he's been around for his work ethic, character, and competitiveness, and is by all accounts the kind of person you'd like to build around for those who value team culture, being described as a a no-maintenance guy by his head coach at Duke.

While he had a tremendous freshman season, being named ACC-Rookie of the Year and Second Team All-Conference, he doesn't appear anywhere close to reaching his ceiling. Few projected Ingram to get consideration as the #1 pick before the season started, but that's exactly what he did with the rapid improvement he made.
Read Next...