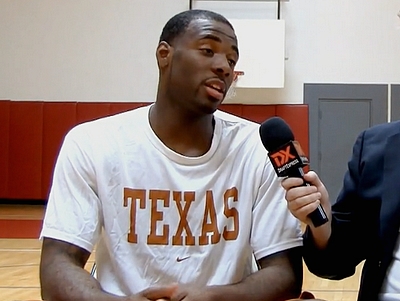 When we stopped in to see Damion James work out in Los Angeles a few weeks back, it was his second day in the gym working with trainer Don MacLean, but you couldnt tell by the way he performed in the session. A consummate team player with an excellent work ethic in his four years at Texas, James maturity was quickly evident in this setting, as he was extremely attentive to everything McLean said, absorbing all the information and quickly adapting to adjustments on the court.

Running a series of shooting drills and three-on-three scrimmages with Jordan Crawford, Paul George, Luke Harangody, Nick Young, and Frank Robinson, James stood out in a variety of ways, though his high energy level played a part in all of them.

Offensively, James showed great variety in how he was capable of scoring in the scrimmages, looking very comfortable operating in isolation situations, which were heavily featured for all players. Not the best advanced ball-handler in the world, James showed a very good grasp of ball fakes and jab steps, and with his excellent length (71 wingspan), he has little trouble getting separation for his shot when pulling up.

James also showed some nice flashes when attacking the basket, doing a good job of finishing through contact at the rim. He doesnt have the greatest first step, but his size, length, and strength allow him to create good shot opportunities even when he cant get past his mans hip.

James jumper was going in at an outstanding rate the day we saw him, both in pull-up and catch-and-shoot situations. He showed very good release speed on spot-up opportunities, and clearly has a good understanding of floor spacing, constantly moving without the ball to places where his teammates can find him for an open look.

Defensively, James was similarly impressive, looking comfortable defending on the perimeter, especially in pick-and-roll situations, where he showed excellent awareness. James lateral foot speed isnt elite and his hips are a bit high, but he does an excellent job of bodying up and using his physicality to make up for it, showing an excellent level of effort and focus here.

Looking forward, James stock remains somewhere in the middle of the first round, where its been since the NCAA season ended. Given his high levels of work ethic, coachability, and maturity, he is certainly someone who could impress in private workouts and interviews, and he definitely appears to be the type of player a coach will want on his team. Questions about his ideal position at the next level and if he has a stand-out skill still remain, but his versatility and toughness are certainly factors working in his favor.
Read Next...