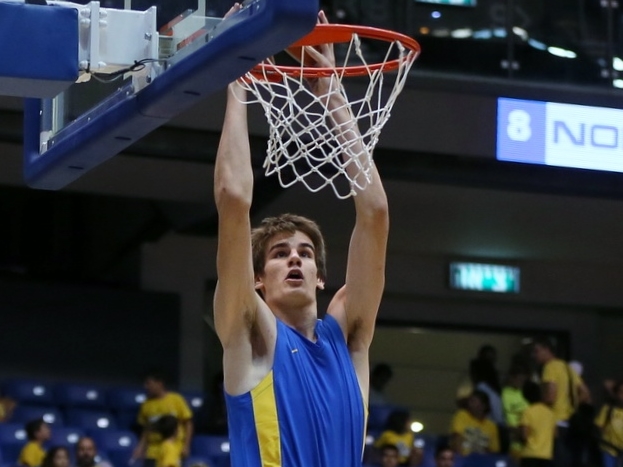 On the USA Experience:

It's really great to be with this team here in the US. To be playing in these games with this crowd against these players is really great. And it's helpful for me. It's really exciting to get a lot of experience.

On playing two games in the US:

It was great. I was here one time before in an All-Star game but this was the first time playing on this court. To play in front of the Maccabi crowd was amazing.

On actually getting minutes:

It was good to play here and all the minutes and everything are great for me. I'm getting better for sure every day. I'm excited to start the season.

On where he's from:

I'm from Split. I'm from Croatia but born in Herzegovina.

Israel has been great. This is my second year over there. It's really great. I love it. I love Tel Aviv and I'm loving life over there.

On advice he's received from teammates with NBA experience:

[Farmar and Favareni] are great. They give great advice on and off the court. They're telling me what to do and what not to do. They've definitely been helping. It's great to have them.

On whether he was aware of the NBA attention:

I did know [that GMs and Scouts would be watching] but honestly, when I step on the court I really do not think about it. I'm trying to focus on the game and try to focus on the things we hear in the locker room and translate it to the court.

On his regimen this summer:

This summer, I was off of the national team so I came home to Split and I tried to do a lot (of work) on the physical part and also on the shooting part because these two things are going to help me get minutes on the court. I tried to improve my defense with all the rotations. On the ball, off the ball. It's good, [the summer] helped me a lot so I'm looking forward to starting a new season.

On players he models his game after:

When I was a kid I was trying to look like Toni Kukoc, trying to play like him. But now that he's retired and everything, I'm watching the guys in the NBA like Dirk Nowitzki and Nikola Mirotic. Dirk is a famous NBA player and he's playing like a stretch-four like me. Like I want to. Mirotic came last year to the NBA so I try to look at how he adjusted to the league.

On how he felt about his performance in the US:

I'm happy (with my performance in the US). We did some good jobs preparing for the new season. Of course we have some things we have to improve on both ends of the floor. We're looking forward to starting our season in Europe and these pre-games are preparation. We are on the right road. It is going to be good this season. We have a great team and great players.

On what he's working on specifically:

I'm trying to be a complete player. To play outside or inside. Whatever the coach needs me to play. But I like to play a little face up from the three point line or from my back to the basket. In Croatia, some coaches see the talent in the player willing to play with the ball from the outside.

For (position) doesn't really matter. I'm comfortable with both positions and whatever coach needs me to do in the game and in the time on the court. Right now I feel more comfortable at the four because I'm really tall and defense for me is easier to guard bigger guys than smaller guards. But again for me it's not a big problem to play both positions.

I'm trying to build up muscle but also not to lose speed or agility, for sure. I'm going step by step, really. We did a great job this summer. It's really great. Also, the nutrition program is really great. I'm doing everything from the program to build muscle from the legs to the tops, it's been great so far.

I played against [Kristaps Porzingis] one time in a Euroleague tournament for juniors in Barcelona. I loved to look at him play. I really didn't look at his games too much. I saw that he was really high in the draft and I think he's going to be good in the NBA, for sure.

I'm definitely trying to improve my left hand. I'm trying to improve all of the things to become a complete player. I do all the kind of drills with the chairs and everything. The 101 drills, they've been great.
Read Next...