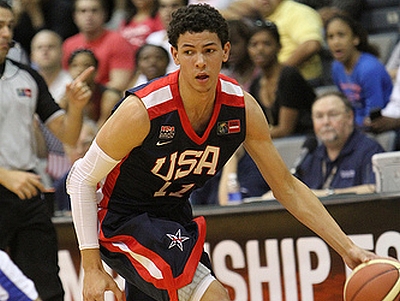 Jonathan Givony
@DraftExpress
With the FIBA Americas U-18 Championship completed in San Antonio, we finish up with a look at the top prospects seen amongst the USA basketball team.

The leading scorer (with an astounding 101 points in 115 minutes) and MVP of this tournament, Austin Rivers was an absolutely devastating presence on the offensive end for this USA basketball squad.

Rivers has average size for a shooting guard, at around 6-4, and will need to continue to work on his frame down the road. He's an exceptionally fluid athlete, though. He has a great first step, terrific shiftiness off the dribble and amazing scoring instincts for a player his age.

Rivers is a multi-faceted offensive threat who is capable of creating his own shot in the half-court and being a deadly shooter from beyond the arc. He's equally adept at making shots with his feet set or off the dribble, showing interesting mechanics that are extremely consistent but also slow down the speed of his release somewhat. He's capable of absolutely exploding at any given moment, though, as he showed in the semifinals when he made an unbelievable nine 3-pointers in a row (a USA Basketball record), five of which came in the first quarter alone.

Rivers is more than just a shooter. He has an excellent crossover and is extremely creative when finishing around the basket, using pretty floaters and reverse moves to score with the greatest of ease. He puts tremendous pressure on the defense and is as aggressive and confident a scorer as you'll find at the high school level.

He's billed as being something of a point guard, but we've yet to see much of that from Rivers in the half dozen times we've evaluated him thus far. He thinks shoot first and is clearly most comfortable in a go-to scoring role, preferably one where he can take any shot he wants.

Rivers' shot selection can be poor at times, and his body language often leaves something to be desired. He noticeably pouts at the first sign of adversitywhether it's the referee making a call against him, a few missed shots in a row or a teammate refusing to pass him the balland he doesn't appear to be the easiest guy to play with. Part of this can likely be chalked up to immaturityas you often see in 17-year-old star playersbut his case seems to be a bit more extreme than usual.

Defensively, Rivers' talent level and feel for the game translate well, even if he doesn't always feel inclined to show it. He makes good reads rotating in the half-court and seems to have strong anticipation skills coming up with steals and rebounds, although he does tend to gamble.

Rivers' scoring instincts and athleticism have elevated him to the top of his class amongst the high school recruiting services and there is no question that his talent level warrants that spot. Having already committed to Florida (and then recently reneging), he's one of the most coveted prospects in his class, with Duke rumored to be the favorites.

The main post presence of this USA basketball squad, Patric Young confirmed much of what we wrote about him a few months ago at the McDonald's All-American game and even showed a few more wrinkles to his game.

He's still the same exceptionally gifted big man from a physical standpoint. He has a chiseled frame and excellent athleticism, making him a significant presence on the offensive glass and on the defensive end. He showed more flashes offensively than we thought he would, though, executing some interesting post moves, knocking down a mid-range jumper, passing intelligently out of double teams and finishing extremely well through contact.

It will be interesting to see how this translates next season when he plays for Florida. He's looking more and more like a top prospect at this point, especially when taking into consideration his rock-solid intangibles.

Irving's terrific talent was on full display at this tournament. After watching him in this setting, there's little doubt he's going to have an immediate impact for Coach K at Duke, even though his role might be smaller than some of the other heralded freshman.

Irving has a great body and good size at 6-2. Offensively, he's as skilled and versatile as you can expect from a player his age. He's a very good athlete who can get to the basket in a variety of ways and is particularly effective in the pick-and-roll.

Irving has a nice stroke from the perimeter and made a number of shots from outside (both with his feet set and off the dribble) over the course of the week. Perhaps most impressive is the way he competes on the defensive end, though. He takes great pride in his work on this end of the floor, showing great fundamentals, a high effort level and terrific smarts. He gets right up in his man's grill and locks him down. Even when his team was up by a huge margin, he was still out there getting after it on every possessionhe even attempted to take charges.

Vander Blue is a player we hadn't had the chance to evaluate at the high school level but came away extremely impressed with at the FIBA Americas tournament.

He's got good size for either backcourt position with a terrific body and exceptional athleticism, which he has no problem putting to full use on both ends of the floor. Blue's role on this team was primarily defensive stopper, something that he seemed to relish. He was the point man on Team USA's full-court press, getting right into his defender with his long wingspan and terrific lateral quickness, and he caused plenty of turnovers.

Offensively, we'll have to wait until next season to get a full read on Blue's potential because of how loaded this team was with scorers, but he showed solid ball-handling skills and made a couple of very good passes, particularly in transition. His shot may be a bit on the streaky side, but he didn't really take enough of them to judge. Blue's athleticism is a real asset in the open court, as he's fast with the ball and extremely explosive around the rim. He'll be an immediate contributor at Marquette next season.

6-8 small forward Quincy Miller did a nice job showcasing his talent at the tournament. He looks far more like a true wing player than the face-up power forward he's often listed as. A good, but not incredible athlete, Miller is a highly skilled player with terrific fluidity and excellent body control.

Offensively, Miller likes to create his own shot from the perimeter, where he shows outstanding ball-handling skills considering his age. He's very aggressive taking his man off the dribble and is a significant threat in isolation situations. Miller can also make shots from the perimeter, showing nice touch to compensate for his strange mechanics. He shoots the ball in front of his chest and thus struggles to get good looks off when crowded. This is something he'll need to work on if he's to reach his full potential as a scorer.

Defensively, Miller has all the tools to be excellent, but he doesn't always apply himself, especially when it comes to crashing the glass. That wasn't that much of an issue at this tournament, but it is something we noticed in the past. When motivated, Miller's length, athleticism and instincts make him a significant presence.

There is some talk that Miller will be ranked as the No. 1 prospect in his high school class by the time his senior year is up. He clearly has the potential to warrant that kind of praise, but at the same time he also has plenty of work ahead of him.

The Swiss army knife of this USA basketball team, Richmond played a number of different positions and roles over the course of the week, showing off his excellent physical tools and versatility in the process.

Richmond is first and foremost a superb athlete. He's absolutely electric in the open floor, and he looks incredibly fast and explosive getting off his feet. He gets plenty of points for that reason in transition and off of offensive rebounds, showing a real nose for the ball when it's on the glass.

Richmond's excellent size, length and athleticism give him an unlimited ceiling in terms of his defensive potential. He made some fantastic plays on this end for the USA squad, especially in their full-court press. Offensively, he showed flashes of ability in terms of ball-handling skills and perimeter shooting, but he is far from reaching his full potential in this area. He demonstrates average fundamentals and smarts. He's got plenty of time to work on that part of his game, though, and he will be a highly coveted NBA prospect once he does.

Abdul Gaddy was somewhat of a disappointment considering he's the lone player on the team with actual college basketball experience. He blended into the background and took a back seat to his far more talented guard counterparts from the high school ranks, seeing only four minutes in the final game.

Gaddy has nice size and a good frame, but he just isn't athletic enough to make his presence felt at this level. He struggles to turn the corner, rarely gets to the basket and usually uses the pick-and-roll to set up mid-range jumpers. Gaddy doesn't push the ball in transition. He looks hesitant and lacks creativity in the half-court, instead looking content to make solid plays.

Gaddy does run a team pretty effectively. He moves the ball around on the perimeter in fundamental fashion and finds the open man unselfishly. He can make shots from the perimeter and looks competitive on the defensive end.
Read Next...