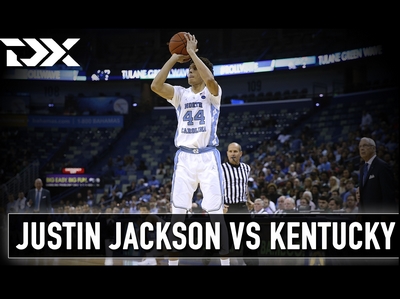 The 6'8 junior had arguably his best game at the college level, finishing with a very strong 34 points, 5 rebounds and 3 assists in 36 minutes, shooting 10-17 from the field and 10-15 from the free throw line.

Jackson is shooting 37% from beyond the arc on the season, correcting one of his biggest impediments preventing his NBA draft stock from taking off his first two seasons in college, where he shot just 29% for 3.

His numbers are up across the board on the year in fact, as he's posting a career high 21 points per-40 on the season, while his rebounding, 2P%, free throw attempts, free throw percentage and PER have all improved.

While North Carolina lost this game 103-100, the fact that Jackson was able to step up and have perhaps the best performance of his college career against this type of competition certainly bodes well for his prospects.