Roundup: The Rubio Show Marches On 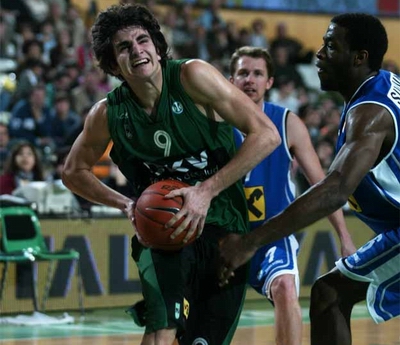 Luis Fernández
@DraftExpress
We had quite a few excellent performances this week, and even if many could have gotten the nod here (especially Nicolas Batum), we ended up picking Ricky Rubio as our Player of the Week for his outstanding exhibition in the last round of the ACB League. It was the first time this season that Lagun Aro Bilbao lost at home, and it was DKV Joventut, led by Rubio, the team getting it done. The Rubio Show marches on while he ranks fourth in efficiency in the ACB League. We also take a look at Omri Casspi, who is lately gaining importance for Maccabi in the Euroleague.

Player of the Week: Ricky Rubio

Rubio has netted yet another Player of the Week award with his amazing game against Lagun Aro Bilbao. The best point guard in the ACB League (youve read right, hes already the best and its not even close) just delivered another lesson about how to play this game. Hes everyday a better playmaker, more creative for his team, as well as for himself-- more able to invigorate the offensive flow, by taking controlled risks to disrupt the opponents defense in order to facilitate the scoring production for his team.

Rubio produced 18 points and 9 assists that nicely reflect his offensive efforts, rounded out with 5 rebounds and 2 steals. His efficiency production (a stat similar to the NBAs EFF) is off the charts, ranking fourth in the ACB League overall, falling only behind the 1985-born standouts Marc Gasol, Rudy Fernández and Tiago Splitter (again, props for the teams selecting these three guys in the past draft).

Incisive as always, the personal foul is the only resource his opponents enjoy in order to prevent him from stepping into the lane, and hes not even trying that hard on a regular basis. His potential in this regard is monstrous, and if Rudy leaves the team this upcoming summer, expect Rubio to emerge more aggressive and completely fearless to take over the offensive initiative. His jumper continues to remain steady, and even if he lacks elevation (something in which he should definitely work on), he shows some off-the-dribble shooting ability as well.

3000[c]Penya.com[/c]
Against Bilbao, Ricky particularly shined dishing the ball. He put on a passing clinic that included transition passes in traffic, drive and dish plays (a typical pass for him is to drive all the way under the rim and them hand the ball back to a teammate from behind his defender), deliveries from the perimeter finding his teammates under the rim, while cutting or open to release a jumper. He enjoys that perfect timing to known when its the right moment to send the ball.

Super smart, part of Rubios game relies on anticipation. He has that knack to foresee whats going to happen on the court. Thats why his decision making looks so great, thats why he finds his teammates so easily, and it particularly explains his ridiculous ability to steal the ball. Its interesting to describe the two steals he collected in this game. The first one is a classic move he delivers, unexpectedly attacking the passing lane from the weak side (that is, going between the opponent and the sideline to intercept the ball the instant before it reaches its destination). It usually comes when his match-up is cutting towards the perimeter, or in defensive rotations working off the visual angle of his opponent. The second steal came to him in the form of a loose ball that his superb hands just lodged free against two opponents. The slightest touch with the ball for him means establishing control and deciding where to send it.

His defense itself often works on anticipation, as his lateral quickness, even if very solid, still might lack that last degree of explosiveness that he will likely gain as he keeps maturing physically (although he already shows a pretty good frame).

I have to be honest: I never liked the idea of having Ricky Rubio in the first spot of the 2009 mock draft. Indeed I still firmly think that he wont go there once everything is said and done (hes a point guard after all, and not that incredibly athletic). But everyday that looks like less of an impossible outcome, and I hardly doubt that anybody else can claim that predicted spot as much as him at this point (regardless of the fact that his contract will likely prevent him for declaring for that particular draft).

A Look at Omri Casspi

Its been a troubled season both for Maccabi Tel Aviv (coach Kattash fired and way too many losses in the domestic front, the last one right this past weekend at home to Bnei HaSharon) and also for Omri Casspi. The brightest Israeli promise has struggled to get playing time in Tel Aviv, which seems pretty logical if we consider that Maccabi is a true European powerhouse. However, hes just coming off his longest court-tenure in the Euroleague this season, precisely in a crucial victory against Real Madrid in the Top-16 stage that allowed Maccabi to clinch the first position in its group. Casspi stayed in the game for 24 minutes, and finished with 10 points, 4 rebounds, 3 assists and 2 steals.

A legit 6-9 combo forward, coach Sherf used him mostly as a small forward, but Omri often officiates as a power forward as well, as he proved in his previous outing against Hapoel Gilboa/Afula (scoring 20 points off the bench, by the way). Hes long, hes well built and hes also quick for his size. Actually, the biggest concerns about his ability to play small forward come from the defensive end, but hes showing a bit better lateral quickness and aggressiveness, staying closer to the ball (he used to rely more on his length to defend perimeter guys, conceding them too much space in order to prevent them from slashing past him). This is one of the main areas that coach Sherf has been helping him out the most actually, and he wouldnt be able to get minutes for the old-school conservative coach if he wasnt producing for him on this end.

Offensively were seeing mostly a face-up player, very incisive with the ball in his hands, but also active playing off the ball. Casspi enjoys nice ball-handling skills, a solid first step, and excellent footwork. He can attack both ways, and uses his body really well to work his way towards the basket. Hes an aggressive player with great body control, who doesnt fear contact at all. Against Real Madrid, he beat one of the best perimeter defenders in the Old Continent, Charles Smith, off the dribble, attacking him in a pure one-on-one situation with his left hand. Without the ball, Casspi actively cuts, often in back-door fashion, delivering mostly moves towards the basket. Following this trend (of activity without the ball and getting near the rim), he also emerges willing to clean the offensive boards looking for second-chance points, always trying to cash in off his superior size.

His shot isnt emerging as his best weapon at this point. Hes not looking very prolific or particularly effective. Casspi basically settles for spot-up three-pointers that hes not connecting on consistently. Confidence is an issue, but his the necessity to remain as efficient as possible in his overall game in order to receive playing time probably gets the upper hand here. For the moment, Casspi is sticking to his strengths, which means no wild off-the-dribble shots that we used to see him delivering in youth categories. Anyway, he is better off starting the build the house from the foundations up first, and work hard on his jumper to gain accuracy in those open treys that will allow him to keep defenses honest in the future.

As for the rest of his game, we should mention his devotion for the transition game (he loves to run the court, and eventually even while dribbling the ball) and the nice passing game hes showing, feeding the low post or recognizing cutters to pass to; nothing really outstanding, but nice stuff to round out his game.

In case anybody is still wondering, Casspi is still a very legit NBA prospect: the guy very talented, really competitive, and enjoys an intriguing physical profile. He needs to keep working on his game, on his defense and shooting stroke, continue being serious on the floor, and stay patient with both his playing time in Maccabi and a hypothetical desire of rushing an American adventure.

Nicolas Batum came back extremely strong right the same week we had featured him in the Whos Not section. With 21 points, a career-high 12 rebounds (seven of them offensive!), 3 assists, 3 steals and 3 blocks, he delivered a monster game while leading Le Mans to a one-point thrilling road victory over Le Havre.

Nando De Colo is the definition of hot at this moment: he averages 20.2 points in the last eight games, including the French Cup and the FIBA EuroCup, having established almost a perennial presence in this section. This last weekend he hit again with 21, while adding 4 rebounds, 7 assists and 4 steals to lead Cholet on the road over Hyeres-Toulon.

Tadija Dragicevic added two more 20 point plus performances this past week, already totaling 18 times so far this season when it comes to reach that scoring mark, while failing to reach double digits only three times, which speak volumes about his scoring consistency. His first outing came in the ULEB Cup as his team sealed its pass to the Top-16 round with their second victory over Benetton Treviso, this time on the road by just one point. Dragicevic had 24 points, 7 rebounds and 2 steals. Back on the Balkan front, Red Star was upset at home by FMP, as Tadija contributed 20 points and 3 rebounds.

Martynas Gecevicius erupted for a career-high 28 points in the BBL. Still not granted with regular playing time in the Euroleague with Lietuvos Rytas, the Lithuanian sniper does get opportunities to showcase his stuff in the Baltic competitions. This time they faced Tartu Rock, which ended as an easy victory for Rytas, with Martynas as the teams leading scorer while contributing 2 rebounds and 3 assists. Gecevicius is probably the purest young shooter in Europe, showing amazing mechanics, with arguably the only possible competition coming from the U-19 World Champion Mladen Jeremic (if we stick to decent competition level).

Artur Urazmanov arrived to Latvia in November looking for playing time in a decent competition level with a mid-sized team such as Ventspils, but so far he has completely failed to achieve that goal. Hes yet to reach the 10-minute mark in the BBL, averaging an extremely poor 1.6 points and 0.2 assists. From the limited footage weve been able to gather on him this season (not that theres much to pick from), Artur doesnt look confident enough on the court to put in practice his game style, as hes not attacking his opponents at all, which is his best attribute. Of course, for a 6-1 guy its not the same to operate in the lane against youth competition as it is against veterans, and already he had struggled in the U-20 category. Not a notable shooter or distributor, while showing his limitations with his left hand, not the smartest point guard around, and neither playing great defense, theres not much he can offer for the moment if he doesnt try to be more aggressive (indeed, his sole assist after 24 minutes played in the whole BBL season came off a penetration).
Read Next...