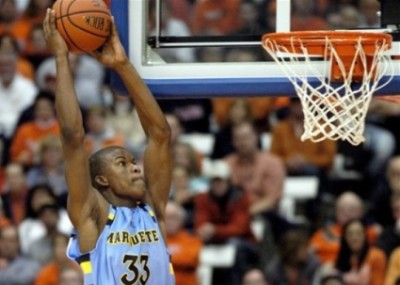 An unheralded high school player, Jimmy Butler landed at Marquette after spending a year of his eligibility at Tyler Junior College. Glued to the bench and struggling to produce early in his career behind the likes of Dominic James, Jerel McNeal and Wesley Matthews as a sophomore, Butler showed great competitiveness and emerged as exceptional complement to Lazar Hayward last season. Though Darius Johnson-Odom seems poised for a big year, Marquette's success in 2011 will be influenced just as much, if not more, by the play of Jimmy Butler. Arguably the most efficient offensive wing in the NCAA last season, if Butler takes another large step forward he could garner some NBA attention.

Butler's has two major obstacles in emerging as a high-level draft prospect. First, he is not a tremendous physical specimen. Built similarly to former Memphis prospect Shawne Williams, Butler is very smooth on the court, using rangy strides to get to the rim. However, he lacks explosiveness, a strong frame, and great lateral quickness. Butler does have a long wingspan and good size for a small forward, the position he's projected to play in the NBA, but scouts will put his athleticism under the microscope as he faces NBA caliber athletes virtually every night in Big East play.

The second obstacle Butler faces in proving his mettle as a prospect revolves around the roles he's played offensively. Spending some time out on the perimeter where he showed remarkable progress as a junior, Butler spent a large portion of his minutes as a sophomore acting as the de facto power forward when injuries plagued Marquette's undersized lineup, getting almost half of his touches off of cuts and offensive rebounds. Endearing himself to Williams with his play defensively, efficiency crashing the glass, and knack for finishing opportunities his teammates created for him, Butler branched out considerably last season, but could still use more touches out on the wing to continue refining his budding perimeter game. With Lazar Hayward out of the picture, this could be Butler's first season as a high-usage threat, and his ability to maintain his efficiency with more touches is worth keeping an eye on.

The diversification of Butler's offensive arsenal made the difference for him last season and promises good things this year, as his development has given Buzz Williams the flexibility to use him in a multitude of ways on the offensive end. As a sophomore surrounded by NBA prospects, Butler attempted just 18 jump shots, knocking down just 4 of them. After a summer of hard work with Lazar Hayward, Butler made half of his 38 catch and shoot attempts last year and connected on 40.3% of his 2.1 jumpers per-game overall. Displaying an exceptionally high release and emerging as a capable threat pulling up off the dribble, Butler has a very solid shot selection, has learned to hit the corner three, is able to exploit mismatches, plays within his skill set, and could have an outstanding year if his jump shot continues to improve.

Butler's development last season, coupled with his solid basketball IQ and functional, albeit simple ball-handling repertoire allowed him to score effectively in both spot-up and isolation situations last season while not turning the ball over at a high rate. Though Butler's jumper gives him intrigue as a prospect, his ability to get to the basket is what made him such a versatile threat last season. He isn't going to blow by anyone off the dribble, but he's developed his right hand to the point that he can take what defenders give him on the perimeter. He uses his body exceptionally well to shield the ball and exploits his rangy strides to create some good looks for himself around the rim.

Able to create easy looks by attacking in one-on-one situations, crashing the glass, or ducking in when his teammates penetrate, Butler shows a knack for capitalizing on his ability to be in the right place at the right time. A very solid finisher despite the fact that he gets his shots blocked by more athletic defenders on occasion, lacks great strength, and seldom plays above the rim, Butler shows good body-control and a good feel for using angles to make plays.

Defensively, Butler shows excellent discipline. Much like Lazar Hayward last season, Butler does an excellent job of staying in position and has excellent fundamentals, but doesn't have the lateral quickness to recover when he's beat. Unlike Hayward, who could use his strength to defend much bigger players in the paint, Butler's best asset is his wingspan. Though he does his best to prevent his man from getting position, his lack of great strength hurts him in the post, but he contests shots well and can make an impact in the passing lanes. His lack of leaping ability limits him as a rebounder, but he gives ample effort cleaning the glass.

Though there is a ton to like about Butler on the college level, he has some work to do on his NBA draft stock. His physical limitations will make his play this season that much more important to his pro-prospects, but if he's able to become a high caliber shooting threat and more dynamic in one-on-one situations, he could garner some attention. A strong candidate for the Portsmouth Invitational Tournament, Butler's transition from roleplayer to potential first option will be one to keep an eye on, as he could make a splash if he remains as efficient as he has been.

Having profiled Siva before his freshman season, we've decided to reassess what type of progress he's made in a few months rather than scrutinizing his development with a small sample of game footage.

Having profiled Coombs-McDaniel before his freshman season, we've decided to reassess what type of progress he's made in a few months rather than scrutinizing his development with a small sample of game footage.

At this point, Thompson appears to be a prospect who is likely another season away from breaking out and making more of a name for himself. He fits the mold physically for an NBA wing prospect though, and if he continues to expand on his dribble game and shoot with the accuracy he did last season, he is definitely worthy of keeping an eye on as a prospect for the future.

After steadily improving his production and efficiency numbers through all of his first three seasons in college, Corey Fisher will finally have the opportunity to be the lead guard for Villanova as a senior with Scottie Reynolds finally out of the picture. Fisher should have ample opportunity to increase both his scoring and distributing roles this year, and how he handles both should be crucial to his stock.

Since we last profiled Fisher two years ago, he's done a good job improving on his decision-making and shot selection, though neither is what would be classified as strengths still. He's prone to settling for ill-advised pull-up jumpers with a hand in his face, while he also tends to show tunnel vision on some dribble penetration opportunities, forcing the issue with the ball.

On the positive side, Fisher is a deadly shooter when spotting up or pulling up in space, showing range to the NBA three-point line and very good form when he has space. Things break down for his shot considerably when he's pulling up from isolation situations, however, as he tends to go off balance and not contain his momentum well. Given Villanova's guard-heavy, isolation-based offense, this is something Fisher gets into trouble with a decent amount, and it will be interesting to see how he adjusts this year when he's forced to shoulder even more of the shot creation burden.

In terms of attacking the basket, Fisher shows a nice first step with the ball and a very good top speed, something that is best on display in transition. In the halfcourt he has problems finishing at the rim, though he makes up for it by drawing contact well to get to the line and by relying heavily on a developing mid-range game, frequently going to runners and floaters in the lane. His accuracy needs to improve on these shots, but it's good he's adapting to that style of play now, as it will be necessary for him to have in his arsenal to make it in the NBA.

As a distributor, Fisher shows nice flashes at times, excelling mostly on simple drive-and-kicks where he displays good court vision when he wants to, while also doing a good job pushing the ball with his speed in transition. He definitely is still a shoot-first player, prone to tunnel vision at times forcing his own shot, but with his backcourt mate Scottie Reynolds no longer in the picture, it will be interesting to see how he adapts this season, needing to handle more ball distributing himself.

Defensively, Fisher is a pesky player with a strong motor and good fundamentals. He possesses good size and lateral quickness for the point guard position while playing with an aggressive mentality on and off the ball. He does a good job with positioning off the ball, staying between his man and the ball, and does a good job getting his hands up to contest both in isolations and rotating over.

Looking forward, Fisher's spot-up shooting ability, speed with the ball, and defensive tenacity are all attractive qualities from an NBA perspective, but he will likely need to prove this season he can run an offense on his own, something he should have every opportunity to do. Continuing to improve his shot selection, mid-range game, and overall point guard skills should be his top priorities.
Read Next...