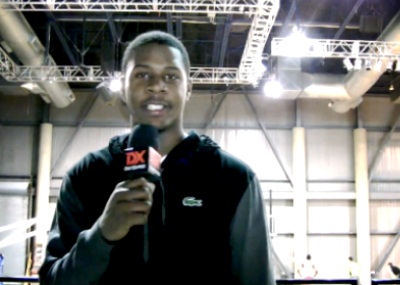 Richard Walker
@DraftExpress
Wrapping up the coverage of our stop at Impact Basketball in Las Vegas, where there were nearly 30 potential draftees preparing themselves for the next level, we check in on the progress of Josh Selby and Malcolm Lee.

At Impact, Joe Abunassar and his staff put each player through extensive workouts both on the court and in the weight room, five to six days per week, keeping them on an all-encompassing nutrition plan, and unlike many other training centers, have the ability to hold full five-on-five games on a daily basis.

In the final installment of our three part series on prospects working out at Impact, we'll take a look at two of the more intriguing long-term prospects in attendance, Josh Selby and Malcolm Lee.

Arguably the most explosive prospect among players training at Joe Abunassar's Impact Basketball, Josh Selby stood out with his ability to score the ball in one-on-one situations and with his athleticism. He reminding us of what we liked so much about Selby from watching him at the high school level, which is a welcome sign after the disappointing season he had.

After an up-and-down year at Kansas that began with a nine game suspension and was hampered by a nagging foot injury, Selby has been working out at Impact since deciding to forego his final three seasons of eligibility. One of the least experienced players in this draft, Selby is also one of the more vocal prospects we came across in in Las Vegas. Selby isn't a trash-talker, but was regularly communicating with his teammates in the three-on-three games and reaching out to his coaches for feedbackand has also been praised by NBA teams for the way he's conducted himself in interview sessions.

Since arriving at Impact, Selby has been working to improve the polish on his perimeter repertoire. Taking a backseat to the Morris twins at Kansas, Selby wasn't able to showcase his strengths in the NCAA as well as he was able to in three-on-three play in Las Vegas. Few players in this class are as explosive as the Baltimore product, and his ability to hit shots from the perimeter or use his first step to get to the rim presented a problem for the more experienced players in attendance when they were forced to guard him one-on-one.

Selby did lose the ball in traffic on occasion, and he's still working on his decision-making from the midrange and point guard skills, but it was hard not to be impressed with the raw tools and natural scoring ability he brings to the table. Considering he shot 37.3% from the field as freshman, there is going to be an inevitable adjustment period for Selby at the next level, but the 6'3 guard has as high a ceiling as nearly any player projected in his draft range.

One of the more interesting early entry candidates in this year's draft class among the combo guard prospects, Malcolm Lee showed some promising signs in Las Vegas for a player who had only been cleared to play a few days before we saw due to a minor knee surgery.

The first thing that jumped out to us was how much smoother his shooting mechanics appeared to be. He's not pulling the ball back as far before his release as he did as a Bruin and looked extremely confident from the perimeter in the sessions we watched. He's made significant progress in his shooting mechanics since arriving at UCLA, and has been focusing on maximizing his ability to create shots off the dribble at Impact as you'll see in his workout video.

In one session, we got to see Lee work out with Kawhi Leonard and Alec Burks under the tutelage of Chauncey Billups. Of the three prospects involved, Lee had the most impressive footwork. He's still improving the consistency of his shot, but he looked comfortable staying on balance and knocking down his jumpers while fine-tuning the aggressive scoring moves Billups implemented in drills. His recent surgery didn't seem to be hindering him either, as he was finishing comfortably above the rim when the drills called for him to explode to the basket.

In three-on-three play, Lee teamed with Ibrahima Thomas of Cincinnati and Jon Diebler to form the most imposing unit in the games we watched. Playing with a clear strategy, Lee looked comfortable using the pick and roll to create off the dribble and made the smart play when he couldn't get his own shot off, finding Thomas under the rim on a number of occasions and setting Diebler up for catch-and-shoot jumpers from the wing. When he looked for his shot, Lee did a nice job taking what the defense gave him, but didn't take too many jumpers because of the one shot and out rule the games were restricted by.

Though Lee was not overly productive in his there seasons at UCLA, it was hard not to be impressed by what he showed working out with two projected lottery picks. He did not appear out of place at all and it will be worth keeping an eye out for how he shoots the ball in private workouts. Considering the success of UCLA guards in the NBA recently, Lee is definitely a name to keep an eye on as we move towards draft day.
Read Next...