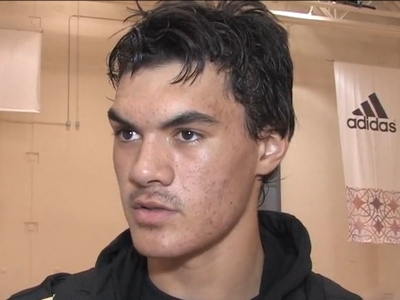 One of the most interesting players to emerge from the adidas Nations Experience was New Zealand big man Steven Adams, a complete unknown coming into this camp. The brother of Olympic shot put champion Valerie Kasanita Adams-Vili, he drew immediate attention with his terrific physical profile and continued to draw intrigue by leading the camp in rebounding (by a huge margin) and dropping impressive flashes of potential in every game he played in.

The first thing that stands out about Adams is his excellent frame. He has a body that looks more like that of a 25-year-old than someone just 16 years old. He's well proportioned, with long arms, huge hands, excellent lower body strength and wide shoulders that will fill out even more in time. He's a legit 6-10, if not 6-11, and should have no problem playing center in any league he goes to.

Adams is a very good athlete for his size. He's fluid and explosive, quick off his feet, and a big time leaper. He was clearly one of the most athletic guys at the camp--and this was against the very top players in America in his age group.

The thing that is most intriguing about Adams is that, despite only playing basketball for around four years now, he's actually fairly skilled. His touch around the basket is terrific and he can even face up from 15 feet and comfortably knock down mid-range jumpers, sometimes using the glass. He doesn't have much in the way of post moves, but he already shows a very nice jump hook. He also seems to have a knack for moving off the ball and presenting himself for easy finishes around the rim, something he did repeatedly throughout the week.

Adams does a great job setting bruising screens, then rolling purposefully to the rim. He has great hands, holds the ball up high and then immediately goes up for a dunk. It's obvious that whoever coached him did an excellent job because his fundamentals are pretty strong offensively. He is a poor free throw shooter at the moment, but that is something he can work on in time, especially when you consider the touch he has on his jumper.

Adams, as mentioned, led the tournament in rebounding at 11.3 boards per game--which was over three rebounds more than any other player in attendance. He was especially active on the offensive end, using a quicker initial bounce to beat out his opposition. He chases down every loose ball. And though he doesn't do much in the way of boxing out, he's just so much stronger, tougher and more athletic than his competition that he was usually the one to end up with the ball.

Defensively, Adams' potential is terrific. He's not a shot blocker, but he clearly will be a presence in the paint with his physical tools. He also looks nimble enough to step out to the perimeter to hedge screens and guard the pick-and-roll. He's also not afraid to throw his body around in the paint to make his presence felt, which is a great thing to have from a near 7-footer.

Adams doesn't have much of a concept of the fundamentals of team defense, but players his age rarely do, especially when they haven't played much high level basketball. He'll likely be foul prone early in his career, especially until he starts going up against other players his size, which is something he probably hasn't had a chance to do yet considering his background.

Another thing that stands out about Adams is how businesslike he is in his approach to the game. He plays at a nice pace and never looked out of control in Chicago. He doesn't have any misconceptions about the type of player he is. He appears to be extremely humble (as you can hear in the interview above), describing himself as being mostly a rebounder, an energy guy and a defender.

Adams is verbally committed to the University of Pittsburgh and, if cleared academically, will be a part of their 2012 recruiting class. He still has two years to continue to add polish and experience to his game, but he will need to find a way to test himself against bigger and stronger players than he'll find in his current home of Wellington if he wants to continue to progress as a player.

Edited by Patrick Crawley of Neon Tommy Sports and Basketball Fiend.
Read Next...