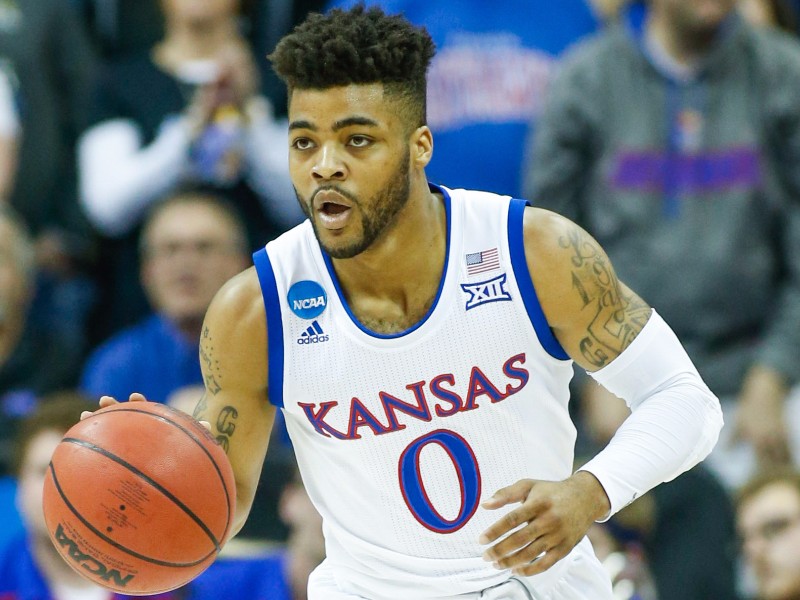 2017 Naismith College Basketball Player of the Year, Frank Mason III, was one of the winningest players in the NCAA during his four-year run at the University of Kansas. After seeing limited minutes as a freshman playing behind Naadir Tharpe, Mason grabbed the reigns to the starting point guard spot and led Kansas to three consecutive Big 12 regular season titles, while posting an overall record of 90 wins and just 19 losses.

The Petersburg, Virginia native thrived as the fearless and competitive leader of a Kansas program that ultimately fell short of its National Championship aspirations. Mason was a completely unheralded recruit out of Massanutten Military Academy, but after four years of winning basketball on the biggest stage in the country, he has worked himself firmly into the NBA Draft conversation. In a draft class that is overshadowed by one and done freshmen, Mason brings a unique winning pedigree and level of experience that most prospects these days don't have.

The biggest question mark surrounding Mason's transition to the NBA game is his size, which limits his ability to affect the game in multiple areas. Measuring just 6'0 in shoes at the 2017 NBA Combine, Mason is on the shorter end of the spectrum for NBA point guards, but he doesn't allow that to deter him from playing an ultra-aggressive and confident style of basketball. Weighing in at 189 pounds and measuring a 6'3.25 wingspan, he has a physically mature body and above average length, which he uses well to play through contact on both ends of the floor.

One of Mason's biggest assets is his pure speed and explosiveness which he uses to fearlessly get downhill and attack the rim. At the college level he was dominant using his end to end quickness to attack the basket in the open court and put pressure on the defense to sprint back in transition. His burst with the ball was also effective in the half court, where he's shown a powerful first step and the ability to change directions with force and attack his man off the dribble without a ball screen.

Mason's explosiveness and strength allow him to get into the paint, where he can finish with floaters or through contact. He attempted 7.3 free throws per 40 minutes, which is an impressive number for a player his size, and highlights the aggressive and physical brand of basketball that he plays. He has proven to be an explosive leaper (41 vertical at the 2017 NBA Combine), but his size limitations do show around the rim where he can struggle to finish vs elite length and athleticism. He managed to finish just 49% of his field goal attempts around the basket (per Synergy) which ranks in the 37th percentile among all college players.

The style of basketball that Mason plays projects him more as a change of pace, score first point guard, rather than as a facilitator. While he is more than capable of being a playmaker and averaged 5.7 assists per 40 minutes, he is typically looking to attack and score, which fits the mold of most modern-day NBA point guards. Mason's first instinct is generally to get to the rim, and while at times he shows vision on the move, he is susceptible to driving into traffic and missing open shooters once he has forced the defense to collapse.

He has shown some versatility playing out of pick and roll, mixing in a blend of both scoring and facilitating. He is comfortable stepping into a pocket jumper or turning the corner out of ball screens, but can still improve as a pick and roll playmaker. His size forces him to use creative angles as a passer, and if he misses hitting the big man on the pocket pass window, he has a difficult time passing over the top of the defense or seeing the weak side of the floor. His ability to get into the paint makes up for some of his deficiencies as a passer, but if defenses load up on him as a ball handler, he can have his difficulties seeing all sides of the floor.

Mason had always been a reliable outside shooter, but during his senior season he took his perimeter game to another level, shooting 47.1% from deep on 5.3 attempts, which is the highest percentage of any player in the 2017 DX Mock Draft (minimum one attempt per game). He is not going to create a ton of separation off the dribble and rise up from deep, but he excelled in catch and shoot situations, pulling up off the dribble in transition, or punishing teams for going under on ball screens. He has a quick catch and shoot stroke with nice elevation which should translate well to the NBA 3-point line. His much improved perimeter shooting should open up driving lanes for him as defenses are forced to guard him more aggressively outside the arc.

As dynamic as he is on the offensive end of the floor, he will have his limitations as a one on one defender. He is a strong and aggressive competitor who plays bigger than he is, but overall his size affects the impact he can have on the defensive end. He uses his strength well to take a hit and keep his chest in front of ball-handlers, but he allows bigger guards to rise up and shoot over him. He has quick hands and the strength to be a disruptive defender on the perimeter, but can have his difficulties stopping bigger guards attacking the rim. He is likely not going to be a dominant one on one defender at the NBA level, but if he maintains a high effort level he should be able to hold his own as a useful team defender.

Mason, who recently turned 23 at the end of April, is older than most prospects in this draft, but brings a wealth of winning and big game experience that most NBA rookies cannot compete with. He has his limitations from a physical standpoint, but he is a tough competitor who has shown a great deal of improvement throughout his four year career at the University of Kansas. Mason is a likely second round pick in the 2017 NBA Draft, but it would not be surprising to see him make a team and carve out a successful career.
Read Next...