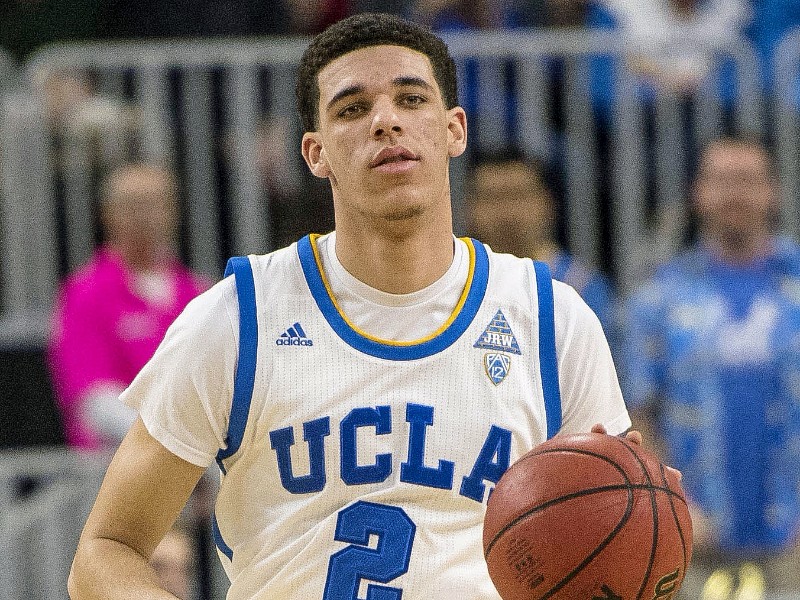 When Lonzo Ball arrived at UCLA last fall, he was looking to revive a program which had collapsed down the stretch the previous year. UCLA went just 6-12 in Pac-12 play in the season before Ball's arrival, and lost ten of their last 13 games to close out the 2015-16 campaign.

Armed by the arrival of Ball and fellow freshmen T.J. Leaf and Ike Anigbogu, UCLA would undergo one of the more dramatic turnarounds in recent memory. Propelled by Lonzo Ball's frenetic style of play and the best offense in the country, UCLA powered their way to a 31-5 record and a three seed in the NCAA tournament.

Ball averaged 14.6 points, 6.0 rebounds, 7.6 assists, and 1.8 steals per game on the season, gaudy numbers in their own right. When adjusted for pace, his 8.1 assists per 40 minutes ranked second among top-100 prospects in the DraftExpress database, with his 6.4 rebounds per 40 third among point guards. But Ball's impact went far beyond his own personal numbers as he almost single-handedly transformed an offense that ranked outside of the top-50 the previous season into one of, if not the, very best the country had to offer.

Ball stands 6'6" in shoes with a 6'9" wingspan, providing him with a number of unique advantages at the point guard spot. His frame isn't all that fleshed out, however, and his lack of physicality can hinder him in a number of areas as well.

When discussing the Lonzo Ball experience, it would be impossible not to start with his elite transition play. Ball his virtually the entire package in this regard, from his ability to force turnovers and grab defensive boards to ignite the break, the breakneck speed he operates at with the ball in his hands, his elite creativity and passing accuracy, and even right down to his knowledge of when to push the ball himself and when to give it up to his teammates. The ball doesn't stick, his decision making is quick, and his creativity and vision are nothing short of elite.

In all, transition opportunities accounted for nearly 30% of Ball's offensive possessions, per Synergy Sports Technology, where he maintained an outstanding 4.1-to-1 assist to turnover ratio.

In the half court, Ball is a little bit more of a mixed bag, with some pronounced strengths and weaknesses to his game. His bread and butter is still his amazing court vision and creativity. He has the size to see over the defense and find shooters in the corners, the vision and creativity to find big men rolling to the hoop, and the basketball IQ to make quality split-second decisions with more regularity than you would expect a 19-year-old to do. For a player who was such a focal point offensively and who generated so many scoring opportunities for his teammates, the ball didn't stick with Ball, allowing other players to serve as playmakers and encouraging constant movement from his teammates.

His biggest limiting factor at this stage is that he just doesn't show much ability to consistently get into the paint off the dribble, even at the college level. His first step isn't great, as his athleticism really begins to shine when he has the chance to build up steam in transition, and he doesn't have the strength needed to overcome that.

In fact, according to Synergy, Ball used just 33 possessions in isolation and used nearly 75% of his pick and roll possessions were as a passer, very infrequently using the pick to get into the paint and find his own offense. How limited he will be as a scorer in the half court is a legitimate concern for decision makers looking to build a team around him.

Ball sports a highly unusual shooting motion, albeit one he found quite a bit of success with this season. He connected on 41.2% of his 194 three-point attempts, many of them from far beyond NBA range. He was fairly consistent as a catch and shoot player, connecting on 44.6% of his catch and shoot shots, per Synergy, despite the fact that a majority of them came from three-point range and the fact that over 68% of them were contested.

In addition, Ball shows some comfort level shooting off the ball on the move, as he does a good job getting his feet underneath him when coming off of a screen. He also has a deadly step-back jumper, which is one of his go-to scoring options when he does look for his own shot off a pick and roll. The combination of his deep range and comfort with the step-back can be a tough guard for opposing defenses.

Where his awkward shooting mechanics can come into play is off the dribble. On the one hand, Ball connected on 48.6% of his jumpers off the dribble, yielding 1.343 points per shot, a number that was among the top figures in college basketball. The problem is those were very rare occurrences, as Synergy logged just 35 such attempts on the season, with the majority being step-back jumpers. Ball's low release point and need to come back across his body certainly seem to factor into his ability to get his jumper off when pulling up off the dribble, and he has almost no in-between game because of it.

One, perhaps unexpected, area where Ball contributes offensively is cutting off the ball, something he did more than most point guards because of the presence of Aaron Holiday sharing the backcourt frequently. Ball has a real knack for lulling his defender to sleep off the ball, then using hard backdoor cuts to create scoring opportunities. His athleticism comes to light in these instances, and he has the ability to rise up and throw down lobs with regularity.

48% of Ball's non-transition baskets at the rim were assisted, which highlights both his ability to move off the ball along with his struggles creating his own shot off the dribble.

This unique skill matrix for Ball could be somewhat interesting in some of the two point guard sets that have become more commonplace in the NBA. Having a second ball handler alongside Ball could really open up transition opportunities for a team. Then when things settle down into a half court set, Ball's ability to shoot off the catch and move off the ball, both in the form of cuts to the basket and shooting off screens, could allow him to function in half court sets even when he's not controlling the ball, and his ability to make quick, split-second decisions could punish a defense if they have to commit to helping on the primary action.

On the defensive side of the court, Ball does enough off the ball in terms of forcing turnovers and crashing the defensive glass to not be a total non-contributor, but he does have his weaknesses as well, and probably has neither the versatility or impact that his physical profile and steal/block output suggest. Ball struggles at times denying dribble penetration against quicker guards, and he can get absolutely blown up by screens, lacking both the awareness to recognize the screen and make the correct read while also struggling with the physicality to fight through the screen.

De'Aaron Fox and Kentucky attacked both of these weaknesses to devastating affect in their NCAA tournament victory, paving the way to a 39 point explosion from Fox. Beyond that, Ball struggles with having consistent focus and effort, something which his coach at the next level will have to work to correct.

Lonzo Ball is one of the more unique prospects to come out in some time. On the one hand, his strengths are legitimately elite, and fit in well with the modern pace and space NBA. Yet his weaknesses are pronounced enough that a team may have to construct their roster to help overcome them. Still, the overall package of skills is tantalizing and Ball separated himself as one of the best prospects in this upcoming draft, and looks to be one of the first names mentioned by Adam Silver on June 22nd.
Read Next...