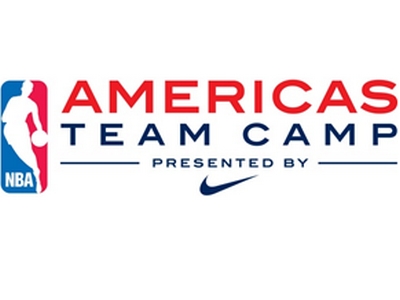 Julian Applebome
@jlapplebome
Below is a list of five of the top performers from the Americas Team Camp in Mexico City which finished on August 13th. The camp which was hosted by the NBA and led by the likes of Earl Watson, Jim Boylen, and Austin Ainge featured 40 of the top under-18 players from Argentina, Brazil, Canada, and Mexico. Team Canada defeated Mexico in the championship of the camp, and was led by Noah Kirkwood who won MVP, and Luguentz Dort who took home MVP of the camp All-Star game.

16-year-old guard Noah Kirkwood was the head of the snake for a Canadian team which took home the championship at the Americas Team Camp in Mexico City. Kirkwood took home MVP honors, and showcased a skill set which should have him recruited with high level Division I offers in two years when he closes out his High School career.

At 6'7, 213 pounds, Kirkwood already has the physical attributes to be a contributor at the next level, and while he is not the most explosive athlete, he has really good speed in the open court and a quick first step that he can use to get by defenders in the half court.

While in the half court he is mainly a dominant right hand straight line driver, he's fluid in the open court changing directions, something he showed with behind the back moves and advanced footwork on euro finishes in traffic. Given his size he projects as a wing at the next level, but he has the ball handling ability and vision to operate on the ball at times when called upon, which he was asked to do throughout the camp.

As effective as Kirkwood was a playmaker in this setting, he is more than capable of playing off the ball, and that is most likely where he will be slotted at the next level. He has a smooth and balanced shooting stroke with good rotation, but his release takes time to load up, something he'll need to adjust against better length and athleticism than he faced here. He also doesn't quite have the shiftiness or polish to create enough space off the bounce to get clean looks on his dribble jumper, which is fairly flat footed.

Where Kirkwood was really able to impact the game is on the defensive end of the floor. He's got the size and lateral quickness to guard multiple positions, and was able to take other guards out of their rhythm with his ball pressure. He's got solid instincts, and came up with numerous steals getting into the passing lanes, leading to easy buckets. Overall Kirkwood stood out at the Americas Team Camp because of his size and blend of guard skills. He is not elite in terms of his athletic ability, but he's a skilled 6'7 wing, with a high IQ, and plenty of room to continue to develop.

Lautaro Lopez capped off his busy summer with a strong showing at the Americas Team Camp, after competing at the FIBA U17 World Championship, the FIBA Americas U-18 Championship, and the Adidas Nations. The Argentinian guard was one of the more dynamic players in Mexico City, showing the ability to both score and create with ease. At 6'2 Lopez has decent size for the point guard position, but at 162 pounds his body is very much on the thin side, something that may hinder his long-term potential if he can't add weight to his frame.

Lopez is a quick and skilled guard, who can operate smoothly at different speeds and with change of directions. He is very comfortable playing out of ball screens, and is a creative passer, who can make difficult passes look easy.

Throughout his FIBA play this summer Lopez hadn't shot the ball consistently from deep, but that wasn't the case this week. He's got deep range, and a smooth stroke, and is more than capable of creating space off the bounce and scoring with one or two dribble jumpers. Lopez can break defenses down off the bounce, but has some limitations finishing around the rim. He has to get creative with floaters because he doesn't have the athletic ability or strength to finish consistently in traffic.

Lopez loves to push the pace and get out in the open court, but he plays with a certain level of confidence and flair that can sometimes come back to bite him. He's competitive on the defensive end, but his lack of strength is very apparent in his on ball defense, which is fairly lackluster. His lack of physical tools may be his biggest setback moving up in competition, but in this setting he certainly had the skills to compensate for it.

Given the physical tools that Dort has, he can be a factor on the defensive end of the floor. He has the size, quickness, and strength to guard multiple positions, and throughout the week he took on the challenge of checking the opposing team's best player. He's a physical defender who moves his feet well, will get into ball handlers, and for a guard has some rare shot blocking ability, and even came through with some highlight reel weak side blocks. Dort is an impressive physical prospect for his age, and is on track to be a high level college player.

Argentinean Point Guard Juan Ignacio Marcos may have been the breakout performer of the Americas Team Camp. Sharing the backcourt with Lautaro Lopez, Marcos was another skilled playmaking guard who kept defenses on their heels with his ability to score and create. Marcos is only 16 years old, and at 6'2 he projects much more as a point guard even though he can score the ball in a variety of ways. Similarly to Lopez, his frame is very much on the slight side, but at just 16 there is definitely room for growth. Marcos is a creative ball handler with a really good feel for the game, who can run the point guard position, but can also get into the paint and finish creatively. He is forced to finish creatively given his size, but he showed consistency with his floater, and can finish with his left hand as well. He's got knockdown catch and shoot ability, and is shifty enough with the ball in hands to create space off the bounce and knock in dribble jumpers. He has excellent speed in the open court, and is an unselfish player who looks to spread the ball around and make the extra pass.

Being only 16 years old, Marcos was playing up in competition, but he didn't look deterred, and played with a sense of confidence that was impressive for someone his age and size. He may have some physical limitations down the line, but he has an impressive skill set that he will continue to build on as he gets more experience playing at the international level.

At only 15 years old, Brazilian guard Pedro Barros Nunes was one of the most impressive young prospects in Mexico City. At 6'7, 192 bounds Nunes has advanced size and mobility for a kid his age, and has guard skills to compliment it. He spent a fair amount of the camp playing the point guard position, and while he has the ball handling ability and vision to do it, he projects more as a shooting guard or wing down the line. Nunes has a versatile skill set and looked comfortable playing in the pick and roll, but also can operate off the ball. He is not the most athletic player, but he is strong and quick, and has the handle to get by defenders in one on one situations. He has a good looking balanced stroke that keeps defenses honest on the catch and shoot, however he did not look as comfortable in dribble jumper scenarios. Nunes' versatility was apparent on the defensive end of the floor as well, guarding multiple positions, rebounding the ball, and getting on the floor for loose balls. He looked competitive and seemed to be the leader of his team, impressive for only being 15 years old. Nunes is already a part of the Joventut Badalona junior program in Spain where he will get a chance to develop against some high level competition outside of his home country of Brazil.
Read Next...