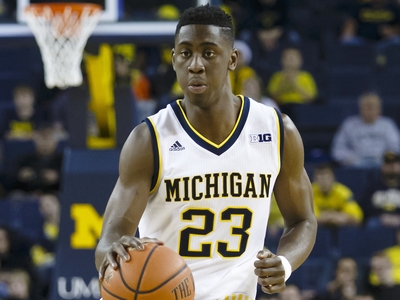 For the second straight season, Michigan's Caris LeVert had his season cut short by an injury. Last year, a broken left foot caused him to miss the final 14 games of his junior season, the same foot he had already had surgery on due to a stress fracture. Now as a senior, LeVert was diagnosed with a lower left leg injury (which Michigan claims is unrelated to his previous foot problems) that saw him play just 19 of his team's final 20 games, bringing his total games played in the past two seasons to 31, just 45% of possible games.

Although Michigan has been mysteriously secretive about what part of LeVert's left leg caused him to miss the final two months of the season, it's difficult not to connect the injury to his previous foot problems. LeVert, while once looking close to returning to action, ultimately decided to sit out the end of his senior season to mitigate the risk of any further injury. Somewhat encouragingly, he is openly discussing doing physical activity with NBA teams in coming months. Now he turns to the pre-draft process, including workouts and physicals, which will be crucial for him after missing so many games the past two seasons. Scouts and their organizations will have an adequate sample of games to evaluate him on, but will want up to date information and their medical staff's input after this latest injury.

LeVert's height, measured at 6'7, is his best physical asset and one of the main reasons NBA teams are excited about him. He has the potential to play anywhere from the point guard spot to the small forward position, but looks to fit best as a combo guard at the next level. His size allows him to shoot or pass over smaller defenders as he can easily see the floor.

The rest of his physical profile doesn't have any single overly impressive feature, but his overall package puts him on par with many NBA guards. He has a thin frame, and as a senior, it's difficult to see him adding too much more bulk to his frame, which leaves him vulnerable to be overpowered by bigger players, particularly defensively. He is a very fluid and mobile athlete when healthy, both getting up and down the floor and moving laterally, but he doesn't possess elite explosiveness, particularly finishing in traffic.

Although he is a senior, he is young for his class as he is the youngest senior in our top-100 rankings, and younger than a handful of juniors in our top 100.

Offensively, LeVert is a jack of all trades. It starts with his jumper, and he has developed into an excellent outside shooter over the past three years. He knocked down 40% of his three point attempts in his college career, and has a fluid stroke that shows he should be able to translate his performance to the NBA line. He converted 47.1% of his 34 total catch and shoot opportunities in his senior season according to Synergy Sports Technology.

Working off the dribble, he shows flashes of potential that could translate to the NBA but has never been able to develop this part of his game with any consistency. Lacking strength, aggressiveness and a consistent pull-up jumper, LeVert has never looked comfortable as a go-to guy creator that a team can rely upon in the half-court with the shot clock winding down. He can attack closeouts off the bounce and he has a nice first step that allows him to get by his defender into space, but has struggled to make shots off the dribble throughout his college career, converting just 62 of his 222 attempts (28%) over the past four years according to Synergy Sports Technology, a far cry from his blistering ability as a catch and shoot threat. This will be key for his development, as he isn't always strong or explosive enough to get into the paint, and will need to be able to make pull-ups if he's handling the ball in a combo guard role at the NBA level.

LeVert's quick first step does allow him to straight line drive to the rim when he has a clear path, but he isn't able to maneuver through a crowded lane off the dribble. He has a tendency to avoid contact around the rim, stopping short of the rim protectors to shoot a contested floater or attempting to avoid the defense altogether, which causes him to put up an off-balance shot attempt. Combining this with his inability to consistently shoot pull-up jumpers and he may struggle to create offense for himself at the next level, delegating him to more of a spot-up and secondary facilitator type role.

Where LeVert shows the potential to do more than just that is with passing ability. His 6.6 assists per 40 minutes pace adjusted ranked eighth among prospects in our top-100 rankings. He takes care of the ball, turning it over only 2.1 times per 40 minutes pace adjusted. He has shown nice vision to find his teammates off penetration and displayed good decision making to make the right decision to pass or shoot. Although he may not always be able to create good looks for himself, he should be able to find teammates if he can draw the help defense on his drives to boost his team's offense.

With his physical tools, it's difficult to project LeVert as a staunch defender at the next level. His height and wingspan could allow him to guard bigger guards, but his thin frame can get overpowered on drives or inside the paint. He may be able to bother smaller point guards but he isn't the quickest player laterally, which hurts his ability to stay in front of penetration at times. He'll need to work on staying in a fundamental stance defensively to maximize his chances of defending the perimeter. He does put in a high level of effort on this side of the ball and looks committed to making an impact. While unlikely to emerge as a lockdown type in the short term, his coaching staff will know he will compete and continuously look to get better, particularly as his frame improves.

The medical examinations that NBA teams will perform on LeVert will be the most important part of his pre-draft process. Depending on how each team feels about the status of his foot, this could significantly raise or lower his draft stock. Teams will be especially cautious with his injury history, as a serious foot injury can significantly slow a player's career, as we have seen numerous times in the past.

When he has been on the floor, LeVert has proven he is a versatile passer and spot-up shooter with the potential to play multiple positions, which is very much in demand in today's NBA. If he can find a way to stay healthy in the long term, LeVert could certainly emerge as a key role player for a NBA team with all that he is able to offer. More DX Scouting Reports and Video Breakdowns:
-Louisville's Damion Lee
-Florida State's Malik Beasley
-Florida's Dorian Finney-Smith
-Cibona's Ante Zizic
-Estudiantes' Juan Hernangomez
-Oakland's Kay Felder
Read Next...