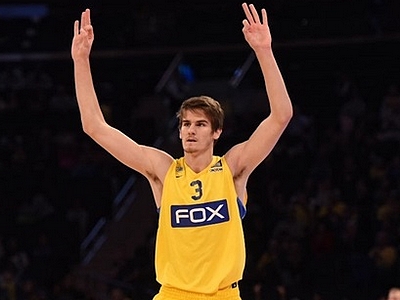 The figure is relatively small for an international player of his stature and should pose no obstacles to him joining the NBA team that drafts him June 23.

The agreement in the seven-year contract Bender signed with Maccabi Tel Aviv in 2014 has a clause that allows him to opt out and sign with an NBA franchise by paying a buyout that's twice the permitted amount an NBA team can provide, according to the NBA's Collective Bargaining Agreement.

An NBA team can contribute up to $650,000 to an international buyout for a player picked in the first round. The remaining $650,000 will be paid by Bender in a second installment at a later, undisclosed date and will come out of his rookie scale contract.

Bender is expected to be picked somewhere in the 3-7 range in the upcoming draft. His season will likely be over by June 9 at the latest if his team advances to the Israeli League finals. Bender should be able to arrive in time to conduct workouts with a number of franchises, as well as have a medical examination done on US soil. He is expected to attend the NBA Draft in Brooklyn on June 23rd.

Maccabi Tel Aviv is currently competing in the Israeli league playoff quarterfinals, where they hold a 1-0 lead in the best of five series.

Israeli league rules state that at least three spots in every team's 12-man roster must be comprised of two domestic players under the age of 22 and one under 25, which has kept the Croatian-born Bender (designated as a foreigner) off the scorer's sheet in a number of contests this season, including the playoffs this week.

Nevertheless, Bender has been scouted thoroughly by NBA talent evaluators at every level players his age typically compete, having participated in the Jordan Brand Classic in New York, the NBA Basketball Without Borders Global Camp in New York, two adidas EuroCamps, three FIBA junior championships, three Euroleague International Junior Tournaments, as well as seeing over 500 minutes in a Maccabi Tel Avi uniform at the senior level this season.

Representatives of all 30 NBA teams have been present to watch him play and practice this season according to Maccabi Tel Aviv, including the Euroleague preseason games they played against Armani Milan in Chicago and New York last October.
Read Next...