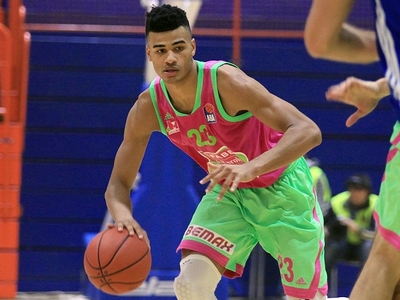 Luwawu, 20, is part of a wave of French players who left their home country for Serbia in search of playing time, development and exposure. He grew up in Antibes in southern France and spent many years in the youth system of the local club there, earning his first pro minutes in late 2012 at age 17. The club bounced back and forth between the second (Pro B) and first (Pro A) divisions, and after helping the club earn a promotion back to Pro A last June, he elected to terminate his contract and join Mega Leks in Belgrade, Serbia.

Mega Leks is a very unique club in Europe, as almost their entire rotation is built around players under the age of 22. Every player (as well as the coaching staff) is also represented by the same agency, Beobasket, who essentially built the club from the ground up as a means of developing their young talent, providing them with minutes, opportunity and all the off-court resources they need to reach their full potential. The results have been very quick to come, as the club had three players drafted in 2014 (including rookie sensation Nikola Jokic), and is in the midst of a spectacular season, currently sporting a 16-7 record and being just one game out of second place in the Adriatic League (behind two Euroleague clubs), which is shocking considering their budget and lack of experience.

Averaging 76 possessions per game, Mega Leks plays at one of the fastest paces of any team in high-level European basketball according to our database, aided by their full-court pressing style. Their head coach, Dejan Milojevic (a budding star in his own right now), borrows quite a bit from NCAA basketball he told us, as he elected to implement a Pack Line half-court defensive scheme similar to the one employed by Tony Bennett at Virginia.

Luwawu has benefited tremendously from this wide-open style of play, as he's been one of the biggest breakout performers in European basketball, going from averaging 7 points per game in France's second division to 15.5 points (second best in the league), 5 rebounds, 3 assists and 2 steals while shooting 39% for 3 in the Adriatic League.

It is very very very nice on this team. Everyone is young, everyone is on the same page. We have very good chemistry. And that's the fact on the court. We all improve each other together. Everyone is on the same page. By ourselves we made the hierarchy. By myself I am taking leadership. I think I also improved this year. I am playing a lot. I have responsibilities and time to spend on the court. For me it's the best. I am improving in practice. It is very nice. Here I have more responsibilities, and you can make mistakes. In France it's not the same, I was a young player, and if I made a mistake I needed to go to the bench. Here I am one of the oldest players. I have more responsibilities. In the beginning of the season I made mistakes, some turnovers, but I stayed on the court. Now I improved and I don't lose so many balls. Every young player needs to think about Mega Leks.

Luwawu has pretty much everything you look for in a two-way role-playing NBA wing. He has strong physical attributes for a shooting guard or small forward, standing (in his words) 6'7 without shoes, 205 pounds, with a 6'11 wingspan, and excellent athletic ability. He is very smooth and fluid, and can play above the rim with ease, sometimes in highlight reel fashion.

Luwawu has made huge strides as an outside shooter, upping his 3-point percentage this season from 29 to 39%, while tripling his total number of attempts. He's been extremely reliable shooting the ball with his feet set this season (43% in catch and shoot situations according to Synergy Sports Tech), and has also shown some flashes of being capable of coming off screens. He's also developing his ability to pull-up off the dribble, something he has the freedom to experiment quite a bit with at Mega Leks.

Luwawu is also a very good passer, demonstrating strong court vision, and the ability to distribute with either hand in drive and dish situations. He can operate at different speeds, has a powerful first step and long strides as a driver, and thus has strong potential in the pick and roll and attacking closeouts.

Perhaps Luwawu's most NBA ready attribute is his defense. He showed the ability to stay in front of point guards, shooting guards and small forwards in the game we attended, thanks to his quick feet, long arms and ability to get over screens. Mega Leks likes to utilize him at the top of their full-court press, and Luwawu has wreaked quite a bit of havoc in the Adriatic League this year with his very quick hands.

Luwawu is still working on his ball-handling ability, as he's struggled at times utilizing advanced moves and being forced to react to changing defenses on the fly. He's very reliant on his jump-shot, and is not finishing around the basket at a great rate this season, at least relative to his physical tools, posting a fairly underwhelming 43% 2P%, partially due to his inconsistency as an off the dribble shooter. His feel for the game is still catching up to his natural ability, as he suffers from mental lapses at times and can be somewhat turnover prone. His awareness on both ends of the floor leaves something to be desired as well, although part of this can be attributed to his lack of experience at the highest levels of professional basketball.

While he's been shooting the ball extremely well this season, and shows fluid and consistent mechanics that should lend to strong results, this hasn't always been the case throughout his career. Luwawu is just 138/419 (33%) from beyond the arc in all competitions we have data from historically, so there are some question marks about whether he can keep to shoot the ball at such a blistering rate when he doesn't have the same type of green light and breakneck pace he's enjoying this season.

What I need to improve is not committing turnovers. My pull-up shooting after dribbling. I can improve everything, but in particular this.

Luwawu already entered the draft last year, but didn't get much love from NBA scouts, as he was very lightly scouted in Pro B, and thus forced to withdraw. The fact that his season ran extremely late, up until mid-June, and he was unable to attend the adidas EuroCamp to showcase himself didn't help matters. Luwawu actually had a plane ticket in hand to fly to Treviso, Italy to conduct a private workout in front of an army of NBA scouts on an off day from the Pro B playoffs, but was forced to cancel it due to the fact that his ID had expired and he was not let through airport security.

That was likely a blessing in disguise, as the phenomenal season he's had in the Adriatic League seems to have catapulted his stock well into the first round, to the point that he will likely be getting looks from teams drafting in the lottery this June.

Of course my goal first is to go to the NBA. I want to be the best French player there. And why not become an all-star in the NBA.