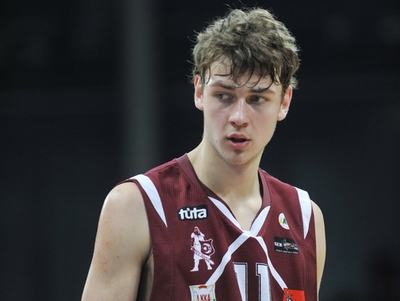 Jonathan Givony
@DraftExpress
We took some time out of our busy college basketball viewing schedule to check in on the progress of potential lottery pick big man Donatas Motiejunas, one of the few international prospects who is getting NBA executives excited in this draft.

With his team falling to 7-8 in Serie A this past weekend after yet another disappointing loss, we (along with many NBA executives) were forced to adjust our travel schedules for late February after Benetton Treviso failed to qualify for the Italian Cup/Final 8. Instead, we dug deep into the large quantity of film at our disposal thanks to Synergy Sports Technology, and came away with plenty of food for thought.

Since the last time we checked in on him in mid-November, Motiejunas minutes and role have both increased for Benetton, and hes looking noticeably more comfortable in his own skin. He starts every other game on average and sees between 20-25 minutes typically depending on the matchup.

Considering the fact that hes only 19 years old and is playing essentially his first real season of professional basketball, this is very impressive. His team is struggling (by their standards) as mentioned, being forced to call in Brandon Jennings old coach in Rome, Croatian Jasmin Repesa, to try and save the ship.

Up until the coaching change Motiejunas was looking more and more confident about putting his skill-level on display. Repesa doesnt seem to be holding him back early on, already giving him 31 minutes in their EuroCup Top 16 debut (which they lost at home). The Lithuanian responded with 17 points (7/9 FG), 5 rebounds, 4 steals and 3 assists.

With added experience underneath his belt, and a growing role, Motiejunas is quickly emerging as one of the most versatile big men in the Italian league. The place that shows up the most is on the perimeter, where Motiejunas is showing outstanding potential taking his man off the dribble in creative fashion, often spinning his way through the lane for some incredibly impressive finishes.

Able to go left or right, Motiejunas is a nightmare for most big men to match up with at his size, as he possesses an excellent first step to go along with strong ball-handling skills and terrific body control maneuvering his way towards the basket.

Hes getting to the free throw line at a very good rate, 6.4 times per-40 minutes pace adjusted, which ranks him in the top-10 in the Italian league amongst qualified players in that category.

Something to keep in mind is that his ability to create scoring opportunities out of isolation situations will be far more useful in the faster paced and more loosely called realm of the NBA. Italian league refs are notorious for being incredibly quick to call traveling violations (particularly on rookies like Motiejunas), and there were a number of whistles that we saw on film that would not have been ruled as such in the NBA.

Motiejunas is also looking a little better in the post these days, appearing more comfortable here now than he did in the past. His outstanding footwork combined with his terrific agility and quickness allows him to create his own shot with relative ease, often to transition into a beautiful jump-hook shot, which he can execute with either hand. His touch around the basket and overall feel for scoring remains extremely impressive for someone his age, as its pretty clear that were talking with an exceptionally gifted offensive player with a huge upside to continue to develop on this end of the floor.

On the downside, Motiejunas jumper has not been falling very regularly at all, as hes converted just 8 of the 27 jump-shots hes attempted this season (6/21 3P) according to Synergy Sports Technology, and 46/76 free throw attempts, good for 60%. Looking at his shooting mechanics and the terrific touch he displays around the basket, you have to imagine that its only a matter of time until his shots start falling from the perimeter.

While Motiejunas leaves an incredibly strong impression with the talent hes displaying on the offensive end, his work defensively and on the glass cant be described as anything less than worrisome. Possessing average fundamentals on this end of the floor, Motiejunas is somewhat of a liability when attempting to defend on the perimeter. Hes extremely upright in his stance and shows very little in the ways of hustle or awareness, getting burned repeatedly in the film we took in.

His lack of strength is a major issue, but so is his extremely poor balance, as you regularly see him being knocked to the ground in every game he plays in. He gets pushed around by smaller players fairly often, giving up deep position in the post, and in turn easy baskets.

He remains an incredibly poor defensive rebounder, grabbing just 46 defensive rebounds in 448 total minutes, or one for every 10 minutes hes on the court. Although rebounds are tougher to come by in Europe than they are in the NCAA, its tough to ignore the fact that he ranks amongst the worst defensive rebounders in his own league on a per-minute basis.

What we must keep in mind at all times is that Motiejunas is still only 19 years old, and has plenty of room to add enough strength to his very solid frame. This added bulk will help him compete much more effectively against most of the big men hell encounter in the NBA, but it may take some time for him to fill out. At this point Motiejunas may be considering staying another season in Benetton, as he still has another year on his contract that he signed this past summer. With at least four months remaining in Benettons hectic schedule, including the top 16 round of the EuroCup, and possibly the Italian league playoffs, there is still a long ways to go.

NBA scouts will be paying close attention in particular to Benettons two matchups with fellow draft prospect big man Tibor Pleiss of Bamberg next week and in March.
Read Next...