Finding a Niche for Kevin Seraphin 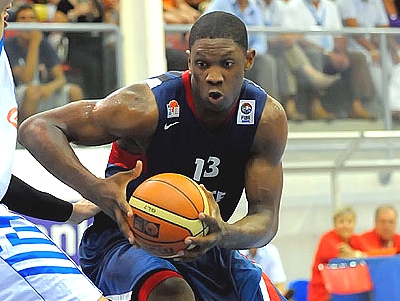 April 29; San Antonio, Texas; Game 6 of the Western Conference Quarterfinals. 6-2 combo guard Rodrigue Beaubois comes off the bench to score 16 points in 21 minutes and spark the Mavericks to overcome an 11-point deficit  a lift that gives Dallas a chance to win the game and force a seventh game.

What do these players have in common? Both are French; both are super-athletic, physical specimens at their position; and both were severely undervalued in their respective draft classes.

The thought of whiffing on Beaubois and Batum in consecutive years in the late portion of the first round has to be keeping NBA teams up at night, watching film of the next great French athlete, determined not to make the same mistake again.

Seraphin is not a perimeter player like his future French national teammates, but he is similarly gifted from a physical standpoint, and he just happens to be represented by the same agent, Bouna Ndiaye. Ndiaye surely knows how to push the right buttons. The Senegalese-born, and incredibly jovial, Dallas native doesnt need to say much more than I dont want you to make the same mistake again my friend in his cheerful French accent to strike fear in the hearts of NBA personnel these days.

He may not even need to say that though. Seraphins case as an NBA prospect is made as soon as he steps foot on the court. He stands around 6-9 without shoes, has a huge wingspan, and sports a chiseled 268-pound frame. He runs the floor well, gets off his feet with ease and ranks as one of the top per-minute rebounders and shot blockers in the ultra-athletic French Pro A League.

Seraphin is still far from a finished product though.

A native of French Guiana, a colony on the northern coast of South America, he only started playing basketball at the age of 15 and has been in France for just four years now. He was discovered in his native country by Cholet junior team coach Jean-Francois Martin after growing up as a soccer player. In the years since, he has slowly but surely developed from project to prospect to a starter this season (in 13 of the last 20 games) on the top-ranked team in France.

Seraphin played just nine minutes per game in 2008-09 and barely saw minutes on the French junior national team the summer prior. He rode a strong showing in the U-20 European Championships this past July to a bigger role this season with Cholet, becoming a more prominent part of the rotation and landing a spot in the starting lineup in each of the last nine games.

Hes still averaging just over 16 minutes per game, but Seraphin has improved in virtually every statistical category this season: upping his scoring numbers, getting to the free throw line more often, doing a better job on the glass, contributing more as a shot blocker, doubling his assist rate and cutting down on his turnovers.

Offensively, Seraphin remains a raw prospect by NBA standards. He does a good job using his body to carve out space in the post (where he can finish above the rim in impressive fashion thanks to his tremendous length), but he is still lacking in terms of advanced footwork and post moves. He looks a bit limited at times when double teams arrive and hes forced to improvise or make quick decisions.

Seraphin has good hands and is a terrific target for lobs and pick-and-roll finishes, but hes not the type of player you want making plays with the ball at this point in his career. Improving his repertoire of spin moves, pivots and countermoves in the post will go a long way -- as will gaining experience and improving his all-around feel for the game.

With that said, Seraphin shows interesting potential with his jump hook. Hes able to get it off smoothly and convert it with either hand. He also appears to have a soft touch around the basket, particularly with a good-looking turnaround jump shot that he executes with a high release point.

Seraphin clearly has things to work on. His activity level and intensity seem to fluctuate quite a bit from game to game (leading to some inconsistent performances), he has limitations stepping away from the basket, his ball-handling skills are crude, and his mid-range jumper is very much a work in progress  all hints that his future position is clearly center, where his bulk and length should compensate for the inch or two he lacks in prototypical size for an NBA 5-man.

Defensively, Seraphin is much more useful at this point. He shows a much greater comfort level on the defensive end, where hes a terrific presence inside the paint with his superb combination of length, strength and athleticism. He displays nice timing when rotating from the weak side and is especially effective at hedging pick-and-rolls, while still having the mobility to recover back onto his man thanks to his nimble feet and nice lateral quickness. Hes difficult to post up due to his wide frame, and he puts in a good effort on top of that. This puts him in a pretty rare class of prospects when considering his physical tools.

With that said, Seraphins inexperience shows on the defensive end as well.

He displays only average awareness and tends to leave his feet on pump fakes, causing him to get into foul trouble on occasion. From time to time he gets caught flat-footed watching a defensive rebound fly over his head. Hes not quite as effective in this area as you might hope, considering his tools. This is likely due to his so-so fundamentals. Seraphin is an incredible presence on the offensive glass, though, ranking in the Top five in France in offensive rebounds per-40 minutes.

Having only played basketball for five years, Seraphin is still very much playing catch-up with other prospects his age, but he is making up ground rapidly. His ceiling is extremely high, and hes rumored to be a smart and humble player -- which is always a good sign. 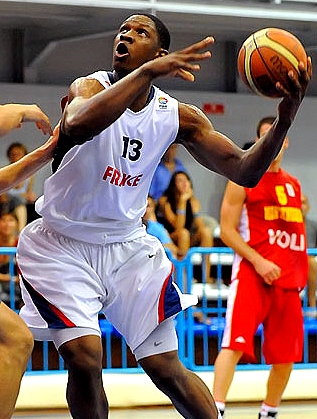 Seraphin has the flexibility of coming to the NBA immediately or staying for another year in France. Hes supposedly open to either option. He signed a three-year contract with Cholet last summer, but he has a clearly-stated NBA out clause with a buyout sum that escalates depending on how high hes picked. The buyout cannot exceed $750,000.

He is also drawing heavy interest from some of the top teams in Europe  Barcelona, for example  but reportedly has his heart set on playing in the NBA.

Seraphin has until June 14 to decide whether to keep his name in the draft or pull out and become automatically eligible next year. The NBA teams evaluating him will need to decide how much they think he can improve in the next year or two, and whether being patient and drafting him now (in the late teens to early 20s portion of the first round) will get them good value down the road. Were talking about a player who is still in a very early stage of his development. If he improves as much as expected, he could very well work his way into the lottery next season. On certain NBA teams draft boards, he could already be there right now.

The final call will likely be made based on the types of organizations showing interest. His agent Ndiaye has done a good job in recent years of steering clients to places he thinks they can develop -- such as Portland, Dallas and San Antonio -- and hell probably take a similar route this time around with Seraphin.

From what Ndiaye told us in Paris this week, hes feeling increasingly comfortable with the information hes receiving from NBA teams in terms of keeping Seraphins name in the draft. Look for NBA GMs to spend quite a bit of time in the next month or so in France trying to get a better handle on Seraphins draft prospects. He holds invites to both the NBA combine and the adidas EuroCamp in Treviso, but appears unlikely to be able to accept either due to the fact that his team will be playing in the playoffs until as late as mid-June.

Although this draft is stacked with big men, Seraphin has characteristics that put him in a rare class for todays NBA game. The future of the French national team clearly looks extremely bright.
Read Next...