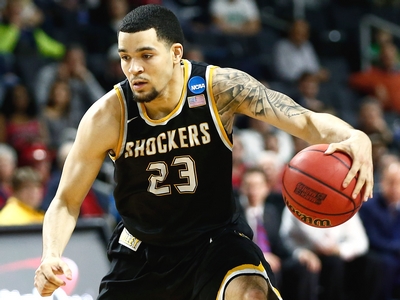 Fred VanVleet, along with backcourt mate Ron Baker, built quite a legacy during their four year career at Wichita State. VanVleet earned three MVC All-Conference 1st Team distinctions plus two conference player of the year awards, and leaves Wichita State as one of the winningest players in program history. 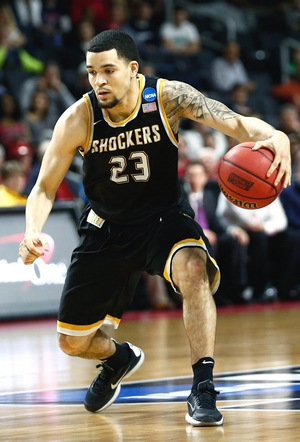 A steady hand at the point guard position, VanVleet has shown he can be a coach on the floor by being the conductor of an efficient offense, while averaging a solid 16.8 points, 4.4 rebounds and 7.6 assists per 40 minutes. He never gets sped up with the ball and doesn't get fazed by ball pressure or double teams. He keeps the offense flowing and his 7.03 pure point rating is fourth best among all prospects in our top 100. He doesn't turn the ball over by trying to make highlight reel passes, but he takes care of the ball and has displayed great vision and feel for the game as a creator for his teammates.

VanVleet was measured at 6'1 in shoes during the 2015 Pan Am Training Camp with a 6'2 wingspan, which puts him below average in terms of height and length compared with most NBA point guards. He isn't a great athlete either, as he doesn't possess a high top speed or a quick burst, but he has an exceptionally high basketball IQ, can operate at different speeds and utilizes his strength well to make an impact in the half-court. VanVleet will have to prove he can translate his effectiveness against the more physically gifted guards he'll encounter at the professional level, but his feel for the game, on-court presence and stable demeanor will help his chances tremendously.

VanVleet is a pick and roll maestro, with 58% of his total possessions logged by Synergy Sports Technology derived from him running the pick and roll. He's an expert at using the ball-screen to create space to get inside the arc to make play, often by looking to get his teammates into space to shoot by delivering accurate, on point passes to the roll man, cutters or spot-up shooters. He turns the ball over on just 5.9% of pick and roll possessions and is never rattled no matter what level of pressure the defense throws at him. With the NBA being such a ball-screen heavy offense, VanVleet certainly has the chops to create some points from this play type while he is on the floor.

The key to VanVleet's effectiveness running an offense, despite not possessing exceptional size or athleticism, are his terrific ball-handling skills, coupled with his propensity for changing gears and keeping defenders off-balance. He operates at a pace that is unique to him, handling the ball on a string and finds a great mix between scoring and playmaking.

His best chance to score off ball screens is by pulling up for a jump shot, usually a three point attempt off the dribble. He shot 37.9% on 66 jump shots off the dribble logged by Synergy Sports Technology. He's also a fairly decent spot-up shooter, converting 38.1% of his attempts in his senior season with his attempts split fairly evenly between the two shot categories. The majority of these are three point attempts when he has the space to shoot with only 41 jump shots inside the arc as recorded by Synergy Sports Technology.

When he penetrates into the paint, he prefers to pass out rather than shoot because he isn't a great finisher inside the arc with a paltry 39.6% two point field goal percentage. third lowest among prospects in our top 100. While this poor mark does not fully remove him from draft consideration, since 2000 only Josh Selby and Andrew Harrison have been drafted while converting less than 40% of their two point attempts in the same season. To VanVleet's credit, he did shoot 45% from 2-point range in his college career as a whole.

With his below average tools, VanVleet struggles to get his shot off at the rim and can't always create space to attempt a floater before he reaches the restricted area. While he can get his defender on his hip to give him room to make a pass off the dribble, he rarely has enough separation for a shot attempt either close to the rim or as a pull-up two point jump shot. He will have to combine a three point jump shot off the dribble with his superb passing ability to be a multifaceted offensive threat.

VanVleet was one of the best defensive point guards in college basketball, but there are some question marks about how his below average size and length will allow this part of his game to translate to the professional level. He's constantly talking to by calling out plays and directing his teammates to where the action is heading. He can also pick up the ball before halfcourt to tire out his opponent and burn the shot clock by putting some pressure on the ball. He generated 2.5 steals per 40 minutes pace adjusted with his quick hands on the ball and will definitely provide some energy and toughness defensively.

Although VanVleet may not have prototypical size and athleticism for his position, he is a winning point guard who has plenty of intangibles a team could fall in love with, which could help easily help him earn a roster spot. He has a number of attributes NBA teams look for in backups, with his ability to make shots, find the open man, defend with toughness and keep mistakes to a minimum. Those are skills NBA teams value, and VanVleet could certainly play his way onto a NBA team when it's all said and done.
Read Next...