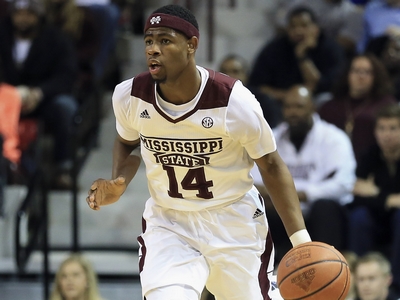 Mike Schmitz
@Mike_Schmitz
Malik Newman struggled somewhat coming out of the gates for Mississippi State, posting a near 1/1 assist to turnover ratio and a fairly mediocre 17 PER (4th worst among all collegiates in our Top-100 rankings).More DX 2015-2016 Season Video Breakdowns
-Ben Simmons vs Kentucky Video Analysis
-Buddy Hield's 46 point Explosion vs Kansas
-Kay Felder Strengths and Weaknesses Breakdown
-Tyler Ulis vs Louisville Video Analysis
-Pascal Siakam vs Baylor Video Analysis
-Ben Simmons vs Henry Ellenson Head to Head Matchup Analysis
-Karl-Anthony Towns vs Kristaps Porzingis Head to Head Matchup Analysis
-D'Angelo Russell vs Emmanuel Mudiay Head to Head Matchup AnalysisWhile he had played somewhat better as of late, Mississippi State sported just a 7-7 record going into last night, with a non-conference strength of schedule ranked 288th according to KenPom, both of which leave a lot to be desired at this point in the season.

Last night Mississippi State traveled to play one of the most talented teams in the NCAA in Kentucky, which is an excellent opportunity to evaluate Newman against high-level competition and see how he's adapting to the college game.

Mississippi State fell behind by 20 points in this contest, but made it a one-possession game with 75 seconds to go, even if Newman was largely off the floor during their comeback run. Kentucky prevailed 80-74 behind big games from their guard trio of Tyler Ulis, Jamal Murray and Isaiah Briscoe, while Newman had a decent outing himself, with 14 points, 4 assists and 1 turnover, shooting 1/3 for 2, 2/4 for 3 and 6/6 from the free throw line.

Mississippi State now has 15 SEC games left on their schedule to try and salvage their season and not be left sitting at home in early March.

Via Mike Schmitz, here's a five minute video breakdown of some of the more notable things NBA scouts were able to see from Malik Newman last night, both good and bad, on either end of the floor.